join us donate
LOG IN or SIGN UP
Liquid syntax error: Error in tag 'subpage' - No such page slug join
find a vendor
May 07, 2013

All eyes on me: Cory Schneider ready to help the Canucks bounce back for a long playoff run 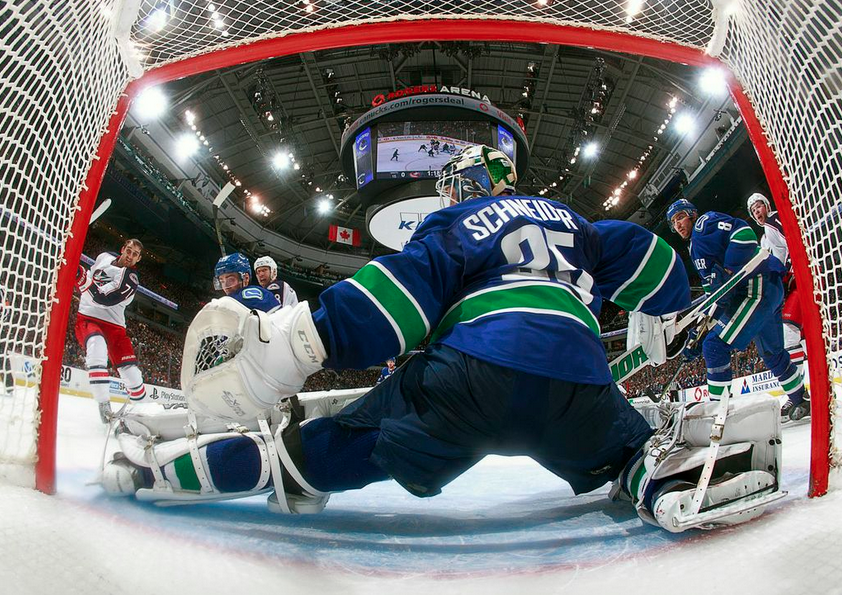 Goaltender Cory Schneider is the Vancouver Canucks’ main man between the pipes, edging out charismatic but inconsistent Olympic gold medalist Roberto Luongo while still managing to make light of their public pursuit for No. 1. Schneider has recorded five shut-outs on his way to becoming one of the most popular players with fans of the Vancouver hockey club.

The 27-year-old Boston College graduate is a smart conversationalist who pays attention to the world outside the rink. He effortlessly dropped a reference to baseball’s supernatural pitch, the knuckleball (“I’d just block it,” he quipped) during our interview and, later in the week, he mourned the shattered peace of his hometown following the violent attack at the Boston Marathon on April 15. “It puts it in perspective that the game is just a game when those other things are much more pressing,” he told The Province newspaper.

With the Canucks clinching a playoff spot but hitting a rough patch offensively in the first round, Megaphone reached Schneider while he was on the road to talk goaltending, this year’s edition of the Canucks, and his mindset entering the NHL playoffs as the team’s No.1 man. This interview has been condensed.

MEGAPHONE: Goalies have a reputation for being quirky athletes. Do you fall into that category?

Cory Schneider: I try not to—I hope I don’t! Some guys around the league might. I try to be pretty laid back and pretty normal. I have my things that I need to do to be ready, but overall I’m pretty approachable and easy-going and I think the guys appreciate that they can just talk to me and treat me like any other guy. They don’t have to worry about distracting me or throwing me off my routine.

M: You’re not too superstitious?

CS: No, no. Doing the same routine, some people may call superstitious but I find the way I get ready for games works for me so that’s the routine I follow. I really liked what he says here about guys knowing they can talk to him because they know it won’t distract him. That was a very interesting comment. I think it can go in. If not, this whole exchange can go.

M: It seems to me that the Canucks have a friendly locker room.

CS: Yeah, we get along really well. I think it all starts with the core group of players: the Sedin twins [Daniel and Henrik], Kesler, Bieksa, Burrows, those guys who have all been together for seven, eight years now. They all trust each other, respect each other and I think when you come into that room you have to follow those guidelines. We don’t have a guy or two who keeps to the outside. Everyone’s included. It’s a very friendly locker room.

M: Have relationships changed for you as your role has become more prominent?

CS: It’s been good. It’s been great to get to know some of these guys and even some of the guys they’ve brought in along the way have fit in very well. It’s a good mix of older guys and younger guys and guys with kids and guys without kids and so I think everyone sort of knows each other’s families at this point, you know people’s kids, you know their wives and girlfriends. I think that brings us even closer but, yeah, I think as I’ve become more comfortable I think I’ve revealed more of my personality and I try to get to know some other guys a little bit better.

M: By the way, congratulations on your recent engagement. 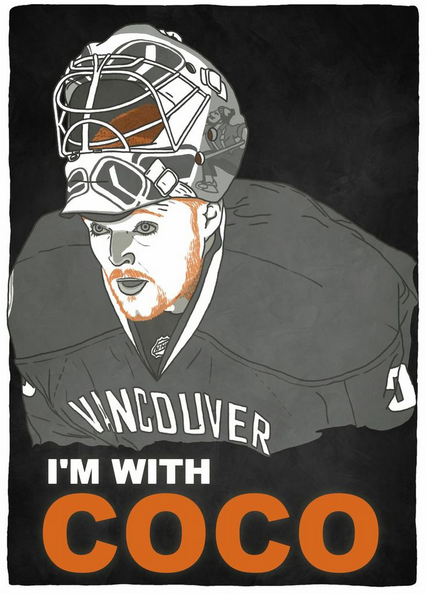 M: Your goals against average (GAA) has been improving consistently month to month of this shortened season. We talk about the Canucks being a typically slow starting team and now that you’re starting to roll, what kind of momentum are you carrying into playoffs?

CS: It’s a good thing. We’re heading in the right direction. I’d rather us be hitting our stride and playing well this time of year as opposed to the first month of the season. In the shortened season, all the games count and we had to be sharp to start the year. It’s good to get on a roll like this and be playing the way we want to play. There have still been stretches where we’ve had a lot of injuries and not been able to play the way we’d hoped to, but I think we’re really settling into our lineup and our role and the style of play we want to engage in and you’re seeing results.

M: Before you sat out with the flu, you were on a 9-2 winning streak going back to March. I imagine your growing confidence is one reason for your strong play, but what does it mean for you to now be solidly the Canucks No. 1 goaltender?

CS: It’s a good feeling. It’s something I’ve been striving for and trying to become ever since I was drafted by them almost nine years ago now.

M: How did you cushion your disappointment at the start of the season when the No. 1 spot was not exclusively yours?

CS: I don’t think there was disappointment. I think anywhere you play you need to earn the job, you can’t just be given the title and then go out and not play well and expect to maintain your job. That’s why this is the National Hockey League. Someone is always trying to take your job. They’re always looking for guys who can play better than you can. If I wasn’t playing well enough to earn the role exclusively, then that’s on me—it was up to me to be better and play better— nobody else.

M: At the start of the season we were talking about goaltending a lot and it seemed from the outside that it was a competitive and even tense situation, but both you and Luongo made light of this, for example, in a TSN skit. I’d like to know how humour has played a role in your relationship.

CS: We were always pretty easy-going about this whole scenario with each other and we’re pretty laid-back, lighthearted guys. I think Lu [Luonogo] started to reveal more of that side of himself in the past year and that’s usually how he is. He’s very serious about his job and playing hockey but when he’s off the ice, he’s always making jokes and not such obvious humour, which I think makes it even funnier.

He and I have supported each other, we want the team to succeed whether it’s me or him. We ‘ve come to the conclusion together that we can both get the job done and we trust each other. I think that’s been very important throughout this whole thing and I can’t say enough about him and how good he’s been to me and how much he’s looking out for my best interests, not his own.

M: I think that’s remarkable. Do you think your relationship or bond, if you would call it that, is unique in the NHL?