join us donate
LOG IN or SIGN UP
Liquid syntax error: Error in tag 'subpage' - No such page slug join
find a vendor
June 17, 2014
by Stefania Seccia follow this author
photos: Kristian Secher

Rik Mountain (above left) and his teammates from the Woodward’s street soccer team support each other in a cheer during the Canada Street Soccer Cup. Mountain and other Vancouver players have travelled internationally to represent Canada at the Homeless World Cup in Brazil and France.

Ten years ago it was just a few people, pavement, a ball and an idea—that playing soccer could be a therapeutic and recreational outlet for people living vulnerable lives. Since its first teams formed in 2008, the homeless street soccer movement has become a venerable force in Vancouver. The latest in its long line of international accomplishments: local teams hosted the first-ever Canada Street Soccer Cup in North Vancouver at the end of May, staking their claim in a national movement that has brought hundreds of people together to enjoy sport, community, and work towards a better life.

Over the last decade, street soccer in Canada has seen more than 300 players develop their skills through street soccer programs in Vancouver, Toronto, Montreal and Calgary. Many have also made it to the Homeless World Cup, an international tournament held each year. Vancouver’s street soccer teams have played at the homeless world cups in Milan, Italy (2009), Rio de Janeiro, Brazil (2010), Paris, France (2011), Mexico City, Mexico (2012) and Poznan, Poland (2013). This year, the Homeless World Cup celebrates its 11th year with a tournament in Santiago, Chile.

This spring, the North Shore Shields helped host the Canada cup in North Vancouver from May 28 to 31. Ten teams and about 100 players from across B.C. and Canada battled it out on the fields.

Denis Dudea has been playing on and off with the Shields for the last four years. In that time, he says he’s turned his life around, thanks to his involvement with street soccer.

“I’ve played soccer for 20 years,” he says. “When I was in high school, I got expelled. I was heavy into drugs and I aged out of my foster homes. I ended up in a North Vancouver shelter.”

But life’s not the same struggle it was for Dudea. Now he lives with his girlfriend and their dog, Tiny, the unofficial mascot for the Vancouver Street Soccer League. He works at a North Vancouver warehouse.

“It’s grown a lot so far,” he says of his involvement with street soccer. “When I first started, only a few people would show up, people were in and out.”

That’s now grown into at least 20 people in North Vancouver who show up consistently, according to Dudea.

Just one of the opportunities Dudea took advantage of was being on the Canadian team for the Homeless World Cup in Poland a few years ago.

“Hands down, that was one of the best experiences of my life,” he says. “I built lifelong memories, and I made friends in Poland I still keep in touch with. It’s a self-esteem booster. I got to play for Team Canada.”

“It’s not just about soccer”

Dudea was introduced to the league by Charles McGregor, who’s been a part of putting people on the field with a ball for the last 10 years. McGregor says he got the idea to do a national cup about a year ago and worked since then to make it a reality.

He started with marginalized kids between nine and 11 years old by giving them a soccer ball to kick around through his North Shore Alliance Church. He went from having two kids to 25 playing every week.

“Our saying at the church is to focus on the ball,” he says. “Kick the ball around, control the ball, have fun with it. I’ve had players who have never kicked the ball before and they’re here for three days to have fun, eat and forget everything else.”

For the three days players dedicate to the cup, they’re only asked to play dry—that means no drugs and no alcohol while on the field, McGregor says, otherwise “they’re spoiling it for everybody else.”

“It’s for them to get out of their room and off the street,” he says. “When I have a meal for one of my practices, I have my team, we get together and the players talk. They might have a problem that this other person’s had, but they solve their problem. It’s not just about soccer.” 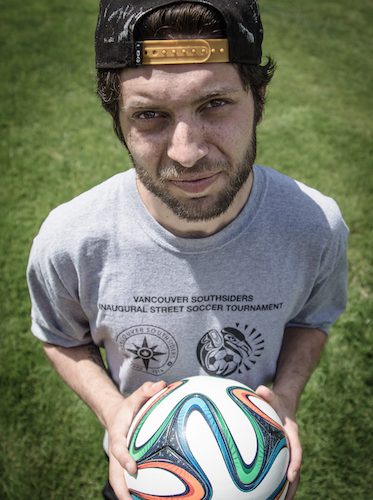 A place for reinvention

The purpose of the street soccer league is to bring out the strengths of the players and engender a sense of hope and togetherness. It’s also an avenue to raise awareness about poverty, homelessness and addiction.

Paul Gregory is the executive director and founder of Street Soccer Canada. He says he’s watched many men and women go through his organization, which started in 2004 and became a charity in 2008.

“It’s huge numbers now,” he notes. “I mean, when it was 2004, it was me in a van going around to shelters begging people (to play). That’s essentially what it was.”

Every year, he scouts for eight players who are interested and have the ability to travel to a Homeless World Cup.

“There’s some real talent here,” Gregory says. “We have more players. We could take two teams or three teams (to Chile).”

Not only is soccer an affordable sport to play, Gregory says, but it also allows players to reinvent themselves on the field.

“You take something away from someone, whether it’s an addiction or whatever it is, you’ve got to fill it with something else,” he says. “This just happens to be something. It doesn’t work with everybody, but it’s a piece of the puzzle that is a component of what engages people.

As for the rise in popularity, Gregory says there could be a chance to get more organized in the various provinces with the growing amount of players and teams across the country. While it’s a loosely connected network that
strings back to his organization, street soccer continues to grow in popularity.

“I got back on my feet through soccer”

For Rik Mountain, a player with the Woodward’s team who also attended the national cup, soccer is about getting out of routine and doing something different. He’s been playing with the Vancouver league since 2009.

“I used to be down in the gutter,” he says. “I got back on my feet through soccer.”

Mountain, who had his four-year-old son watching from the sidelines during the cup tournament, says he plays because he gets to be more active and the sport is an affordable form of both recreation and exercise.

“I love it,” he adds. “I get to meet new people on the street. You get people who come up and say, ‘I can’t play.’ Then you kick them the ball and the next thing you know they’re playing and you’ve got a new friend.”

Mountain says before playing soccer he was out in the Downtown Eastside selling drugs and living a hard life. But thanks to transitioning to a healthier lifestyle, he played for the Canadian team at the homeless cup in Brazil in 2010 and now he’s training for a full marathon.

“I’m glad it’s expanded now,” he says. “Everybody comes together and plays. It’s one of the best things that ever happened to me—my kid and soccer. They helped straighten my life out.”