join us donate
LOG IN or SIGN UP
Liquid syntax error: Error in tag 'subpage' - No such page slug join
find a vendor
January 16, 2012 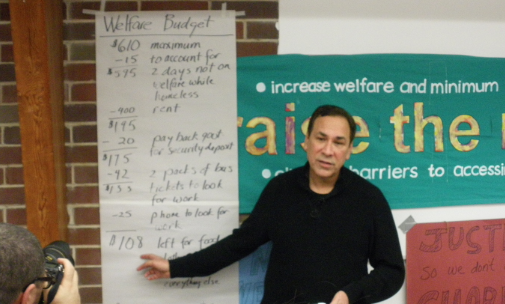 This January, New Democrat MLA Jagrup Brar joined the ranks of the province’s poorest by deciding to live on just $610 for the month—the welfare rate for single, employable individuals. While some had decried the act as a publicity stunt, Brar’s month of scarcity offers us the opportunity to look at how badly the province’s welfare system needs to be fixed.

Twenty-five years after NDP MLA Emery Barnes lived on welfare for a month, Brar, who is the MLA for Surrey-Fleetwood, decided to take on a welfare challenge issued by anti-poverty organization Raise the Rates in order “to experience first hand what life is like being on welfare or in poverty.” It didn’t take long for him to see how dismal it can be.

Less than a week into his journey, Brar was moved to tears when confronted with the conditions of the apartment he was looking to rent. Of the $610 given to welfare recipients, $375 is allocated for shelter (which goes straight to the landlord). And as anyone who rents in Vancouver can attest, that isn’t going to get you anything more than a hole in the wall—literally, as Brar discovered.

The BC Liberal government boasts that the province has the third-highest welfare rate in the country. But that’s not saying much. While New Brunswick checks in at just $294 a month, the rest of the country’s welfare rates range from $505 in Manitoba to $693 in Saskatchewan. It also doesn’t take into account that B.C. is home to one of the most expensive cities in the world, Vancouver.

What Brar’s month on the dole will hopefully highlight is not only how hard life is on welfare, but how onerous it is to qualify for it and how difficult it is to get off. Before someone is granted welfare, they must go through a lengthy qualifying period, proving to the ministry that they were looking for, but cannot find, work. And they can’t have more than $150 in liquid assets (ie. money). All of which means that one has to be completely broke and without any options before they’re given support.

Once they’re on welfare, there are no earning exemptions. Every dollar made (by returning bottles, selling Megaphone, etc.), is taken off their next cheque, making it nearly impossible for anyone to get part-time work as they try to reenter the labour pool and thus trapping them in the system.

It’s unfortunate that it takes a politician to get the media interested in welfare. If only the cameras followed every welfare recipient through their day-to-day struggles so we could all see how arduous that life was.

But if people didn’t know how broken our welfare system was before, hopefully Brar’s story will show them that it’s in desperate need of reform. It’s time the B.C. government changed its welfare policies to help move people out of poverty, instead of sentencing them to a life in it.