join us donate
LOG IN or SIGN UP
Liquid syntax error: Error in tag 'subpage' - No such page slug join
find a vendor
January 29, 2014 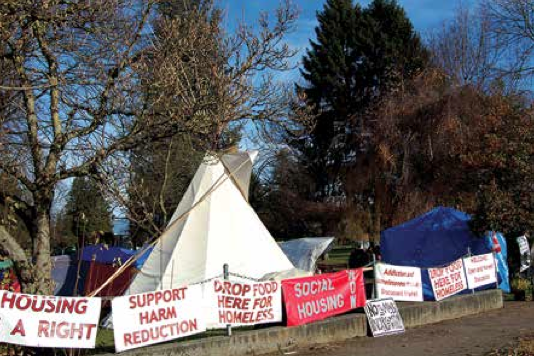 Despite the City of Abbotsford’s heavy-handed attempts to shut down homeless camps, those who took up residence in Jubilee Park are not going away. And as homelessness continues to grow across the suburbs, cities like Abbotsford need to learn that the only way to solve this problem is by bringing the homeless inside.

Over the past few years, the City of Abbotsford has aggressively tried to drive homeless people out of the makeshift camps that spring up across the city. Bylaw officers spread chicken manure across one camp last June, while police officers have allegedly slashed and pepper-sprayed tents.

Tensions came to a head in October when a group of homeless campers moved into Jubilee Park. After a long public battle the city received an injunction to remove them right before Christmas. Despite the city’s efforts, at least three new homeless camps have sprung up since Christmas.

Instead of recognizing the futility of battling the camps, the city has decided to escalate its fight with sweeping civil rights violations. It has completely fenced off Jubilee Park so no one can use it, and is seeking another injunction that says noone can set up a tent or camp in any park in the city. The city’s bylaw defines a park as any public space, which would effectively make homelessness illegal in Abbotsford.

Pivot Legal Society lawyer DJ Larkin argues that the harsh response is most likely unconstitutional, and she plans to fight the city in court. Beyond the constitutionality, however, Abbotsford’s decision to take such drastic measures to address its homeless crisis neglects the reality on the ground. According to a 2011 homeless count, there are at least 117 homeless people in Abbotsford, but only 20 adult shelter beds in the city (approximately 40 during extreme weather warnings).

Making matters worse, the limited housing that exists isn’t accessible to everyone. The men’s housing is recovery- based, which means people with addictions aren’t admitted. Others might be denied a shelter bed elsewhere because they’ve hit their 30-day stay limit or have a pet.

City council will hear a proposal later this month for the creation of some much-needed low-barrier men’s housing, but the downtown business association has already publicly opposed the plan. If the city rejects the proposal, it will just mean more camps.

As the cost of living increases in Vancouver, homeless people are getting pushed out of the city. Homeless count trends show homelessness will rise in Abbotsford, just as it will across the suburbs. Abbotsford has to start accepting this reality, and plan to accommodate the homeless instead of violently pushing them away.