join us donate
LOG IN or SIGN UP
Liquid syntax error: Error in tag 'subpage' - No such page slug join
find a vendor
July 25, 2014
by Sean Condon follow this author
photos: Canadian Centre for Policy Alternatives

Ending Poverty in British Columbia Will Save Us Money

Living with poverty is hard. It hurts people’s health, education, and living conditions. It’s also incredibly expensive. Every year, poverty costs British Columbia up to $9.2 billion. Like most provinces in Canada, however, the B.C. government could enact a plan to end it—saving the province up to $6 billion a year. But Premier Christy Clark continues to ignore calls for a poverty reduction plan, wasting taxpayers’ money as one in 10 people in the province continue to struggle in poverty.

Despite its wealth, British Columbia has the highest poverty rates in Canada, with 10.7 per cent of the population living below the poverty line. B.C. also has the country’s highest child poverty rate at 11.3 per cent. This is an embarrassment for a province so rich from natural resources. 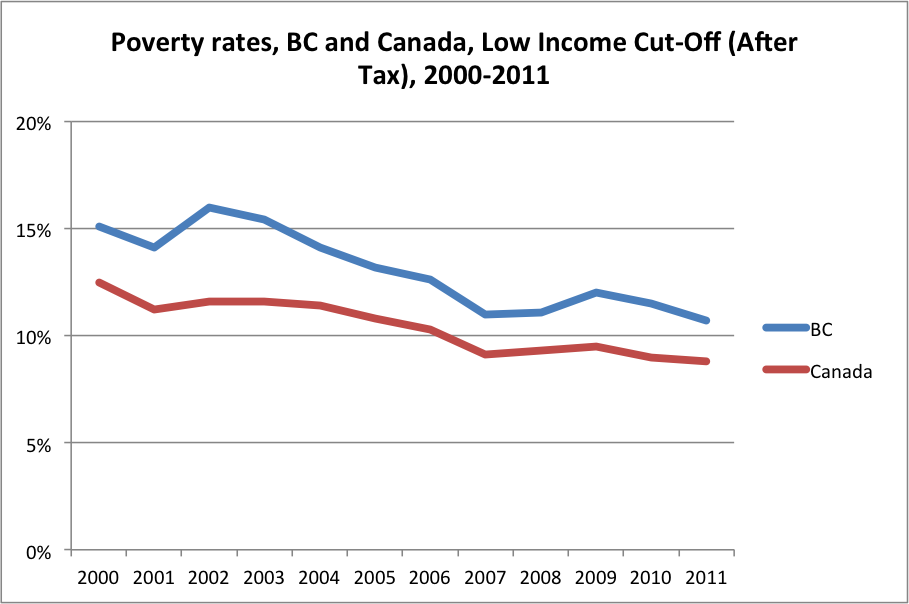 Poverty hurts a person’s well-being. It limits their access to healthy food and housing, adds additional stresses to their mental health, and weighs on their self-esteem. Poverty also limits a person’s potential. It creates barriers to education and employment. This all adds up and takes its toll on the economy.

According to a 2011 report by the Canadian Centre for Policy Alternatives (CCPA), between health and crime costs and lost productivity, poverty sets back British Columbia between $8.1 billion and $9.2 billion a year. This is equal to 4.7 per cent of the province’s Gross Domestic Product. It’s a sizable chunk of the economy. But this can be addressed.

The CCPA report included a plan calling for increased income support, more affordable housing, universal child care, and increased employment and education training that would cost the government between $3 to $4 billion a year. Even though those supports would ultimately save the province up to $6 billion a year, Premier Christy Clark says the increased spending is unaffordable. Something isn’t adding up.

Last May, the NDP’s social development critic Michelle Mungall introduced the Poverty Reduction and Economic Inclusion Act to the legislature. The NDP proposed a dismal poverty reduction plan during last year’s election, and this latest act is vague on details. But by asking the government to begin working towards a plan, it’s a good start.

Along with Saskatchewan, B.C. is the only other province that does not have a poverty reduction plan or is committed to creating one. It’s not as though it’s a radical idea. But Clark continues to reject calls for such a plan, saying her government’s plan to end poverty is by creating more jobs.

The BC Liberals have made some progress on reducing poverty over the past decade, but their refusal to come up with a comprehensive plan is stubbornly dogmatic and a detriment to both the province’s and its citizens’ potential.

As a member of the BC Poverty Reduction Coalition, Megaphone supports its call for the government to support the Poverty Reduction and Economic Inclusion Act. I’d like to encourage you to get on board by visiting BCPovertyReduction.ca and sending a letter to the premier saying the same.