join us donate
LOG IN or SIGN UP
Liquid syntax error: Error in tag 'subpage' - No such page slug join
find a vendor
September 11, 2013

YouTube video shot in late July of the anti-gentrification picketing outside the Downtown Eastside (DTES) restaurant Cuchillo sums up the atmosphere of the protests: a male customer blows smoke in the face of a picketer while a woman records it on her cell phone. When another picketer intervenes, the woman spits in her face.

Kim Hearty, the protester who intervened, told Megaphone the woman shoved her when the two were out of the camera’s view. In the video, you can hear Hearty say, “Don’t touch me, that’s assault. You just shoved me,” from off camera.

“[After the shove] she said, ‘Do you want to kiss me?’ and I’m like, ‘What? No! Get the fuck out of my face!’ and then she spat on me,” said Hearty. The spitting is caught on camera.

The incident is the latest in the escalating conflict between protesters and restaurant patrons. Pickets have been occurring since July 5 at Cuchillo and since February 1 at Pidgin, a restaurant across the street from Pigeon Park. The protesters, a mix of DTES residents and anti-poverty activists, say the restaurants are an example of gentrification that is pricing out low-income residents.

Vancouver police are currently investigating an act of vandalism against Cuchillo from early August when one of the restaurant’s glass doors was smashed. The investigation is still ongoing, but in an email to Megaphone, VPD spokesperson Const. Brian Montague wrote, “There is no evidence at this time that would suggest or link the incident to any of the on-going disputes or protests.”

However, charges have been laid with regards to Pidgin’s complaints against the protests. Hearty, arrested in June for allegedly assaulting Pidgin co-owner Brandon Grossutti, has been abiding by a no-go order preventing her from coming within six blocks of the restaurant. In May, another protestor, Robyn Pickell, was arrested for allegedly trying to padlock Pidgin’s doors. Protesters have also been accused of aggressive tactics towards customers.

“We don’t start off on an aggressive note [with customers], said Hearty. “But when people just show so much disregard and willful ignorance, it can be really upsetting, especially for the residents.”

The aggressive tactics have gone both ways. Protesters Megaphone spoke to reported incidents at both restaurants of verbal and physical abuse from customers and community members, including yelling insults, a male jogger bodychecking a female protester and pepper spraying protesters outside of Pidgin. 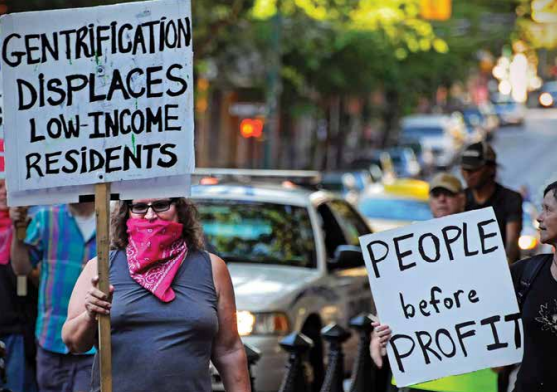 Picketers outside of Cuchillo, a Downtown Eastside restaurant. Photo by DM Gillis.

One protester reported verbal abuse from the manager of the York Rooms, the single room occupancy hotel above Cuchillo, who protesters allege is currently evicting low-income residents in favour of wealthier renters. But most complaints pertain to restaurant customers.

“The most aggressive customers are usually females,” said Beatriz Osorio, a protester whose scarf-adorned head led to a Cuchillo customer mocking her cancer diagnosis.

While speaking to Osorio and her fellow picketers outside Cuchillo on a Thursday evening in late August, passengers driving by in an SUV rolled down their windows and shouted “Get a job!” as if on cue.

Despite admitting she is sometimes frightened by customers’ aggression towards picketers, Osorio doubts police intervention would help. Hearty agrees.

“It’s just really clear that people have a sense now—and they’re kind of right—that they can do whatever they want to us,” Hearty told Megaphone.

“We certainly wouldn’t be able to do anything to them because the police are against us and they’re not interested in prosecuting anyone who assaults us, nor are we so much interested in engaging with the police that way.”

Hearty says the protester who filmed the spitting incident complained to police, but they have not heard back since the complaint was launched.

Montague confirmed the incident is being investigated as an assault: “It is open and on-going, but there have been no arrests made.”

Pickets continue outside Cuchillo and Pidgin five nights a week.