Honouring Their Spirits: Missing and murdered women live on through art 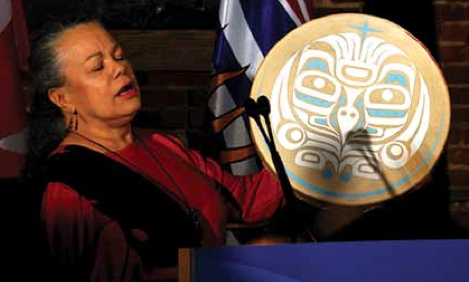 Dalannah Gail Bowen’s long greying hair is worn in a braid that falls over her left shoulder. Her delicate brown hands are folded in front of her and an understated ring—silver and opal—adorns her ring finger. She wears beaded blue earrings and a brightly coloured knit cap.

This is Bowen’s seventh year organizing the Valentine’s Day Memorial March for murdered and missing women—some of whom she once knew.

“I got involved because this isn’t limited to one community,” says Bowen. “The deeper issue is violence against women and you can be anywhere in the city—Kitsilano, the West End, North Van and there’s domestic violence and abuse that goes on.”

For Bowen, the march is about the love she has “for all the mothers, sisters and daughters out there”.  She marches because she believes the message is finally resonating, pointing to last year’s 4,000 fellow marchers and the recent inquiry into murdered and missing women.

“How do I feel when I march?” she asks gravely. “I feel joy, I feel exhilaration, I feel hope [...] But the root feeling is deep sadness because we have lost human lives and these lives happen to be life givers.”

A gifted singer and pianist, the Cherokee black woman arrived on the Vancouver music scene in 1976. Performing with an eclectic list of jazz and blues greats, Bowen toured, sang at a string of Vancouver institutions like the Commodore Ballroom and used her musical talent to raise funds for various charitable organizations.

Despite a long and modestly successful career, Bowen has still experienced her share of sadness. Always a recreational drug user, memories of a painful childhood followed Bowen throughout her career and by the mid-2000s she began using heavily.

“I hadn’t healed from my own traumatic childhood and was carrying around a lot of pain and anguish.”

She soon found herself homeless and couch surfing in the  Downtown Eastside.

“I was wrapped up in my own drug addiction and was living in places I wouldn’t wish on anybody,” says Bowen. “I  got to know some of the women who_later went missing.”

Bowen credits her turnaround to a stroke that nearly took her life in 2003. “I had been praying to get out of that life, for something to happen,” she says. “I was sick of being like that and sick of living in SROs [Single Room Occupancy hotel].”

Laughing, she refers to the stroke as a “cosmic kick in the ass”, but after reflecting for another moment calls it “a divine healing”.

After the stroke, Bowen quit using drugs cold turkey. She moved to another area and relied on  the Downtown Eastside Women’s Centre for support. She found therapy in her art—writing songs and poetry, singing and playing music. Since her stroke Bowen has founded the Downtown Eastside Centre for the Arts, published a book of poetry and released a blues album.

She received an honourary Juno and an International Women’s Day award, among other acknowledgements.

“I have always believed that art is deepened by life experience,” says Bowen, who wrote the poem “Hear Our Spirits Call” about the Women’s Memorial  March. For Bowen, the missing and murdered women of the Downtown Eastside live on through her art.

“Years ago a well-known saxophone player asked me what I wanted to do with my music and I said, ‘I want to make the words count.’”

The 20th Annual Women’s Memorial March will begin at  1 p.m. on February 14 at Main and Hastings.

This story also appeared in OpenFile-Vancouver.