join us donate
LOG IN or SIGN UP
Liquid syntax error: Error in tag 'subpage' - No such page slug join
find a vendor
July 31, 2012 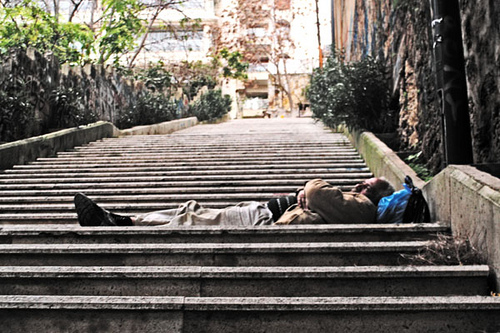 The opening of the first permanent shelter in the Tri-Cities region isn’t until 2014, but homeless people will have a new place to stay this fall when the temporary Bridge Shelter Program replaces the area’s rotating Cold/Wet Weather Mat Program.

For the last five years, the only shelter in Port Coquitlam, Coquitlam and Port Moody was a mat program that changed locations between three church basements in the region. Starting this October and operating until March 2013, homeless people can stay at in the basement of the Kingsway Campus of Northside Foursquare Church in Port Coquitlam as part of the new program.

Sandy Burpee, chair of the TriCities Homelessness Task Group, says the change is in part because the mat program was only supposed to be for two years, but also because the new program—which will provide sleeping mats for 30 people, as well as a breakfast, supper and a packed lunch—is more accessible than the temporary spaces.

“We bused clients to the [different] church locations, and that was a problem for some people who didn’t want to get on the bus because they were concerned about where it was going to take them,” he told Megaphone. “Also they were very limited to what personal possessions they could bring.

The Bridge Shelter will be a walk-in program, and they’ll be able to take their possessions with them, whether it’s with a buggy or on their back.”

Like the mat program, the Bridge Shelter Program will be funded through the federal government’s Homelessness Partnering Strategy.

The 2011 Metro Vancouver Homelessness Count found 48 homeless people in the Tri-Cities. The permanent shelter, which will be located at 3030 Gordon Ave. in Coquitlam, will include 30 transitional housing spaces.