join us donate
LOG IN or SIGN UP
Liquid syntax error: Error in tag 'subpage' - No such page slug join
find a vendor
December 19, 2011 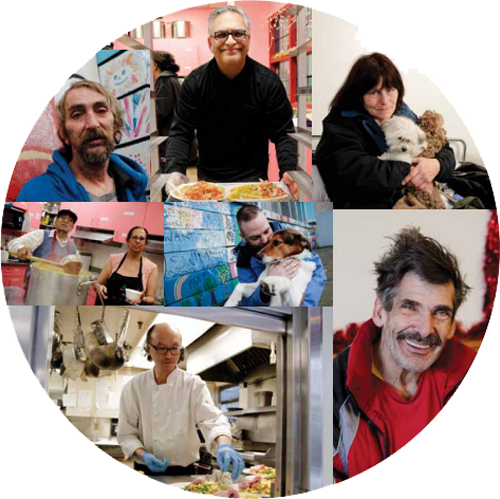 In 1971, a single room in the Patricia Hotel at Hastings and Dunlevy Streets was rented out between midnight and 8 a.m. every night. The room contained two beds, one rollaway cot and about 20 people lying wall-to-wall, using the small room as a crash pad. Volunteers offered blankets and support.

Meanwhile, 20-year-old Karen O’Shannacery roamed the streets and back alleys of the Downtown Eastside, making sure people knew that the small hotel room was available to them as a warm, safe place to sleep. Working with one other volunteer, O’Shannacery attempted to reach those in need before police officers arrived to “clean the streets”, generally meaning a night spent in the drunk tank for people found spending the night outdoors.

Between the police station and the 20 or so spots at the Patricia, there were few other places available to shelter people who had no home of their own. At the time, the oftencrowded, 15-bed Central City Mission was Vancouver’s only official homeless shelter other than the hotel room.

This one room in the Patricia was the Lookout Emergency Aid Society’s first shelter. O’Shannacery, now 60 years old and the society’s executive director, co-founded Lookout along with others dedicated to finding adequate housing for those who needed it.

“When I look at what it’s become, it’s awesome,” says O’Shannacery. It's a cold Saturday afternoon at the Lookout office and a wool sweater wraps around her petite frame. “I just did what I thought I needed to do. There’s no better job—well, it’s not a job, it’s a passion.”

After experiencing homelessness herself, O’Shannacery found a job at a youth shelter in the late 1960s. The shelter offered help to those under 21, but would often receive men in their 60s looking for a place to stay. The men were frequently turned away due to age restrictions. The situation prompted O’Shannacery to use government grant money to begin the Lookout Society, a shelter for people of all ages.

As the years passed, Lookout expanded from one hotel room to two, then a little green house, and then eventually multiple locations across Vancouver, North Vancouver and New Westminster.

“We realized that what people really needed was access to services,” says O’Shannacery, who received the 2011 Order of B.C. in October.

“Once you opened those doors for them, it began to work, like hot damn. We became convinced we could end homelessness in 10 years!” she laughs. “Obviously it was more complicated than that.

Carrying the same enterprising, compassionate spirit that opened the first hotel room 40 years ago, Lookout now continues to provide tools and resources to people struggling with homelessness. When a person passes through the doors of a shelter for the first time, he or she is given a bed, newly washed clothes, food and a consultation. A staff member informally sits down with them to discuss future goals and plans to attain them. From that point on, staffers work to find the shelter resident transitional, permanent or subsidized housing, with a focus on their specific needs.

The society offers other programs, such as a financial assistance program and community resources, but housing is Lookout’s priority.

“Housing is a universal right,” says O’Shannacery. “The difference housing makes is scary. These are people’s lives; it really is a life or death situation. You don’t live long on the streets. The worst part is turning people away. It’s so hard to say no when you know what housing does.”

Instead of the decreasing numbers coinciding with a decrease in homeless people, it’s more likely that since people stayed longer in the shelters, Lookout was unable to accept more, says O’Shannacery.

“The problem is absolutely increasing,” she says, shaking her head. “For us, it’s a balancing act. We want to keep the turnover high so we can help as many people as possible, but we also don’t want to remove people who aren’t ready yet."

The last Metro Vancouver homeless count showed a reduction in numbers because of the increase in shelter beds through the City of Vancouver’s shelters opened under its Homeless Emergency Action Team (HEAT) program. The homeless count decrease is not due to an actual reduction in the number of people who are homeless.

“The actual numbers stayed the same,” says O’Shannacery. “It’s also difficult with those counts because they only go to the notorious places, not the whole city, so they may be missing people.”

To commemorate Lookout’s 40 years of operation, staff members at Lookout locations across Metro Vancouver put up square boards in each common area asking the question, “What does Lookout mean to you?”

O’Shannacery slowly leafs through the boards covered in post-it notes with staff and resident responses. As she takes in the feedback from her 40 years of work, emotion fills her eyes. Messages range from “Thanks for all the meals,” to “Being there,” to “Saved my life.”

Each board will be framed and hung at its corresponding Lookout location.

Wendy Dalton sits in Lookout’s downtown shelter on Alexander St. Four months ago, doctors at a hospital in Surrey scrambled to find her a place to live after a conflict with Dalton’s landlord left her without a home. Unable to work, suffering from unaddressed trauma and in a wheelchair, Lookout Emergency Aid Society was one of the few places that was both wheelchair accessible and pet-friendly. Now, months later, Dalton credits the society for providing refuge during a tumultuous time.

“I had never been homeless. I was in shock,” her blue eyes widen underneath a fringe of dark hair. “Lookout gave me a better chance of getting where I wanted to go. Between my landlord, my son, my husband who won’t let me divorce him, my head was just swirling. Being here allowed me to clear my mind and take a better hold of my future.”

Staff regularly checked in with Dalton to make sure she was achieving her goals without holding her hand through the process. It forced her to take responsibility and be self-sufficient, she says.

Dalton decided to dedicate her time to becoming a peer advocate. She wants to make sure people are aware of the services available in the community. Outgoing and talkative, she finds it easy to talk to anybody, particularly new members to the community who need help finding where to go.

“The staff says, ‘You’re a woman of few words,’ while rolling their eyes,” Dalton imitates them laughing. “I can’t see someone be sad or upset and leave them alone. Sometimes all people need to know is that someone cares, just need someone to listen.”

In a few days, Dalton will move to a new apartment at Dunbar and 16th Ave., in a housing complex subsidized by Vancouver Coastal Health. Staff worked “double time and a half” to ensure that the new residence would be the right fit for her. “I’m hoping to finally be able to settle down and begin to address my trauma and deeper issues,” she says.

For now, Dalton greets people as she wheels through the Christmas-themed halls of the shelter. Green boughs follow the perimeter of the ceiling as lights, red stockings and holiday decorations cover the walls.

“We see ourselves as a family,” says O’Shannacery. “So we do a lot for Christmas. Everyone gets a gift and a service gift, a turkey dinner. It’s all based on donations so it isn’t much, but it sure helps to see their faces. Sometimes people just need to know someone cares.”

Tours to see Christmas light displays in the city are also arranged for residents, as well as school performances, a visit from Santa and prizes for the best-decorated room.

Besides holiday-themed activities, Lookout continues its extensive outreach work to raise awareness of the organization across the city. The society also helps those on the brink of eviction through rent supplements. They strive to minimize barriers such as poverty or a lack of social skills so that people can regain control of their lives.

“As long as we recognize who we are and what we’re doing, what we’re committed to, it’s really rather simple,” says O’Shannacery. “We want to help people help themselves.”

Lookout has extended its facilities to North Vancouver and New Westminster. It has also helped many North Vancouver clients find jobs through Megaphone’s vendor program.

“The North Shore has its own homeless problem which people forget,” says O’Shannacery. “The [vendor] program helps the people in the shelter make money but also educates the community as well and creates awareness.”

The society works with other community groups to expand the reaches of its work. One such initiative includes Lookout’s partnership with Building Opportunities with Businesses (BOB) and Mighty Riders to create Cycle Back, a program where clients learn bike repair skills to either busk on the street or work at a local cycle shop.

O’Shannacery wants to see more programs emerge where people are given the skills to function in the working world through what she calls contingency planning. If one person is struggling to find housing, rather than wait to solve that problem, they deal with another piece such as finding a job.

“Not one of us can do it alone,” she says. “We need to draw from our community resources and work together. I want to create opportunities through social enterprise. That’s what I’d like to see more of in the coming years.”