join us donate
LOG IN or SIGN UP
Liquid syntax error: Error in tag 'subpage' - No such page slug join
find a vendor
February 26, 2013 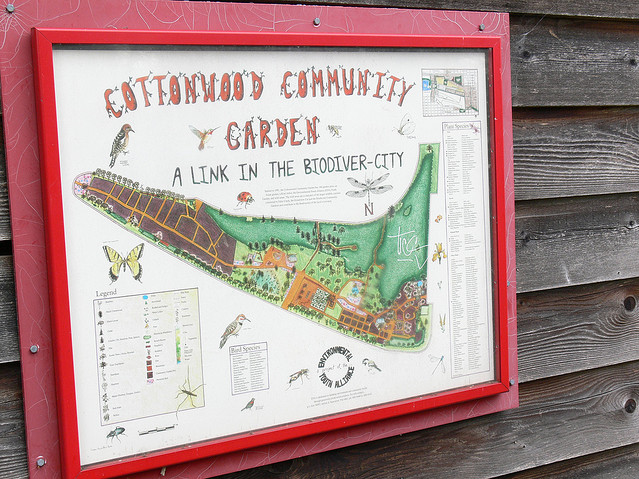 City hall is taking steps towards removing the Georgia and Dunsmuir viaducts, leaving high-cost housing and new traffic problems in their place. The city claims that these new traffic problems can be solved by expanding one of the streets into the historic neighbourhood of Strathcona. The three sites that are under threat of displacement are the Cottonwood and Strathcona community gardens, two of the oldest and largest in community gardens in town as well as the newer Purple Thistle Food Forest at Vernon and Charles Streets.

The bulk of Cottonwood Garden’s three acres is spread along the length of Malkin Street. In the expansion plans, Malkin would widen to six lanes, not including the bike lanes and dividers which gardeners estimate would reach up to eight lanes of space. According to city plans, this would destroy the majority of the garden. If the remaining space is spared by redevelopment, gardeners are concerned that this final sliver would be flooded with noise and air pollution. Currently, these gardens provide some of the city’s most peaceful green space and essential food sources for many Downtown Eastside residents.

Cottonwood was squatted and built in 1991 on the abandoned remains of a highway system that once proposed to displace scores of residents from their homes, plans that were scrapped only after militant opposition from Strathcona residents in the 1960s and 70s. The only major component of the highway eventually built is the very viaduct system now slated for removal.

At the time of construction this section of the viaduct displaced the historic Black community of Hogan’s Alley. By the time gardeners took back the land, it had become a waste-dump where the city had stopped enforcing its antidumping bylaws.

Across the train tracks from the Cottonwood Garden is the The Purple Thistle Community Food Forest, a youth-run initiative that puts food and common green space in the heart of the working class neighborhood’s industrial area. The project runs the gamut from polluted land remediation, bee-keeping and experimenting with a diversity of permaculture practices—all by and for youth.

Food Security for Low-Income residents of the Downtown Eastside

With the $610 per month for an ‘expected-to-work’ adult’s social assistance payment, that leaves little for food after shelter, transit, clothes and a phone for finding work. This leaves a maximum $26 per week that the government says should be left for food after these minimum expenses. That is less than half the conservative amount deemed necessary by the Dietitians of Canada in order for an adult to sustain a basic healthful diet.

Many people spend vast portions of their time in lines to get food to survive. It is often the case that meals acquired this way consist of the least nutritious foods around, resulting in people losing more and more of a say over what they feed themselves and their families. B.C. welfare offices take money off peoples’ cheques when they get paid work to meet their basic food needs. The dollar value of carrots people grow, however, is not deducted by the welfare office.

Democratic, grassroots community gardens function to enfranchise their members, unlike many of the charitymodel food sources that so many people on social assistance depend on.

No community gardens on public or private land have secure tenure or right to the land. As long-time Cottonwood gardener Len Kydd explains, “We have a license to garden. It’s about akin to a ball league having a right to use a ball field.”

UBC Geography PhD candidate, Noah Quastel, has described this process as part of a general eco-gentrification problem in Vancouver. He sees a merger in Vancouver between the problem of gentrification, on the one hand, and the problem of “the language of sustainability stripped of its social justice concerns,” on the other. “The result is projects that promote high-rise development in the centre of the city without due concern for issues of social housing and community input.”

The municipal public land would be sold for private housing developments, with 1,000 units on two blocks alone. Twenty percent of the units might—although without guarantees—be reserved for “affordable” housing, as defined by affordability at incomes ranging from $20,000 to $90,000. This is a far cry from affordability for the quarter of Vancouver’s population living in poverty and has been described by the Carnegie Community Action Project (CCAP) as a missed opportunity to build some of the city’s direly needed social housing.

Green for All or Green for Some?

Amidst discussions among community gardeners about how they could organize to defend these historic community assets, there is a growing conversation about the politics behind city hall’s potential willingness to sacrifice the garden. Vision Vancouver, which dominates city hall, revered Cottonwood in its previous election campaign literature. The entire viaduct removal is in fact listed as part of city hall’s branding initiative to make Vancouver the Greenest City in the world by 2020.

The same policy strategy even lists the expansion of community gardens as a priority. Many gardeners at Cottonwood had voted for Vision on the basis of the party’s green mandate. Yet in their many letters to city hall, they overwhelmingly articulated feelings of betrayal.

“But I think it comes down to money, to development, and what the City can get out of it.”

Peter Driftmier is a Cottonwood gardener and a food justice community organizer in the Downtown Eastside.

A version of this article first appeared in The Mainlander.