join us donate
LOG IN or SIGN UP
Liquid syntax error: Error in tag 'subpage' - No such page slug join
find a vendor
April 25, 2013 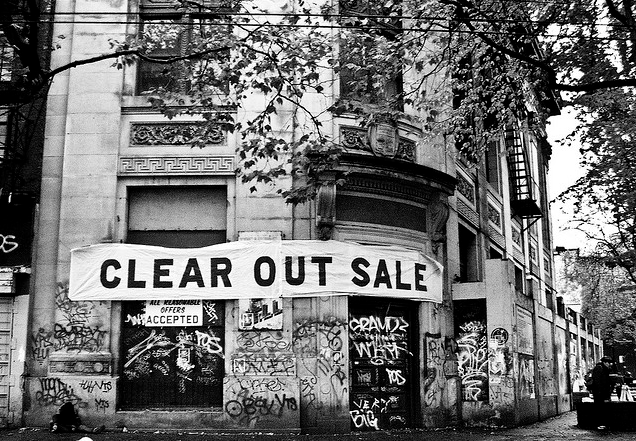 As a resident of the Downtown Eastside (DTES) whose perspective is the product of decades, I witnessed the gradual, inexorable juggernaut of gentrification take place all around me.

As a “garden variety, left wing, socialist leaning humanist” (yes, a “flake”), I assure you that the window to wage war on gentrification slammed shut years ago. Having lived in some of the foul smelling “heritage dwellings” so far sacrificed to gentrification, I am suspicious of the vicarious nostalgia claimed as motivation by those who have not. By whatever name, urban renewal isn’t new.

Historic precedents abound: in the ’60s, San Francisco’s Haight-Ashbury was an impoverished slum in the making. Then “it” happened—a targeted transformation from vermin-infested, crime-ridden ghetto into the boutique- and bistro-ridden landmark it still is. The die was cast. The trend spread far and wide as it rolled eastward to New York, and eventually north to Toronto.

How do you reach those who seek to perpetuate vile tenement slums? Maybe a “weekend getaway for one”, spent hungry and penniless in a seventh floor, elevator-less, “penthouse suite” in the Colonial Hotel’s scenic Gastown location could provide a context based in reality for these self styled guardians of the DTES’ status quo. Meanwhile, the slumlord property owners go, as ever, whistling through the graveyard, busting a collective gut at the irony in cheering on what should be a snarling pack of their natural enemies. Anonymity intact. All the crooked little fingers pointing elsewhere.

Oddly, I’ve never laid eyes on any of those who descend upon the DTES each evening, promising to bankrupt the Pidgin Restaurant. I interviewed folks who hang in the park across the street, asking if any were familiar with the nightly cavalcade of protesters.

No luck there either; though one familiar Pigeon Park denizen wryly offered the possibility that they may be tourists, “from one of the cruises ships.” Deadpan humor, so subtly rich in social innuendo, that if grasped at all by those it defined, it would be ill received at best.

But hey, maybe these caped crusaders are just lost. It happens. Or is it possible our heavily policed transit system is being subverted by weekend warrior activists who are sneaking into the DTES? Diabolical! But outside agitators filtering into hot zones, stirring up shit, then skulking off via pumpkin coach rapid transit is nothing new. Even once remote Abbotsford is merely one-and-a-half missed sitcoms away.

Who else, other than such as these, could thoughtlessly seek to wreak havoc for havoc’s sake without even the pretense of a positive solution as their goal? So hopelessly disconnected from the psyche of the street folk they claim to represent that they can’t grasp how their choice of a target is the sole cause of the total non-materialization of grassroots support for their charade. Hint: Next time, choose a target that doesn’t reveal you to the world at large as a bully who targets smaller, more vulnerable victims. It’s no secret that even without placard waving protesters, new restaurants top the list of ventures most vulnerable to bankruptcy.

There are solutions, all of them complex and expensive, requiring three levels of government, and big business to effect. How to motivate these reluctant agents? Protest! But protest used as a lever, not as a baseball bat. The figurative fulcrum to this lever? Fiscal self-interest, achieved by squeezing them just as they’ve always squeezed us: where they live. Follow the money.

Empty storefront windows and bankruptcy aren’t the goal of any resident of the DTES I have spoken to. Protest? Oh yeah, but positive, goal- oriented protest. Follow the money.

John MacInnis is a longtime resident of the Downtown Eastside.