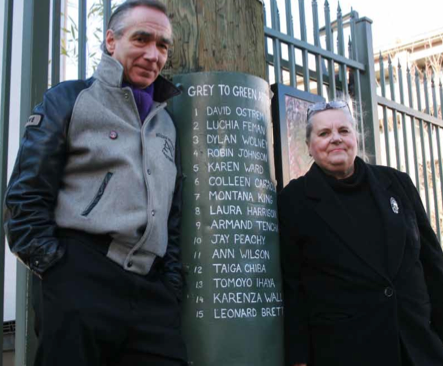 The fence around the parking lot at 150 East Cordova Street consists of hard metal vertical rods, each filed sharply at the top to discourage fence-jumpers. It can be a lonely corner of the city, but if you find yourself walking near Cordova and Main these days, hits of colour line the fence, providing welcome relief from the grey surroundings. Step closer, and you’ll see the work of 15 local artists. The paintings, photographs and mixed-media artwork on display were produced under the theme “Living Here”, and explore the artists’ experiences and memories of the neighbourhood.

The art was installed two months ago and administered by Intersections Media, a Downtown Eastside media production society that runs filmmaking workshops for youth who face barriers to employment. The art fence was planned in tandem with a mural painted on the back of 319 Main Street. The City of Vancouver helped fund both projects through RESTART (Restorative Juice Through Art) for the mural, and the Vancouver Great Beginnings Program for the fence.

“One of Intersections’ mandates is to create public art projects as a means of teaching fundamental life skills to at-risk youth,” says Douglas Holliston of Intersections Media. “The art fence and mural projects were therefore a great opportunity to help Intersections achieve its goal of breaking down barriers through art and communication. We strongly support urban spaces that interact with residents, rather than just ignoring them.”

The Intersections art fence is a work in progress, Holliston continues. The ultimate goal is to showcase a rotating selection of artwork on the fence.

Megaphone spoke with three artists who contributed to the Intersections Fence Project. While diverse in media and content, the pieces find a common thread in their abiding, often bittersweet affection for an eclectic, changing neighbourhood.

Luchia Feman has lived in her apartment at Carrall and Cordova for about five years, but her presence in the neighbourhood has spanned a lifetime. “I have been coming to Gastown since I was a year old. My grandmother worked at the Bank of Montreal at Hastings and Main. She would bring me here every weekend,” she says. “My first job was at the police station at Main and Hastings when I was 17, working shift work.”

The little girl in “The Moon Hums Lullabies,” Feman’s Intersections Fence Project contribution, has appeared many times in her work. “Moon” explores some of Feman’s Gastown sentiments.

“It’s a child alone at night in a quasi-dangerous area, and you know it’s still going to be okay,” she explains. “That’s my sense of this neighbourhood.”

Feman used encaustic, a wax material, on “Moon.” “I was wondering how it was going to weather, but if it degrades, so much the better,” she says. “That’s Gastown.”

Rising tension between new and longtime residents has changed the feel of Gastown in recent years, Feman says. “The one thing I’ve always loved about [Gastown] is that this is one of the few places in the world that you’re going to find everybody. I’ve always had a sense that everyone’s welcome,” she says. “But in recent years, it’s almost like there’s a sense that no one’s welcome here anymore.” 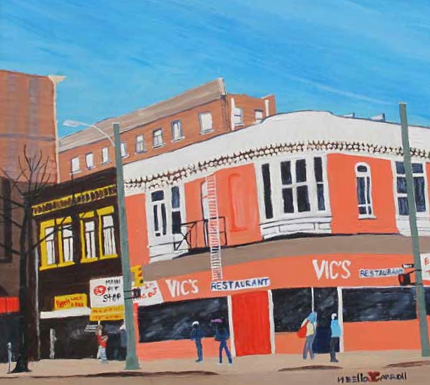 Colleen Carroll moved to the Downtown Eastside from northern B.C. after health complications left her in search of a new home. She followed her grown sons into Vancouver, and sought out an apartment using rental rates from previous homes as a benchmark for city living.

“When I lived up north, it cost me $350 a month to live in my home. I found this [Vancouver] place for $350 a month rent over nine years ago,” she says. The apartment, where she still lives today, is located above Owl Drugs at Main and Hastings.

“When I told my kids I got a place to live and where it was, did the shit ever hit the fan. ‘Oh, Mom, what have you done!’” she says, laughing. But Carroll’s health improved with the help of a reliable doctor, and Carroll is now fully settled into her new life in the city. “I’m down here, I love it, I’ve made community here. I get to see my kids more often.”

Carroll’s Intersections Fence Project contribution is a photograph of Vic’s Restaurant at Main and Pender. The space is now occupied by a coffee shop, but Carroll, a passionate supporter of community businesses, considers the image a reminder of affordable local dining establishments that are becoming increasingly rare.

“They are really unsung heroes in a community, these small merchants,” she says. Carroll supports businesses like the local Sunrise Market over nearby big-box chains as an effort to keep the Downtown Eastside economy sustainable and affordable. “Because we’ve preserved the community, we’re still affordable for people to live.” 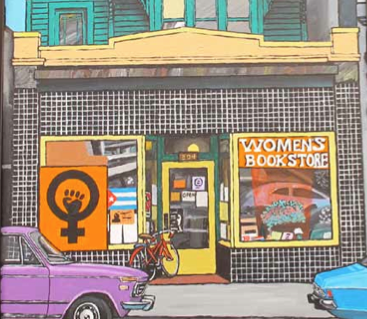 “The demographics were a bit different,” he says, describing what was called “Skid Row” in the 1970s. “It was a community of seasonal workers, mainly loggers and fishermen, who would work a few months, and they’d have a few months off with tons of money. They’d get a cheap hotel room and party it up.”

In those days, the neighbourhood wasn’t as dangerous for a cab driver as it is now, Ostrem says, but life was tough for residents. “There’s plenty of tragedy down here, plenty of ruined lives, systemic poverty.”

On one of his late-night taxi shifts in 1975, Ostrem picked up a man and a woman in the Downtown Eastside. The woman, he said, was a sex trade worker who looked distressed. She hastily scribbled a note to Ostrem on a torn piece of a matchbook. The note read “Please come get me at ___.” The last half of the note was illegible, and Ostrem felt terrible for not knowing where to find her.

“In 1975, calling the cops to save a hooker from a pimp was not an option,” he wrote in his artist statement for “Vancouver 1975 Rescue Note,” which appears on the Intersections art fence alongside a painting of a Downtown Eastside feminist book store from the same era.

Exhibiting the rescue note next to the feminist bookstore painting is an intentional juxtaposition of female struggle, Ostrem says. “I always admire anybody who sticks their neck out,” he says. “Not everybody is a male, Caucasian English- speaking person like myself.”