Save the Shelters: The provincial and municipal governments must keep the New Fountain shelter from closing 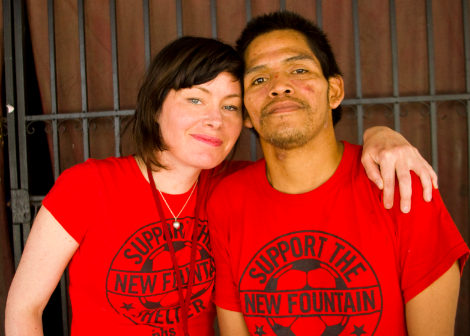 Unless the provincial and municipal governments come up with new funding, the Downtown Eastside’s New Fountain Shelter will close at the end of the month. This would be a tremendous mistake. If Mayor Gregor Robertson and Premier Christy Clark are serious about ending homelessness, they must keep the New Fountain open, and reopen the other four emergency shelters that recently closed.

The New Fountain is one of the mayor’s Homelessness Emergency Action Team (HEAT) low-barrier shelters, which are funded by the city, the province and the Streetohome Foundation, and were part of his strategy to end street homelessness by 2015.

Inspired by the death of a homeless woman named Tracey, who died after refusing to go into shelters because of their restrictions and accidently set herself on fire trying to stay warm, the HEAT shelters often operate 24 hours a day, allow people to bring in their shopping carts and pets, and let people come and go as they please.

They've been an incredible success. Along with often being at full capacity since they opened in 2008, the number of people sleeping on Vancouver’s streets has fallen from 815 in 2008 to 145 in 2011, according to the most recent Metro Vancouver homeless count.

But in April the province shut down four of the HEAT shelters and only extended funding to the New Fountain for two extra months. The province reasoned the shelters are too expensive to keep operating, and that with new social housing having recently opened, there’s no longer any need for the shelters.

Unfortunately, that decision will both increase the city’s homeless numbers and the costs in managing them. While shelters are more expensive than social housing, they are cheaper than having people out on the street. According to the province, the cost of one bed at the New Fountain Shelter is $2,250 a month ($27,000 a year). But according to research by SFU academics, a homeless person costs the provincial government $55,000 a year. So these shelters are a good deal in comparison.

And while housing is always preferable to shelters, we are still waiting for enough social housing to accommodate the city’s homeless numbers. Although street homelessness may have decreased, the overall number of homeless people in Vancouver (including those in shelters) increased from 1,580 in 2008 to 1,605 in 2011. Closing the New Fountain at the end of this month will only exacerbate that problem.

In order to save money and keep people off the streets, both the province and the city need to keep the New Fountain open and then reopen the other HEAT shelters. If we are going to end homelessness in Vancouver, these shelters need to be part of the solution.