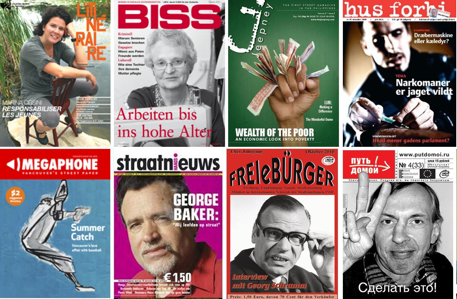 A global network of papers and magazines aimed at lifting homeless people out of poverty is bucking the overall slump in worldwide print sales, with a collective 10 per cent rise in circulation over the past year.

Titles within the International Network of Street Papers (INSP), in September this year had combined sales of 1.51 million, compared to 1.37m a year earlier. Readership of the 115 titles within the group, spread across 40 countries, has now hit 5.27 million against 4.79m a year ago.

The best results were recorded in North America (+36 per cent) and Europe (+6.4 per cent). During the year to September, ten new titles were launched; street papers are now read in 24 languages; and weekly bulletins highlighting their content are now sent to 1,200 media outlets, NGOs and government bodies around the world.

“Any increases in paid-for circulation - and certainly on this scale - are counter to current trends in the magazine market, across nearly all mature economies,” he said. “The reach of these titles is impressive, and their market share is growing even more disproportionately.”

INSP has strong global industry links, which include Reuters, and the Rome-based

David Schlesinger, editor-in-chief of Reuters News, and INSP’s Honorary President, added: “Compelling and engaging content, presented well, deserves to be a winning formula. When that is combined with a special cause and enterprise, it truly makes a mark.”

The concept behind the INSP street paper movement is a simple one. Homeless vendors buy a paper at cost price and sell it for the cover price, keeping the proceeds. The growing sales translate simply into more people being taken off the streets.

A report from the World Association of Newspapers and News Publishers, published in August, revealed data from 233 countries that publish newspapers. Their ‘World Press Trends’ report showed there was a 0.8 per cent decline in newspaper circulation from 2008 to 2009, to 517m copies sold. Sales in developed markets such as Europe and North America were hit the hardest.

news industry success story. It is showing in a tough market, that targeted, local papers and publications are still strong."