join us donate
LOG IN or SIGN UP
Liquid syntax error: Error in tag 'subpage' - No such page slug join
find a vendor
November 08, 2011

The Occupy Vancouver camp may end, but the message needs to stay alive 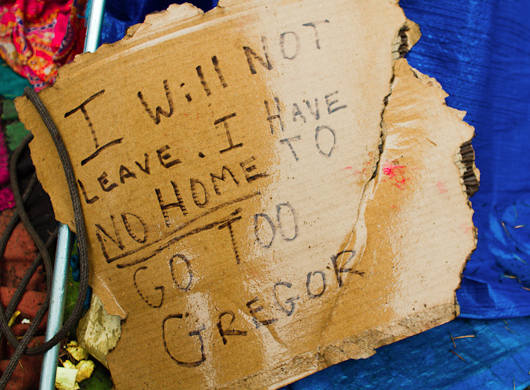 A sign at the Occupy protest at the Vancouver Art Gallery. Photo by Ken Wu.

Protestors were handed a formal request on Monday to disassemble the makeshift tent city that has transformed the Vancouver Art Gallery for the past three weeks. And the city is likely going to ask for a court injunction to legally dissolve the encampment.

Many consider the community an eyesore and the city claims it poses various health and safety risks. And when Ashlie Gough died over the weekend of an alleged overdose, the first fatality but the second reported overdose, the city said enough is enough.

Whether the city comes down peacefully or not (please, let it be peaceful), it’s clear that the tarped-up tent city will be over, at least in its current form. But what will still remain is a community of homeless people who have very publicly reminded Vancouver that there are many who have nowhere to live in one of the world’s most livable cities.

There were 125 overdose deaths in Vancouver last year that hardly caused a stir. If anything, at least the Occupy Vancouver movement is forcing people to see how people live, and can die, when they are at their most vulnerable and have nowhere to go.

When the tent city comes down, many who have stuck it out in the increasingly cold weather won’t have a warm and cozy bed awaiting them. They will again erect their tents, but this time in more dangerous and darker hidden nooks of the city, once again out of the public eye.

Last night, the two front-running mayoral candidates debated (or tried to debate over heckling and booing) homelessness and affordable housing issues to a crowd of over 1,000 people, many of them Occupy protesters. Both candidates promise they can eliminate homelessness by 2015—ambitious but necessary goals. Let’s hope that whomever wins the coming election remains on task to grant the city’s (and the country’s) poorest citizens the comfort, dignity and safety that everyone deserves.

The Occupy Wall Street movement began by addressing global issues but it has become localized, morphing into micro-protests that are custom-made city to city. The protests worldwide are united by the fact that inequality and greed creates unfair and unjust situations for so many, let’s hope that this new conversation will spark real change.