join us donate
LOG IN or SIGN UP
Liquid syntax error: Error in tag 'subpage' - No such page slug join
find a vendor
April 07, 2011 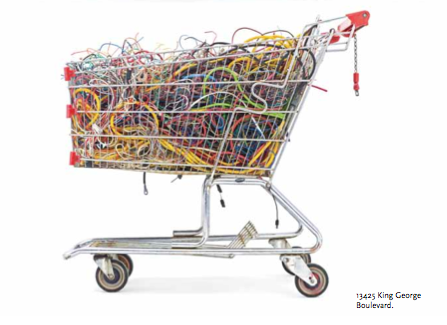 Every day they line up, beginning in the earliest morning hours before the doors even open. The line snakes its way down the street, and those in it appear anxious. They are ready to get in and get out as quickly as possible, in order to get back to work and back into this line again.

This is the daily routine outside of the United We Can bottle depot on East Hastings Street. Those in line are the binners that work their way through our city every day, traipsing across town and tracing their way through the city’s complicated tertiary commuting paths comprising laneways, alleys, back roads and residential streets.

It’s a study in social commerce. It’s a capitalist model, an environmental model, an employment model. The binners collect the unwanted bottles and cans marked for trash, exchanging them for money at the recycling depots that dot the city. Most often, they are seen pushing their overflowing shopping carts with these bottles and cans.

It’s this underground world of commerce that is the subject of Brian Howell’s newest series, “Shopping Carts”, opening at Winsor Gallery on April 7. 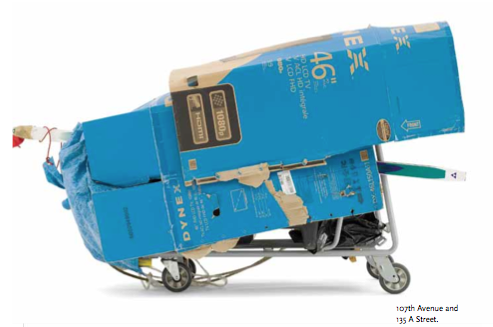 Brian Howell is a Delta, B.C.-based photographer and artist who has exhibited both nationally and internationally, regularly contributing to publications such as to Geist, Maclean’s and Vancouver magazine. His artistic work tends towards society’s margins, like “One Ring Circus”, a documentation of a local professional wrestling circuit, and “Fame Us”, which chronicled celebrity impersonators.

Despite his chosen subjects, Howell treats their obsessions sincerely and with integrity. Their motivations may be mysterious to the casual observer, but for Howell, there is a world to mine. Like his other series, “Shopping Carts” blends his photojournalistic background with his artistic sensibilities.

In “Shopping Carts”, the otherwise mundane, quotidian objects are considered by Howell as art objects. The series comprises 25 large-scale photographs of shopping carts that were purchased firsthand from their owners in Vancouver and around the Lower Mainland. I imagine the binners he stopped were fairly quick to agree to his proposal. After all, most of these carts are not filled with personal belongings, but with objects meant to traded and sold.

The photographs themselves are stunning, bursting with colour against the stark white background he shoots them against. He geographically locates each photograph, showing that the carts are not isolated to certain neighbourhoods or communities. It’s part of the process of separating the shopping cart culture from homelessness: those that use them to carry goods from those that use them to carry all their personal possessions.

It’s strange, though, to see the carts portrayed in this way, all motionless and silent. Usually we hear them before we see them, a rattling racket through laneways that announce their presence before appearing.

Even in these circumstances they are slightly surprising to see, taken out of their natural environment of brightly fluorescent-lit shopping malls and grocery stores. Howell takes the removal and incongruity one step further, though—out of the stores, out of the laneways and onto the walls of a gallery. 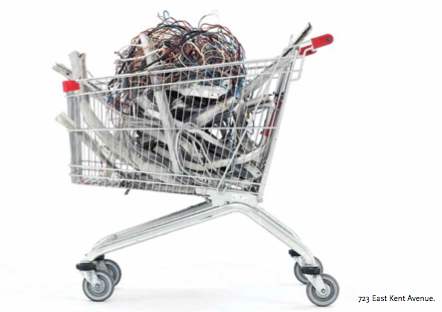 At first blush, shopping carts would seem to be a strange subject for a gallery series. But Howell reveals the layers of meaning behind these simple four-wheeled carts. As he displays them, they are beyond merely functional, packed not only with goods, but with significance. Howell shows us a deeper side of these objects, exploring themes of homelessness, consumerism, commerce, class and environmentalism.

The carts themselves are a study in contrasts. Some are modern and sleek, with slim lines, painted black and built for speed; others boxy and utilitarian, designed for little beyond carrying as much as possible—these are the pack mules of the shopping cart breed, and one can almost see the wheels uncontrollably wobbling off in the wrong direction. Some carts are draped in clothes and fabrics, while others are filled with cables and wires; all are overflowing with cultural detritus that would be considered by many on first glance to be little more than an accumulation of junk.

As Doulas Coupland asks in his introductory essay on the series: “People often say that they’re throwing something away, but this statement begs one of the great questions of consumerism: ‘When you throw something away, what, exactly, do you mean by away?’”