There's a food revolution in the Downtown Eastside: How to retool free-food programs for nutrition and sustainability 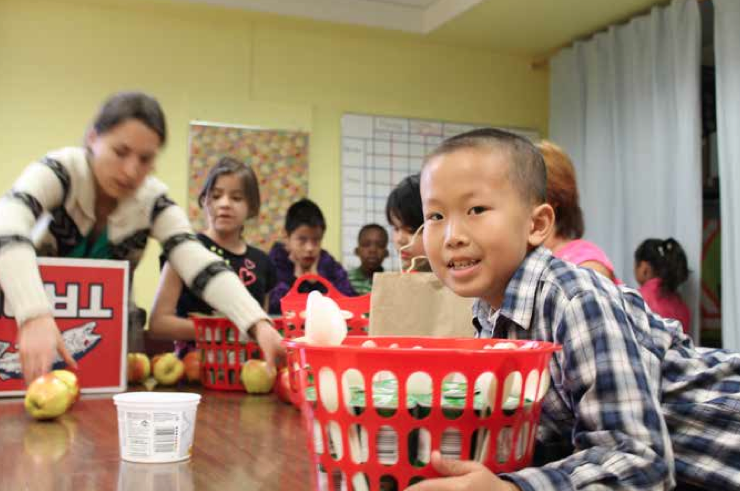 One morning a week, Miss Triviano’s Grade 3 class files into the staff room of Lord Strathcona Elementary to wash apples, break apart yogurt cups, and organize the food in baskets to deliver to primary classes. There’s enough food to make 50 snacks for students, perhaps even some members of this class.

The snack program is part of a new collaboration between the Potluck Café Society, Strathcona Community Centre, and the school to ensure students have access to healthy food. Many Lord Strathcona families can’t afford to send their children to school with enough food to see them through the day.

“It was a way to reach kids that need a snack without having to create stigma around it,” says Lauren Brown, food security coordinator at the community centre.

PwC Canada, a business services company, funds Lord Strathcona’s snack program. The food is bought through the Potluck Café Society’s new food procurement program, which purchases bulk food from local retailers and, through a coordinated effort of food procurement, provision, and programming, is working to change the face of free-meal programs in the Downtown Eastside.

“By accessing better pricing for the food that they’re already buying, [free food providers] are able to have a little more money—some room in their budget to reinvest into their food programming and the stuff they can’t normally purchase,” says Doris Chow, project manager of Potluck’s Downtown Eastside Kitchen Tables project of its new food procurement program.

“If [providers] save money on the dessert that day, instead of pocketing that money for other purposes, they buy sunflower seeds to put in the salad as added nutritional value.”

The snack program at Lord Strathcona is just one example of Potluck’s far-reaching efforts to improve the quality of free food available to marginalized inner city residents.

The inception of the Downtown Eastside Kitchen Tables grew out of concern about the quality of Downtown Eastside food offerings, especially the day-old pastries and starchy, sugary foods prevalent in many food lineups and free lunch programs.

One free food provider in the neighbourhood even saw the diagnoses of Type 2 diabetes rise among its seniors population. Kitchen Tables chose not to disclose its name to Megaphone, but the direct link between diabetes and over-consumption of sugars and starches strengthened the Kitchen Tables Project’s conviction that simply providing free food to vulnerable populations is not enough. Quality matters.

Most of the food procured through the program so far consists of fresh produce and dairy. “There’s a lot of potatoes being bought, there’s a lot of onions, a lot of carrots,” says Chow.

But, she adds, “Every organization [in the neighbourhood] is buying them separately.” Chow is currently working towards a more coordinated purchasing effort in the community to save free food providers money and ensure the food they’re buying is healthy and good quality. In the future, she would like to purchase food directly from B.C. farmers. 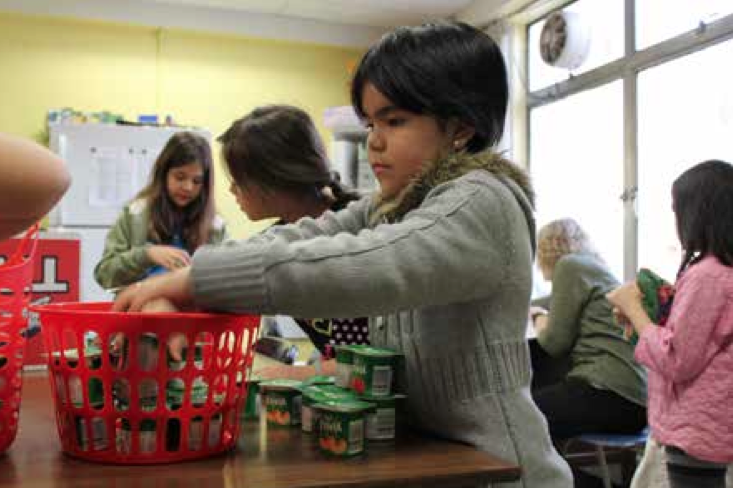 While the Downtown Eastside Kitchen Tables Project is aimed at improving the year-round quality of food available to inner-city residents (it even produces a food map showing residents where and when they can access free and low-cost meals), one seasonal fruit procurement effort has been in the works for over a decade.

The Vancouver Fruit Tree Society has been picking summer fruit from the backyards of Vancouver residents (with permission) for the past 15 years. The backyard fruit yields 3,500 to 5,500 pounds of local, pesticide-free apples, cherries, plums, and even sometimes kiwis. The fruit is donated to organizations like the Strathcona Community Centre, the Downtown Eastside Women’s Centre (DEWC), and the Enhanced Living Society at the Portland Hotel.

“We are diverting thousands of pounds of fruit that would have otherwise gone to the city landfill and just rotted,” says Lin Gardiner, president of Vancouver Fruit Tree’s board of directors, and they deliver fruit all over the city.

This year, thanks to a grant from the City of Vancouver, the Vancouver Fruit Tree Society is producing a map of fruit trees available in public spaces to pick next season.

“It’s just amazing to see boxes and boxes of apples that are going to a community kitchen where they can then incorporate it in their food programs,” Gardiner says.

The DEWC is one of the few organizations in the community with a program catering specifically to low-income Chinese-speaking residents.

Every Thursday, Chinese senior outreach worker Anita Lau coordinates a community kitchen program for elderly Chinese women. Lau estimates they serve about 60 women per month, in addition to the average of 60 Chinese-speaking women accessing DEWC’s daily free lunch. But Lau believes that’s only a fraction of the Chinese seniors living in the DTES, and community workers are looking to expand food access and literacy among Chinese speakers in the area.

Organizations like the Hua Foundation are in the development stages of creating a food literacy and procurement program in Chinatown that would benefit the senior residents there.

Meanwhile, many Chinese-speaking seniors are making do with free meals through Salvation Army, United Gospel Mission, First United Church, and Mission Possible—organizations notable for their snaking meal lineups that sometimes span several city blocks. All organizations are reporting racism and harassment directed towards Chinese seniors by others in line.

“Often I think it’s just a misunderstanding of the culture or it could also be a language barrier and people are not happy they don’t speak English,” said Lau.

Kitchen Tables’ Chow, who has also met with these organizations, says it’s important for everyone, her organization included, to have Cantonese-speaking volunteers to help break down barriers to food for these seniors.

Recently, Kitchen Tables began making its food map available in Cantonese. And during its Chinese New Year dinner in February, it hired three Chinese seniors from the DEWC to serve the meal at Potluck. “It went fantastic,” says Chow. “They were able to communicate with the other Chinese seniors who were coming through the lineup and we had zero conflicts that day. And the seniors were ecstatic to be getting paid for something because of the language barrier. It’s even more difficult to find them job opportunities.”

The beauty in a moment of levity at a Chinese New Year meal, a ready snack in elementary school, or a freshly picked apple from a local backyard may seem fleeting. But they are significant, cumulative markers in a powerful, community-wide shift in how food is procured, prepared, and served to people who need it the most.