join us donate
LOG IN or SIGN UP
Liquid syntax error: Error in tag 'subpage' - No such page slug join
find a vendor
October 04, 2013

Top 10 List: How NOT to respond to Indigenous experiences of racism in Canada 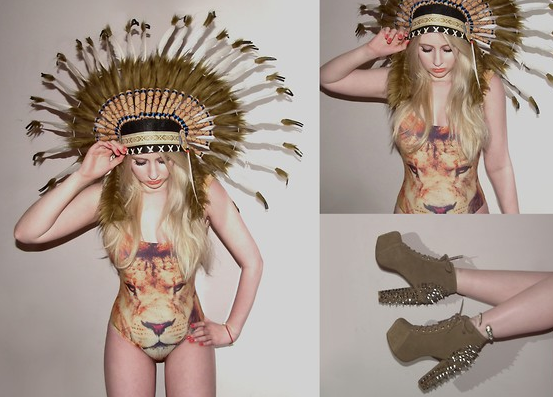 Last month, Ian Campeau of the band A Tribe Called Red made headlines when he argued that the Nepean Redskins, a youth football league in Ottawa, should change their name because “redskin” is a slur used against First Nations people. Predictably, non-Native people flocked to the internet comment threads to voice their objections to his opinion. Michelle Reid provides a summary of these knee-jerk responses that are always trotted out by the masses when indigenous Canadians describe their experiences of racism, and why you should not use them:

1. Don’t bring up your own experiences of discrimination.

My favourite comment on the Nepean Redskins name debate comes from a man who proclaims that “my ancestors came right off the boat to Canada from Scotland however, they were badly discriminated against for many years [sic],” and then goes on to suggest that it’s really the Indigenous people who are racist. Classy!

Listen, we all know that everyone’s ancestors were invaded by the British and so you too can lay claim to historic oppression! And everyone has at one point or another been insulted for some intrinsic quality, and it made them feel bad. But someone calling you an “evil ginger” on the playground is not the same as living in a society that tramples your human rights and dignity. And even if you think your experience is equally bad—or even worse!—the fact is that this particular conversation is not about you. You know that person who interrupts someone else’s story to say, “Oh man, I have an even WORSE story about flying with Air Canada”? Everyone hates that person. Don’t be that person.

2. Don’t claim you have more important things to worry about than racism.

Someone is always eager to point out that there are “real things to worry about,” like radiation or Syria or child poverty. This is a really cool way to say, “I don’t care about you or your experience, but I’ll mask my indifference by pretending I am fully preoccupied by a more important cause.” Did you know it’s possible for different awful things to be happening, and that there is not a finite amount of consideration for the awfulness of the world? That you caring about Syria does not preclude you acknowledging that racism is a damaging force in the lives of many, and that other people might want to pay attention to that too? It’s true!

3. Don’t argue that some racism is worse than other racism.

Recently, AnOther Magazine put actress Michelle Williams on their cover, done up in dark makeup, feathers and braids. The cover was flagged and criticized for the depiction of Williams in “redface,” but many felt that even if the cover was tasteless, redface was a grey area that wasn’t as bad as, say, blackface. Even though it was pointed out by many that redface and blackface are both racist, detractors insisted that this wasn’t bad enough to complain about. Let’s just agree that all racism is bad, and should be avoided whenever possible.

4. Don’t act like not being racist is a burden on you in particular.

The discussions of headdresses at music festivals have illustrated an interesting phenomenon: people don’t want to seem racist, but they also don’t want to modify their behaviour at all.

As Adrienne K from Native Appropriations has pointed out in detail, there are lots of good reasons why you shouldn’t wear a headdress as a fashion statement. And yet many people act like it’s a huge, unreasonable demand to ask them to shelf their Forever 21 headdress and wear something else to Coachella. But they fail to see that they have a choice: shelving their faux-Indigenous accessories or being easily identified as a lazy racist. That’s a privilege, not a burden! You know who doesn’t have a choice? Indigenous people, who have to see white teenagers trampling all over their identities and culture in pursuit of an awful trend.

5. Don’t try and trap them in a racism logic puzzle.

Using inane thought experiments (“But what about the fact that Roman senators basically killed Christ and also threw Christians to lions, and the Ottawa Senators mascot is a lion?”) to try and justify racism makes you sound not only like a racist but also like a C-minus philosophy undergraduate.

Did you text your one Native pal to see if he thought this incident was offensive and he texted back “dunno i guess not, what r u up 2 this wknd” and you have decided that opinion represents the other 1.4 million Indigenous people in Canada? In science we call that a “convenience sample” and it’s cheerfully dismissed. That is, assuming we even believe you have this fictional convenient example friend.

7. Don’t use ignorance as a shield.

“I don’t get why this is racist!” you say, as if your similar ignorance about other topics—astrophysics, post-modern literature—are grounds to refute their existence or validity. It might be possible that as a person who does not belong to the cultural or ethnic group in question, you have never noticed certain incidents of racism or the erasure of identity because they just didn’t apply to you. Your reality is not everyone’s reality. Your reality is not necessarily the best or the most correct. If your reality involves dismissing or ignoring the suffering and dehumanization of others, well, it’s definitely not the best or most correct.

8. Don’t use history as a scapegoat or an excuse.

Yes, we know the past was racist. Extraracist! But that was a long time ago, right? Well, no, it’s a pretty unbroken continuum of racism. But don’t pretend that just because the past was arguably worse, everything is fine now. Let’s dare to strive for a higher standard than “not as bad as smallpox blankets.”

9. Don’t refuse to acknowledge that you might be living in a racist society.

Everyone would prefer to think of themselves as not-racist. “I’m not racist,” everyone insists, before detailing their racist position. But generally, insisting that you are not racist while trying to defend ideas that others have identified as racist is a losing battle.

The fact is, Canada was founded on racism; it was so racist it was actually a role model to other racist regimes. It’s likely that growing up here has resulted in internalizing some racist beliefs. It happens! If you’re called out for them, don’t trip over yourself to explain how you cannot possibly be racist because in your heart you know your intent was pure. Ask yourself: is it possible that living in a country that treats First Nations like a plague to be eradicated may be why you are so ready to dismiss their voices and claims, to assume that they are exaggerating or flat-out lying about their experiences? Is it possible that you might be wrong?

10. If you realize you’re wrong, don’t refuse to apologize.

Apologies are the mythical beasts of social interactions, especially when they are real apologies and not blameshifting versions of “I’m sorry if you misunderstood what I was trying to say with this headdress.” But we have a role model now: Paul Frank, designer (not to be confused with Frank Paul, an Indigenous man left to die by callous police officers!), held a terrible fashion party that was “powwow-themed” and was called out by Indigenous writers.

Rather than defending their actions, or claiming that their detractors were just being hypersensitive, the company formally apologized, took responsibility for their actions and made steps to rectify the situation by consulting with Indigenous designers on new, authentically First Nations collections. I’m not saying that if you make a tasteless Native joke you need to roll out a line of consumer goods in supplication, but a simple, “I see why I was wrong, and I’m sorry,” goes a long way.

[Editor’s note: Since this article was written, the Nepean football team announced it would change its name.]

Michelle Reid is a health researcher, magazine editor and occasional writer living in Vancouver, BC. She is a proud member of the Muskeg Lake Cree Nation but doesn’t use that as an excuse to wear headdresses to music festivals. She tweets frequently as @ponymalta.

This article originally appeared in Rabble.ca.