join us donate
LOG IN or SIGN UP
Liquid syntax error: Error in tag 'subpage' - No such page slug join
find a vendor
November 15, 2012

Vendor Voices: Megaphone vendor Kris Cronk on how a friendly stranger inspired him to turn over a new leaf 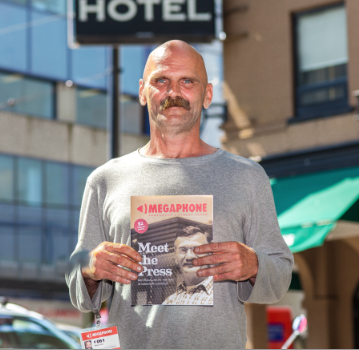 Here she comes, up the street on her way to work, just like she has on so many occasions. But unlike before, she doesn’t pass my way any longer.

A woman who worked at Holt Renfrew used to come by daily back when I was a panhandler. With a smile, she would stop where I would sit with my hat out for spare change. She would always ask how I was with true concern. She could tell, somehow, that I was in the midst of inner conflict. So she would always leave me with words of encouragement and hope for a better life for me down the road.

She once stood up for me to a co-worker who had called me a bum in front of her. After that, she would always remind me to keep my chin up, learn to trust and stop living in fear. Back then, I was afraid of everyone and everything.

A couple of years have passed since that time. I no longer panhandle. Now I am a Megaphone vendor. When I met the woman from Holt Renfrew, my marriage was over, I had hurt my back quite seriously and had two surgeries and two procedures done by my spine. I have severe sciatic nerve damage.

She once suggested I keep a diary and write every day. I followed her suggestion. Eventually, I opened up so much that I now have seven hours of podcasts on the internet where I express everything that has happened in my life. The process has freed me of my fears of rejection, self-loathing, and lack of self-worth.

I have now been selling Megaphone for one year. In that time I have transformed into a person I remember from years past: self-confident, open, trusting, willing to take a chance again.

I used to think it was me against everyone else, facing unbeatable odds. But now, because of Megaphone and the Holt Renfrew lady’s encouragement, I have etched myself a little corner of the world where I feel respected and almost loved at times.

Because of the woman who worked at Holt Renfrew, I opened myself up and won. Because of her, I sell Megaphone. She gave me the courage to take that step. I owe her my life.

I still see her around, but she doesn’t come by my way anymore. Regardless, I pray that somehow one day I will be able to talk with her again. I hope she’d be surprised at my progression to who I am today.

I love selling Megaphone. The woman from Holt Renfrew started something up in me that just keeps growing. Over the months, I have come to recognize the good in people and, in turn, they in me.

I have numerous people in my life now just like her. I notice more and more of them as the days go by. People like the chef, the teachers, the geologist, the lawyer, the security guards who I’ve come to know at my corner, all of you.

To all of you, I thank you.