join us donate
LOG IN or SIGN UP
Liquid syntax error: Error in tag 'subpage' - No such page slug join
find a vendor
February 17, 2011

Who Loves You, Baby?: Explaining Vancouver’s most ubiquitous graffiti 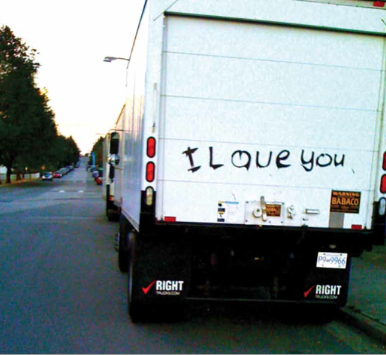 If you’ve been walking around Vancouver, and it isn’t raining, you’d be able to look up and see all of the visual art our graffiti taggers have created for our viewing pleasure.

A couple of months ago, you would delight in finding some positive graffiti tags depicting their love for you, and for you, and you and you. “We love you” and “I love you” graffiti tags marked up the walls of Vancouver prompting most people to respond, “But you don’t even know me.”

To understand these marks, you would have to understand the difference between what is a public mural, graffiti and tagging. A mural is easy enough to spot, it is usually a visual artistic work. The art is the primary concern with a mural. Graffiti usually has an artistic concern, but it can be representative of a public statement or, in some cases, a gang’s sign of proprietorship of space. Finally there is tagging, which is more focused on the persistent need to mark one’s name, signature or symbolic statement.

When the tags of “I Love You” and “We Love You” popped up across Vancouver, the question of what these were loomed across the city. Had a new gang of optimists moved into the city? Was this an artistic statement?

The poetics of the street are written through graffiti. Language is confronted with every day, and there is no easier way to make a public statement than on the walls of public space. When the Olympics were coming, it was hard not to find “Riot 2010” scrawled on a building; take a walk through Gastown and the public discourse is everywhere: “Go kill yourself”, “At the end of the day, what did you earn?” and, my favourite, “Property is theft!”

Take a closer look around the city and you will notice the tagging of  “eR.” The tagging of signs throughout Vancouver leaves small slips into the gang underbelly of Vancouver.  It weaves through the entire Lower Mainland, and all you need to do is follow the signs to see where  it exists.

All of these statements are understandable in a public context. There is a reason to them; angry statements in Gastown reveal the anxiety of an expensive part of town colliding with an impoverished one, and gang signs provide a symbol of areas they inhabit. But what do statements of adoration have to do with anything?

At first, I could only hear remarks of enjoyment for the “I Love You” tags. Everyone was taking pictures of it with their iPhone, posting them to their Twitter and Facebook accounts. There was something endearing about seeing tagging that involved such a positive and common phrase. Going around Vancouver, where tagging is so prevalent, the idea that someone or a group of people decided to respond back with a positive message all sounded like a good laugh.

The statements are going under the radar of the Vancouver Police Department. According to Const. Lindsey Houghton, the tags have not been reported. Not a single report could be found about these statements of love from any of the 100 graffiti tags reported to the police.

And now the tags won’t stop. Like the boyfriend you broke up with in high school, the “I Love You"s have become persistent. No matter how many tags show up, there is always someone with a response of “We Hate You” or “Go Fuck Yourself.”

So what does it all mean? The streets have always been open for public discourse, but why the automatic negative responses. For one thing, graffiti is usually a space for negative statements anyway. Writing something in the public is usually a good space for someone to complain about things.

There is something else implied within the ambiguous message—something that didn’t become obvious until the responses in the Downtown Eastside appeared. The response “Our Street!” found itself literally on the street of Carall and Hastings, just a few steps away from “We Love You.” It was the use of “We” “You” and “Our” that made it all too clear: these positive messages across Vancouver are actually hidden messages of dichotomy.

In simple terms, the tagging states there is a group of us, and we deem it necessary to tell you  that we love you, even at the expense of private/ public property. The messages parallel the grouping or clique anxiety of Vancouver.

What the “I Love You” and “We Love You” tags do more than anything is elicit a response, either negative or neutral responses such as “We love you too” or, a personal favourite, “Elephant shoes you too”. But the responses are becoming overwhelming. Each time the tag shows up, a series of responses appear quite quickly afterwards. The series of tags read like the inside of a public bathroom stall, except there is no one to call for a good time.

These statements seem to be leading to more inane or ambiguous statements such as “grad 78” “sperm demon” and the image of a clown face surfacing along Main Street and towards  downtown. The tag also induces anxiety. “I Love You” comes to mean many different things depending on the person. For a friend of mine they reminded him of a recent break-up. For myself, they reminded me of a heart I broke.

What makes these tags particularly frustrating is their persistence. Someone paints over them and the next day they show up again. We’ve seen city buildings get tagged, repainted, tagged, then repainted like some sort of bad comedy sketch.

Is it an artistic statement, a political statement, the rantings of a forlorn lover or the result of someone’s boredom? The tagging leaves us wondering: what’s the point?