World in Crisis: Louise Arbour navigates conflict with the hope of bringing peace 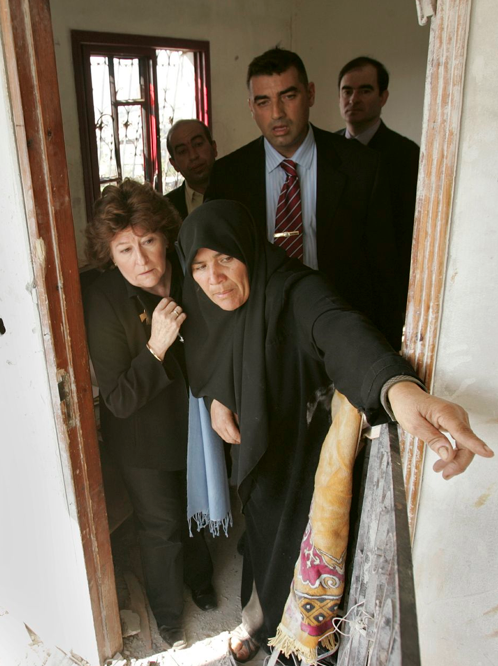 United Nations High Commissioner for Human Rights Louise Arbour (L) visits a house, which was hit by an Israeli artillery shell on November 8, 2006, during her visit to Beit Hanoun town in the northern Gaza Strip in 2006. Photo: REUTERS/Mohammed Salem.

Through previous positions as the UN High Commissioner for Human Rights, former justice of the Supreme Court of Canada and Chief Prosecutor of the International Criminal Tribunals for the former Yugoslavia and Rwanda, Louise Arbour has spent her life fighting for a fairer world. As the recent crisis in Syria demonstrates, her work in fighting for peace and equality is far from over.

Louise Arbour’s career impresses and inspires respect. Among her many accomplishments, the most well-known judge in Canada accused the former president of Serbia, Slobodan Milosevic, of war crimes when she was the chief prosecutor in the International Criminal Court for the former Yugoslavia and granted Canadian prisoners the right to vote when she was a judge at the Supreme Court of Canada. Yet she remains humble regarding her achievements.

“Having a heart is half the battle,” she said about the passion that motivates her. According to her, expertise is nothing without passion, something that holds true for all walks of life.

Arbour is a hands-on type of woman. After scouting the four corners of the globe to find community groups and non-governmental organizations (NGO) to work with while she was High Commissioner for Human Rights with the United Nations, she now goes mainly between the capital cities in order to find the “people who make decisions and try to influence them” in the scope of her role as President of the International Crisis Group (ICG), an NGO that specializes in preventing and resolving armed conflicts.

It’s a task that demands a lot of patience and diplomacy, when you know that each country—just like each individual, she highlights—acts first and foremost according to its own interests. “International order is not based on altruism,” she said. “There is no point in dreaming; a country’s agenda favours their own interests.” Is Arbour pessimistic? Not at all. She sees herself as more of a realist.

The well-respected judge believes in a fairer world, but she recognizes that she has to deal with circumstances beyond her control. As an example, she

pointed to China’s rise to a significant economic power, which worries many actors on the international stage. “I often hear diplomats saying that it will be catastrophic because China is only concerned about its own interests,” she explained. “As if it were different for the Western world, as if the intervention of the West in Africa, for example, were based on a big pattern of charity and altruism.”

Perhaps it is merely a fact of human nature. Arbour believes that worrying about one’s own interests first does not necessarily stop us from furthering the common good. “When you look at philanthropy, people put their money into areas that interest them to boost their reputation, which allows a lot to be accomplished all the same.”

How does Arbour hold a job where she has to make delicate decisions while maintaining her composure? “When you deal with arrogant, selfish people who disregard others, it is difficult to suppress a sense of anger,” she admitted.

But the judge believes that you have to channel this type of feeling in order to tackle problems efficiently. “I stopped getting angry a long time ago as it gets you nowhere. Even delays at the airport don’t anger me anymore!” joked the globetrotter. “I think I’ve become a little more zen,” she added. “When there are things that we can change, I think it’s better to let reason guide us. We do just need that little bit of anger to give us that push to act.”

Arbour is a woman of principle and one of the most important principles in her eyes is integrity. “I attach a lot of importance to it because I think that confidence is founded on integrity. We can do nothing without the confidence of others. It is the foundation of collective work,” she said confidently. That has sometimes earned her some harsh critics.

When she criticized Israel during the conflict with Lebanon in 2006, then Conservative Minister of Justice, Vic Toews, declared that she was an embarrassment to Canada. Nevertheless, even if Canada was the only country not to thank her upon leaving her post as High Commissioner in the United Nations in 2008, Arbour keeps her head high and does not back down from challenges. 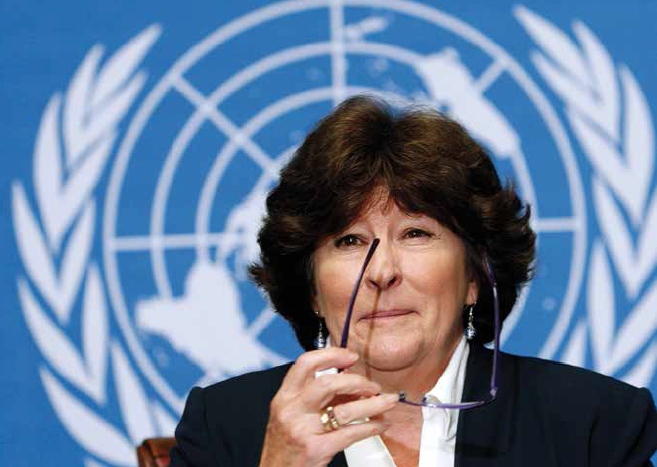 Towards a more inclusive society

Arbour firmly believes in the fundamental values of democracy. “To think that you must delegate everything to the government is a very poor model of democracy,” she said, adding, “democracy is more than elections being held where a government is chosen and allowed to govern for four years.”

According to her, there is no need to stand for election to be in politics— an offer that she has declined on numerous occasions to different parties. Civil society plays just as significant a role in politics, not only by offering humanitarian services, but also by encouraging society to reflect on its values.

“Involving civil society is a way of supporting or criticizing the government and of self-managing between citizens,” explained Arbour, stressing that the United Nations could not function without the efforts of nongovernmental bodies on the scene such as Doctors Without Borders and Oxfam.

Her dream for a better world is “to see more democratic societies, but also societies that strive to create more fairness.” More precisely, that depends on having credible institutions managed by “good-willed individuals.”

When Arbour talks about credible institutions, she is referring mainly to judiciary systems as, in her opinion, the law is above everything. She points to the ruling by the United States Supreme Court in 2010 approving the reform of health insurance of the Obama administration, a decision she described as “a ruling that furthers both the fundamental rights and democratic agenda of the United States.”

Closer to home, Arbour has a lot of confidence in the Canadian determination. Questioned on Bill 78, a law passed in 2012 restricting the right to protest in Quebec, the judge assured with a convincing tone that “if this bill poses a threat to fundamental liberties, the tribunals and the Civil Rights Commission will make sure that it will be put back on track again.”

Arbour mentions that since the adoption of the Canadian Charter of Rights and Freedoms in 1982, the Supreme Court of Canada has played a very important role in the control of democracy and the protection of the rights of minorities.

Among them, drug users obtained the favour of the Supreme Court of Canada two years ago when the court refused the Conservative government's efforts to close Insite, Vancouver’s supervised injection site and the only one of its kind in North America. As a member of the Global Commission on Drug Policy, Arbour applauded the decision. In an interview, she stated that the ruling was “exactly the model” that she advocates, arguing that the ongoing war against drugs is repressive and ineffective.

Everyone dreams of changing the world. Arbour does it. But in her humble opinion, each individual contributes to it, be it by actively campaigning in certain political cases or by simply evolving the environment we live in.

“The way we raise our children can change the world,” she said. “What’s important is changing it in the right direction.” Having advanced the rights of numerous people—Canadian detainees, ethnic and sexual minorities—Arbour has accomplished the task hands down.