join us donate
LOG IN or SIGN UP
Liquid syntax error: Error in tag 'subpage' - No such page slug join
find a vendor
December 05, 2012 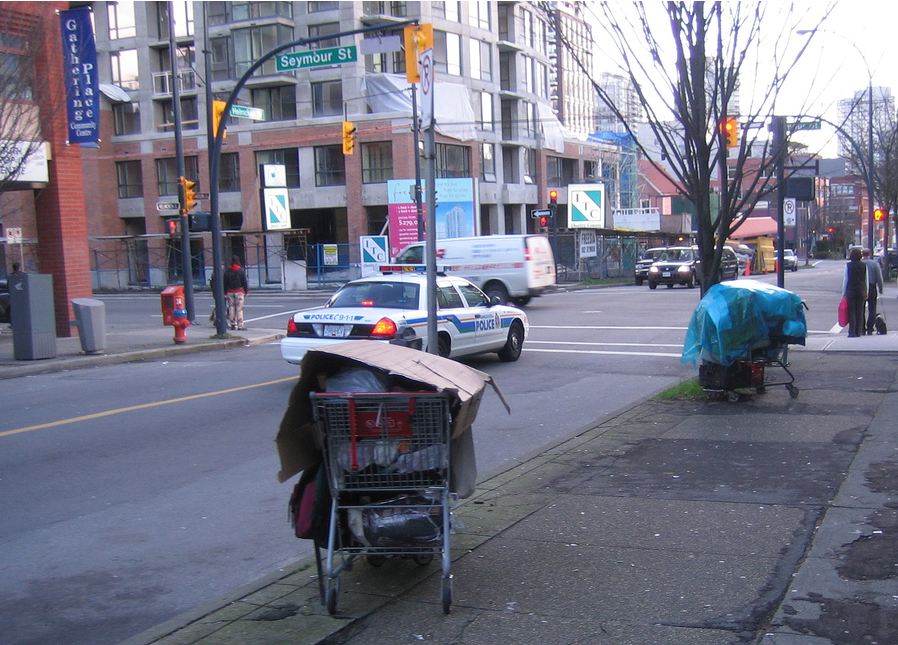 It was a beautiful sunny day in Vancouver, but I was not so bright. No, I was a damn wreck. My life experiences and decisions had led me down a futile path. That path was crystal meth. Life as I had known it had faded. My silly, hyperactive, jubilant attitude that I once possessed was robbed from me from the poison that I willingly ingested.

I was thin, gaunt, my face paralleled with the emaciated features of a concentration camp prisoner. I had no idea of the events that were to take place that bright afternoon, but if I did I would have taken caution, as any sane human would. That’s the thing, though: I wasn’t sane. Amphetamine psychosis robbed me of my mental health and I was left with a despondent mixture of angst, anger and fearless rage.

I was hanging around the Gathering Place at the corner of Helmcken and Seymour, which was, incidentally, a place to score jib as well. Who do I see coming up the block on my bike.

How did Mr. Black get my tricking Cannondale bike? It was my $3,000 bike that I loved and cherished.  Black laid his bike against the brick wall and I made small talk.

“Not much just chilin,” he responded.

“It ain’t your bike,” he growled, teeth clenched.

“Dude it’s mine,” I repeated, with my eye on him and my hand on the frame of the bike.

I started to rise from the haunches where I had been squatting. “It’s not your bike,” he again asserted. And that was it. I don’t know who made the first move, but I had him pinned against the wall and he started doing something peculiar that puzzled me.

He took me and made me feel secure that I would gain victory in a skirmish. Then, he was swinging his arm and touching my body ever so slightly, kind of tapping me me on the arm and belly, his jacket making a swoosh swoosh sound, and then the horrible truth set in. As I looked I could see my muscles and spaghetti-like things exposed, and blood squirting out of my body. My lower left torso was struck as well. Just above my pelvis. Shock was setting in. I started to feel a cold kind of burning feeling, and a big pool was getting bigger.

I figured that I should hold myself together. So I kind of just went to my knees and I hugged myself, but Mr. Black was not finished. He started walking slowly toward me, with the pocketknife he possessed. And I knew nothing other than to say, “Get the fuck away from me,” and surprisingly, he backed away slowly and picked up the object of our feud and rode away slowly.

I was safe, but for how long? Seeing some people looking and gawking, I yelled at them to call 911, and all I could do was wait. I was getting really sleepy and cold when the security guard, Butch from the Gathering Place, came and gave aid to me. Keeping pressure on my wounds, he assisted me until paramedics came and took over. The weirdest thing I can remember is that they kept asking my birthday. I had to repeat myself like seven times. Are there not more important things to worry about right now besides the day I was born?

I found out later that they ask questions like that so they can gauge your physical state by the type of reaction and the time you take to answer repetitive questions. I think it helps you keep focused instead of drifting off to meet the grim reaper.

Arriving at St Paul’s, I was rushed in and I could feel my wounds really burning. I asked if I could get something for the pain and shazoooom, ahhhhh.... I was given morphine. And then a mask was held to my face and as instructed I started counting back from 10, nine, eight, sev...

I woke up and my eyes slowly opened, my buddy Ryan was sitting there with my mom.

I looked at my arm full of stitches. There were 14, and my gut had a collection of eight staples. I was very lucky as no organs were hit, and I had survived. The cops came asking and pleading me to tell them who had stuck me like a pig, but I kept my mouth shut.

Darren is former a participant in Megaphone’s community writing workshop at Onsite.