join us donate
LOG IN or SIGN UP
Liquid syntax error: Error in tag 'subpage' - No such page slug join
find a vendor
October 25, 2011

Wrong Side of the Tracks: Pivot Legal Society to file suit against transit cops 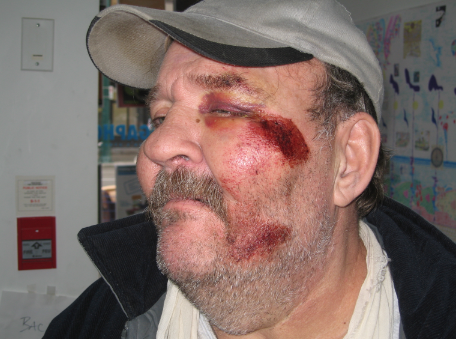 Gordon Wesson after the alledged violent assualt that occured when he was removed from a TransLink bus stop by a transit police officer in January.

Thanks to misinformation about TransLink’s disability pass policy, Pivot Legal Society is currently in the process of filing a civil suit against the Transit Police Service after a disabled man was injured earlier this year by an officer who arrested him for boarding a bus with an expired pass.

Gordon Wesson was riding the SkyTrain on January 11, 2011. As his new pass had not arrived in the mail yet, he approached transit police at the Olympic Village station to ask them if it was okay to ride.

“He was thinking ‘If these guys check my fare, and I have an expired disability pass, they might give me a ticket, but if I just go up and ask them nicely, they might just say it’s okay,’” says Douglas King, a Pivot Legal Society lawyer. “So he went up and he asked them, and they said it wasn’t okay, that he needed to either pay a fare or leave.”

Far from home and his destination, Wesson left the station and tried to board a city bus. But the officers saw him and, according to the police report, Officer Stanton Edward Hyde followed Wesson onto the bus, ordering him to get off. Wesson refused, and that’s when things got physical.

“I said I have a stroke in this hand (right) and he said, ‘I don’t care.’ He pulled (my arm) behind my back, because I can’t put it behind my back,” Wesson told Megaphone. “I told him I’ve had five heart attacks, and he didn’t even give a shit about my heart attacks. And I’ve got Crohn’s Disease. After an accident like that he could have killed me.”

After the arrest, Wesson was taken to the hospital where doctors discovered a cracked elbow, which Wesson claims came from Officer Hyde forcing his arm. Wesson has since been charged with breach of the peace and heroin possession, the result of heroin found on his person during a police search. He faces those charges in court next March.

TransLink communications told Megaphone the company does give disability pass users a grace period to receive their new annual pass in January. The length varies, but this year it ended on January 16—five days after Wesson’s arrest. The transit authority would not comment on whether the transit police knew this. Pivot has already filed a policy complaint with the transit police authority, asking for a grace period to be extended to the entire month of January.

King says a civil suit will follow before November.

“The end goal is both kind of individual satisfaction for the client, you get compensated for what happened, but also the bigger issue is police accountability,” says King. “Without a working police complaint system, the only real way that police are going to get the message that they’ve done something wrong, and that their actions have consequences, is if there’s a judgment rendered against them.”

Transit Police Service say they are unaware of any policy complaint or impending civil suit, and urge Pivot and Wesson to contact them directly about the case. One spokesperson told Megaphone the service takes any complaint about officer conduct very seriously, but there are methods other than civil suits to address it.