"The Accident" by Mick Goodhart

“Do you know where you are?” asked the paramedic. “Am I dead?” I answered. He replied, “No, but your leg is badly broken.” “ATM Bill, what are YOU doing here?” I asked the short bald-headed fellow.

ATM Bill. We called him by that moniker because he owned a few of the private ATM machines, or so he said. He was a con and a scam artist who managed to live at our house rent free for several months. He had a small scratch on his forehead. “You saved my life, Mick,” he responded emphatically.
I remembered pushing him out of the path of an oncoming vehicle, the same one that had struck me down. “The only thing I want to know, Bill, is: were we crossing against the light?” “Absolutely not!” he answered.
He then proceeded to try to bilk me out of the $17 in my wallet, insisting I would have no use for it in the hospital. Later, behind my back, Bill altered his statement to ICBC so his did not agree with mine, and in the end ICBC found me at fault for my injuries.
I received no compensation though I was a pedestrian on a green light in a crosswalk at Davie and Pacific. We had just finished eating the free Thanksgiving meal at the Sally Ann, and we were sober and heading home when the accident occurred.
After spending more than six weeks at VGH, my discharge was imminent. But I had no place of my own to live. I could have gone back to the room I had been renting at the time of the accident, but I wanted to be far away from the using.
As luck would have it, I had recently befriended a fellow whose wife was a nurse in the orthopedic ward. They offered to let me stay with them for a while so she could change my dressings daily and give me a safe place to crash.
Unfortunately, this arrangement was temporary, and since I was not receiving social assistance and had run out of shelters, friends, couches and other suitable habitats, I soon found myself living day-to-day, alley-to-alley, hand to mouth. This continued for a few years until I eventually decided that my life was no life at all.
Tired of band-aids, it was finally time for me to make a drastic positive change by re-entering rehab. When i arrived at Maple Ridge Treatment Centre (MRTC), my dear sister Diane was ecstatic that I was taking another stab at treatment—but she had her own grave problems. She had just been diagnosed with breast cancer. My sister has also had diabetes since age 11, and with that disease any malady can be devastating.
When a diabetic goes under anesthesia, they may not wake up as the anesthetic may interfere with their blood sugar level and cause a fatal reaction. So not only was the cancer itself serious, but the surgery, too.
I then decided that getting (and staying) clean was imperative, for both of us. She needed my strength to anchor her, and the fact that she needed me gave me meaning and purpose. I realized I had a reason to be alive, too.
We were in daily contact. Ordinarily I didn’t talk to anyone in my family for months at a time, especially if I wasn’t doing well—and I was never doing well.
Diane was scared shitless to even undergo the biopsy. I found it easier to wish her success than to feel sorry for the discomfort I experienced withdrawing from cocaine and heroin. We needed that close family tie. She was proud of me for my accomplishment and I felt immensely proud of her courage.
Addicts have low self-esteem so it was easier for me to justify my efforts to clean up if I did it for the benefit of my family as well for my own. After completing the mandatory five weeks at MRTC, I graduated on my birthday and went directly to Turning Point recovery house to help ensure against relapse.
Approximately 25 days later I received a call from the Jewish Family Service Agency (JFSA) saying I had been awarded a subsidized apartment, another gift of recovery, in addition to being approved for disability after being twice denied.
Because I finally took charge of my life and started actively seeking help to change, I secured a decent place to live on my own, and financially, although not wealthy, was just able to get by. 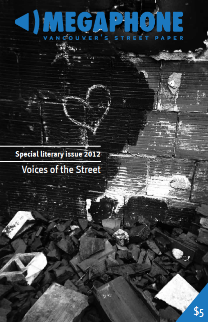 Mick sells Megaphone in front of Meinhardt at 14th and Granville in Vancouver. "The Accident" is featured in Megaphone's 2012 special literary issue, Voices of the Street.