join us donate
LOG IN or SIGN UP
Liquid syntax error: Error in tag 'subpage' - No such page slug join
find a vendor
June 18, 2012

Aboriginal women are overrepresented in the sex trade. Is there a way out? 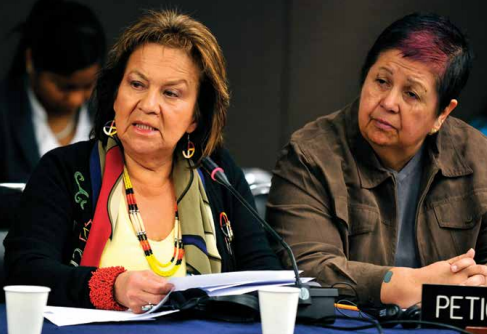 Sex trade law has occupied the forefront of feminist debate ever since an historic legal challenge to Bedford v. Canada was filed in 2007. The case argued that existing laws that criminalized pimping, public communication for the purposes of prostitution and operating a bawdy house were unconstitutional. On March 26, 2012, Justice Susan Himel ruled to decriminalize brothels in Ontario.

While most feminists would agree that the current laws are problematic as they criminalize women with few other choices but to sell sex, advocates are divided on the best way forward. Issues such as poverty, racism, addiction and sexism define who enters the sex trade, not only in Canada, but worldwide. Still, many talk about the so-called choice to engage in sex work without considering a context of inequity and oppression as central factors that lead women into industry.

Jeannette Corbiere Lavell, president of the Native Women’s Association of Canada (NWAC), maintains that women in the sex trade should not be criminalized, but she is firm in her opposition to legalizing brothels. She wants the focus of criminalization to remain squarely on the pimps and johns.

A history of racism

“Because of that colonialist mentality, many people think that Aboriginal women were always prostitutes,” said Lavell. She says this is not true, rather that native women and girls ended up in prostitution due to a breakdown of Aboriginal families and cultures. “It’s not part of our traditions. This is not who we are, it never has been,” she said.

“In talking to our elders, they made it clear that, as a women’s organization, we had to make our voices heard,” Lavell added. “Our women don’t want to be prostitutes. They don’t want to live this life.”

But Lavell says many women have little other choice if they aren’t able to earn money any other way and have children to take care of or elders at home. “So when they are approached by pimps and johns, when they are offered money, it seems like it’s the only way. They are drawn into it.”

A study published in a 2003 edition of the journal Social Science and Medicine shows that 70 per cent of prostitutes working in the Downtown Eastside of Vancouver are Aboriginal women. Jackie Lynne, a member of the Aboriginal Women’s Action Network (AWAN), was struck by the number of Aboriginal women in the sex trade when she started conducting sex trade research back in 1998.

“I started out volunteering at a drop-in centre in the Downtown Eastside. The majority of the women’s faces there were brown, so that inspired my research question, that is: why are so many native women involved in this?”  Lynne, who exited sex work herself twenty years ago, began to trace the historical roots of racism, sexism and classism and found an inextricable link between prostitution and colonialism.

Cherry Smiley is an activist and a front-line anti-violence worker from the Nlaka'pamux (Thompson) and Dine' (Navajo) Nations; she says the fact that Aboriginal women and girls are overrepresented in the sex trade is not accidental. Rather, she says, Aboriginal women are “funneled” into sex work as the result of a history of racism in Canada, a history that includes residential schools, the reserve system and the foster care system.

“All of these institutions that we are confronting on a daily basis are contributing to the situation that native women and girls find themselves in. Prostitution is the consequence of those institutions,” she said. “It’s not as if we all wake up one morning and decide this will be our career path because we love having sex with strangers.”

Choice is not a factor

The rhetoric of choice surrounding sex work was brought up many times by the women I spoke with. They challenged the idea that sex work could really be a ‘choice’ within the context of an unequal society.

“The whole idea of North American liberalism loves the word ‘choice’, but it assumes that we’re all on a level playing field,” said Lynne. The problem with the word ‘choice’, according to Lynne, was that it diverted attention away from the issue of demand—who is buying the women and who is perpetrating the abuse. “We need to frame the issue of prostitution within a human rights argument and a framework of women’s equality and I don’t see enough of that happening,” she added.

“If true equality existed, prostitution wouldn’t exist. Prostitution exists because inequality exists.” Lynne said. “If we look at prostitution and prostitution law through that lens, we must ask ourselves whether decriminalizing pimps and johns really makes sense in terms of working towards an equitable society.”

Smiley says that the idea that women simply ‘choose’ sex work as a career is offensive. “If that were the case, then that would mean that native women and girls just like to have sex with strangers way more than white women do, like in disproportionate numbers,” she said. “It feeds into racist myths that say we’re savage, uncontrollable, unintelligent, sexualized bodies, and that’s not true—native women and girls are so much more than that.”

Smiley says that when we focus on ‘choice’, we avoid asking very important questions about the kinds of systems and injustices that lead Aboriginal women into sex work.

It’s impossible to separate the arrival of European settlers and the imposition of patriarchal and capitalist systems onto indigenous cultures. Smiley says this truth is a necessary consideration when looking at women in the sex trade.

“Colonialism and patriarchy go hand in hand,” she adds. “It’s the same thing.”

And indeed, the history of colonialism in Canada shows inextricable links to the introduction of patriarchal ideas to what is said to be, traditionally, a more equitable culture.

Lavell tells me that, before Europeans colonizers first came to the area known as Rupert’s Land (eventually to become Canada) to establish settlements, women were held in very high regard. Inequality and the idea that women should not have equal rights and decision-making power was “an imposition from the outside Western culture,” Lavell said.

“All I know is what was taught to me by my grandmothers, which is that there was a sense of equality pre-contact. Women were actually free,” said Smiley. 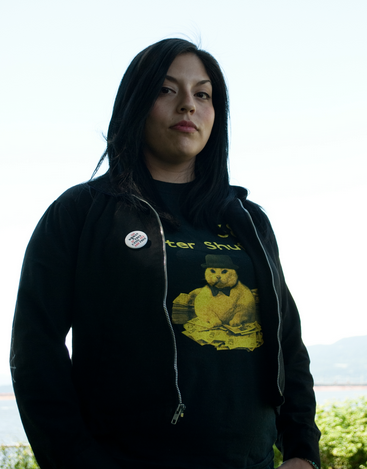 While of course, things weren’t perfect, oppression didn’t happen on a systematic scale until Europeans came over, Smiley told me. “They saw that in a lot of First Nations communities, women were respected and had power and had decision-making ability. They were more on an equal footing with men and I think that pissed them off,” she said.

“I can’t think of any more undervalued class of women than native women,” said Lynne.

European women weren’t allowed to immigrate for the first 100 years of colonization, Lynne told me. As a result, colonialist men took what were referred to as ‘country wives.’ These were native women who were used so that fur traders and trappers could gain access to their knowledge. Such information would help the men to survive in this unfamiliar territory.

“These wives were used for their knowledge and for sex,” said Smiley. “In return these women would get some form of safety or food but once white women were allowed over, the native women were kicked to the curb and left with nothing.” There were also, of course, brothels set up at that time.

Based on these conditions, Lynne says that First Nations women became Canada’s first prostituted women. A racist, sexist and classist history of sexual exploitation is not limited to Canada, of course. “If you look at prostitution on a global scale, which is always an important thing to do, you’ll see that it’s mostly women who are prostituted and that within that,” said Smiley. “It’s mostly poor women, indigenous women and women of colour who are in prostitution.”

Smiley also points out that “a lot of native women and a lot of women who are on the street are suffering from addiction issues and mental health issues. What about those issues? That’s a result of patriarchy and colonialism right there. Women are using drugs and alcohol to bury that pain because we aren’t given any real solutions.”

In terms of sex trade laws, Smiley feels that decriminalizing johns and legalizing brothels is not a solution that will help Aboriginal women.

“We’re in pain and we’re hurting because we’ve lost our languages and we’ve lost our land and we’re offered drugs and alcohol to ease that pain,” she said. “Women should have access to what we need to survive without having to be in prostitution—whether that be homes, detox beds or jobs that are fulfilling and that we enjoy doing—we should all have all of those things. Calling legalized brothels a solution tells women: ‘This is it, this is as good as your life is going to get so don’t even think about asking for more.’”

Lavell agrees and says that Canada should create legislation similar to that which has been set up in Norway, commonly referred to as ‘the Nordic model’. This model includes laws which decriminalize prostituted women and criminalize pimps and johns.

Lavell says she is very unhappy with the decision made by the Ontario courts to legalize brothels and hopes it will be reversed at Canada’s Supreme Court.

“If prostitution is legalized, women are still going to be murdered,” she said. “Our women are very clear and very strong on this. And especially the older women who are still practicing our culture and our spirituality.” Lavell wants Aboriginal women and girls to be given other opportunities, not simply be moved into brothels.

The problem many advocates and women’s groups see with the debate around sex work law is that there is a lack of focus on the buyers—the men.

“I’d really like as much as possible to put the attention back on stopping demand,” said Lynne. “Feminists are being forced to have these ineffectual conversations which don’t hold men accountable at all. These conversations around whether or not to legalize detract from what I consider to be the source of the problem.” She wants men held accountable for their actions and behaviour.

Smiley agrees, and feels like conversations around legalizing brothels distract from the real issues and avoids providing real solutions to girls and women who are living in poverty or are dealing with addiction.

“The solution isn’t to hand over women and girls on a silver platter and say: ‘Have at them.’ The solution is to say: ‘Change your behaviour.’”