join us donate
LOG IN or SIGN UP
Liquid syntax error: Error in tag 'subpage' - No such page slug join
find a vendor
March 13, 2020
by Simon Cheung follow this author
photos: Last November, the Balmoral and Regent hotels were expropriated by Vancouver city council. By December, the buildings’ owners, the Sahota family, had filed a legal challenge in BC Supreme Court. Christopher Cheung image.
feature 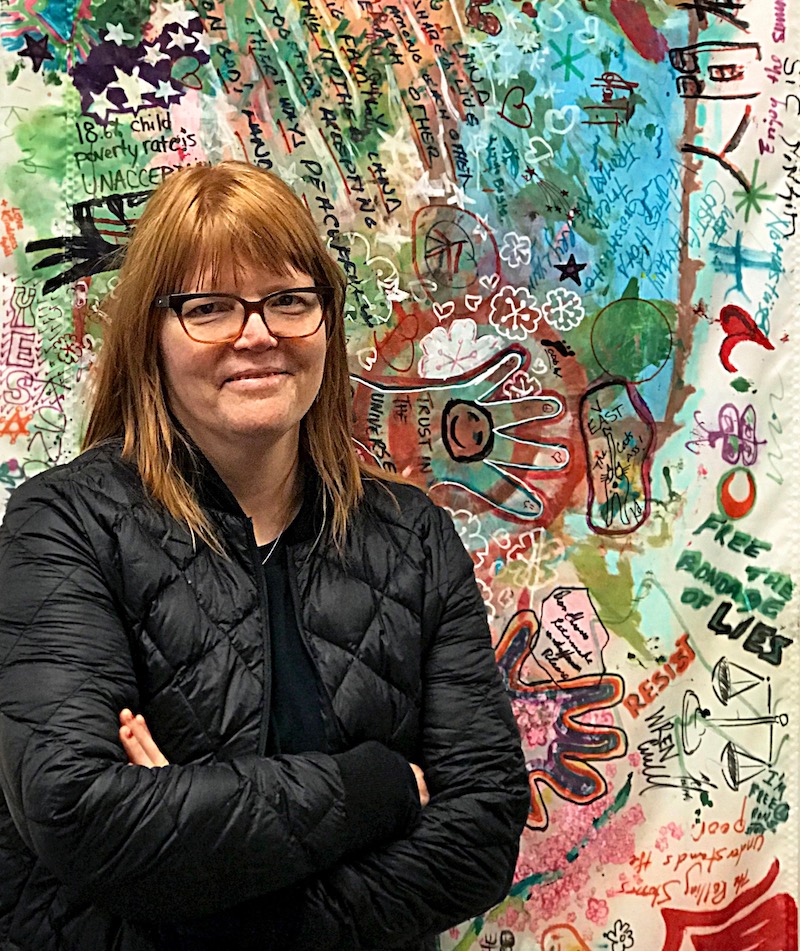 The Balmoral and Regent hotels have ben expropriated and the possibility of rent control blooms. We asked Wendy Pedersen what's next for Vancouver's Single Room Occupancy buildings. Paula Carlson photo.

After all, the path to a historic victory that taught Pedersen a sobering lesson on affordable housing advocacy has been an arduous one.

Yes, she says, Vancouver City Council made the right decision to expropriate the Balmoral and Regent hotels on Nov. 6, 2019. In fact Pederson was, in her own words, overjoyed.

“It’s a big win, for sure,” she says in the war room: the Keefer Street office of the (SRO-C) Downtown Eastside SRO Collaborative Society (some of the members pictured below). 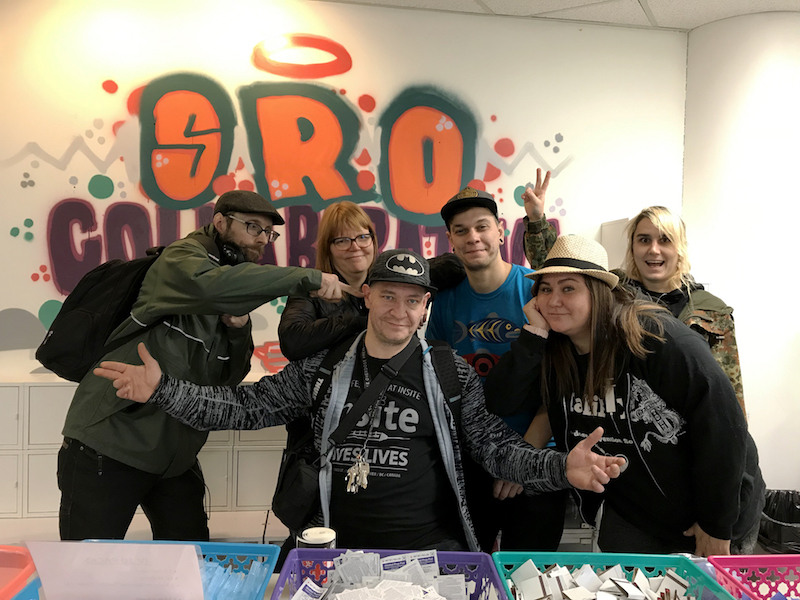 And yes, council said all the right things while making their $2 purchase ($1 for each hotel), affirming that the reason was specifically to provide social housing to low-income citizens—the first time the city has ever expropriated for this purpose under the Vancouver Charter.

Pedersen, a community organizer with the SRO-C—established in 2015 to organize and empower Single Room Occupancy tenants—even received an e-mail from city staff promising to stay in touch while developing plans for the site.

“It was shocking,” she says. “We just banged our heads against the wall for so many years that it was quite unbelievable the city actually backed us up.”

She still remembers, for instance, that past city councils had the authority to repair both crumbling, rodent- and mold-infested buildings in order to give tenants livable, safe homes. They could have repaired them and billed the owners, members of the Sahota family. They didn’t.

At the time, Green Coun. Adriane Carr, one of only two incumbents from the previous Vision Vancouver-dominated council, repeatedly questioned her colleagues on that.

“The answer I kept getting,” Pedersen recalls, “was there was no confidence that the courts would award the repayment. This council, I think, would have pushed harder. I get the sense that there would have been, out of this council, a much braver attempt.”

Housing activist Sam Dharmapala recalls pressing council on the issue as well, only to be told that the city had insufficient funds to repair the buildings.

Instead, on June 12, 2017, Vancouver council simply shut down the Balmoral Hotel after finding it was at risk of collapsing. A year later, in June 2018, the city also ordered the Regent to close.

“The Sahotas went 30, 40 years without fixing those buildings… what had the city done all those years?” Dharmapala asks. “This problem is 30 to 40 years old. It’s all negligence.”

Initially, the city had no better plan than sheltering the evicted on mats in three community centres. For 14 days and nights leading up to the eviction date, Pedersen, Dharmapala and Balmoral tenants staged a sit-in at the Balmoral, refusing to leave unless the city provided permanent housing and compensation.

In the end, they got both. And the closure of the Regent went far more smoothly.

But the Balmoral battle contained a warning for Pedersen: shelter-rate tenants (allocated $375 for shelter each month from social assistance) who dared agitate for better living conditions were in danger, not only from renovictions by landlords, but from full-scale building closures by government. 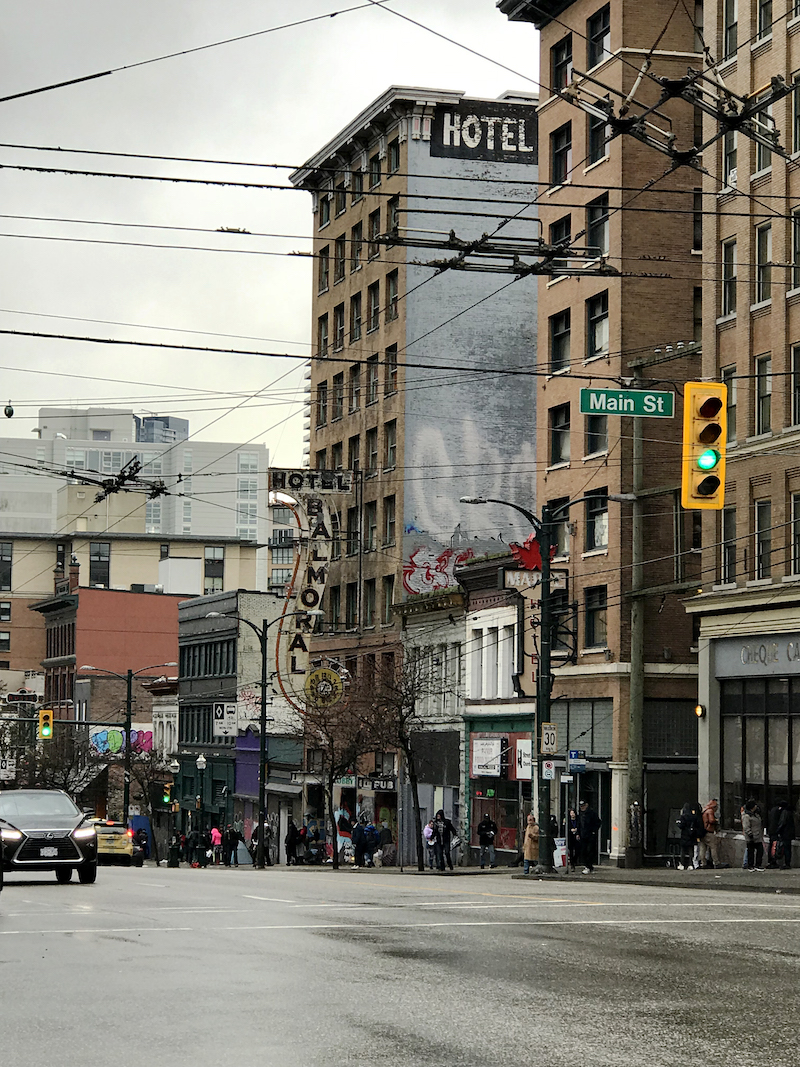 “It was a symbolic message to tenants that, if they tried to seek improvement, they would become homeless,” she says. “Not only did we all risk our lives initially, and put in way more hours than any human could ever imagine into that project, but at the end of the day, everybody was going to become homeless.”

“I can’t even begin to repeat the whole story of all of the things we had to do to pressurize that situation so that the good results could happen,” she says wearily.

Dharmapala recalls Pedersen working until she was physically ill.

“After the Balmoral and Regent shut down, I spoke to Wendy,” he says, telling her: “We need to find another way to solve this problem.”

Dharmapala has unique knowledge about the hotels and their notorious owners.

In 2008 he started work as a part-time bookkeeper for the Sahotas and oversaw maintenance at both buildings until he was fired in 2016 for leaking information to Pedersen.

He capitalized on his position and connections within the Sahotas’ organization, playing a key role in an aggressive advocacy plan that included turning Sahota employees against their employer, covertly obtaining company photos and documents, and training tenants not to retaliate against the strong-arm tactics employed by their landlords.

Along with pulling the city in line with their cause, the fight for fairness, was, Dharmapala remembers, a massive amount of work and difficult to replicate.

As well, the simple math of the circumstances exposed the cold, hard capacity issue at the crux of Vancouver’s affordable housing crisis: successfully relocating Balmoral and Regent tenants into alternative affordable housing still just pushed other homeless individuals further down the list.

The two hotels stand across the street from one another on East Hastings Street just west of Main, and for decades they housed upwards of 300 low-income residents. Beyond the tenants who officially paid rent for a room, Pedersen estimates that between 700 and 1,000 people found shelter at the hotels every night, either as guests of tenants or in the hallways of the aging buildings.

In 2017, the Carnegie Community Action Project tracked a total loss of 500 shelter-rate rooms in the Downtown Eastside. In 2018, with the provincial government funding more social housing, including temporary modular buildings, there was a net increase of 77 units.

“Those advocacy methods just lead to displacement,” she says. “We can make an example of another building, but it’s so hard… to protect tenants from being evicted. There’s no more housing coming. So we’re kind of stymied.”

Lessons learned, Pedersen is currently hard at work on a new strategy, analyzing a habitability study on Vancouver’s remaining SROs with an eye to establishing tenant committees in all privately owned SROs and “trying to build enough capacity to get into these buildings and support tenants where they’re at.”

In particular, Pedersen is focused on protecting what’s left of the city’s rapidly diminishing SRO stock from renovictions.

The average rent of an SRO unit (usually a small room of less than 320 square feet, with no kitchen and a shared bathroom), is around $600 per month.

There are currently 87 privately owned SROs in Vancouver. According to the SRO-C, they are known to be aging, decrepit, lawless and inhabitable places to live with poor maintenance, and numerous health and safety code violations.

“Tenants really can’t agitate for repairs,” Pedersen explains, “because the landlords have an economic incentive to evict tenants—they can increase the rent [without limit] if the tenant leaves, so it’s just a delicate situation.”

Gentrification is a persistent threat, she says.

“Every year, there’s one or two SROs up for sale, and they’re slowly converting to higher-income rental housing.”

The SRO-C website notes that a few dozen hotels were renovicted and in some cases, rents rose to $1,500 a month for a room in these “boutique” hotels. 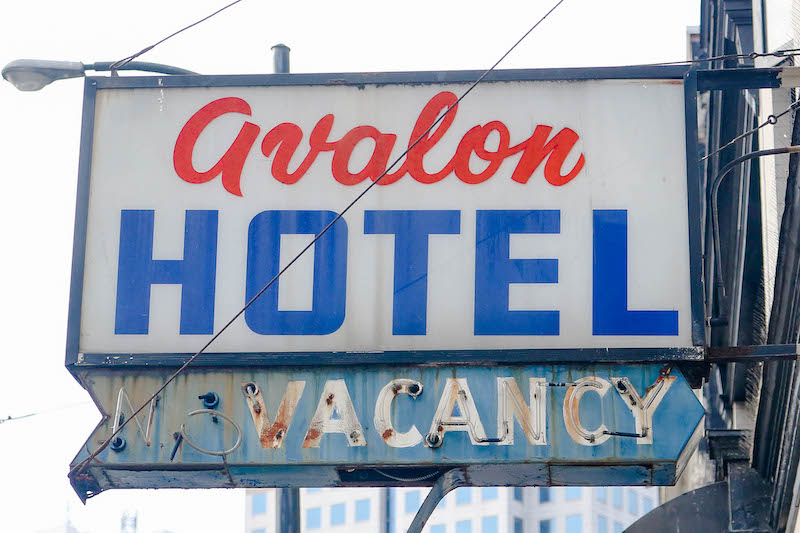 Reached by phone, the manager of the Pacific Rooms said owners Jim and Betty Wu were not available because they were on vacation, but they are no longer planning to sell the building. Paul Bembin said another buildings the Wus recently sold, the United Rooms on Cordova Street, has remained an SRO.

Mina Angelicola owns the Silver Avalon. In an email, her granddaughter, Jenny Konkin, said a non-profit Konkin founded, Whole Way House, no longer operates the Avalon. Konkin did not respond to follow-up inquiries about why the building was up for sale. The owners of the Arno could not be reached for comment.

“What’ll happen if they get bought is landlords will get rid of the tenants by hook or crook, and rents will go up because we have no vacancy control,” Swanson says. “And we’ll have more people on the street.”

Advocates say vacancy control—where a provincial cap on yearly rental rate increases (currently at 2.6 per cent) would be tied to a rental unit, and not each tenant—would simultaneously diminish the financial incentive for renoviction and constrain the gentrification resulting from unfettered shelter-rate rent inflation.

On Dec. 10, 2019, Vancouver council unanimously passed Swanson’s motion to press the province for action on vacancy control and for city staff to explore municipal implementation alternatives. Her motion cited several SRO buildings listed for sale, where renovictions subsequent to sale could diminish Vancouver’s SRO stock by up to 180 units.

“We really need provincial action on it,” says Swanson. “It would really solve a lot of problems, but the landlords are fighting it tooth and nail.”

The province’s inaction is a bit of a mystery to Swanson, but she notes that the conventional counter-argument is that vacancy control would limit landlords’ ability to maintain and improve buildings. Indeed, the Urban Development Institute asserted in November 2018 that such a measure would delay or cancel 12,361 rental units being built at the time.

Swanson points out, however, that landlords can still apply for increases over the cap for renovations, repairs and increased operating costs.

“I think it’s a very faulty argument that you can’t make repairs if you have vacancy control.”

“They’re basically threatening to not make repairs in their buildings. It’s what rich people do when you threaten to tax them. They say, ‘Oh, I’m going to leave with all my money’.”

With Swanson’s motion passing, vacancy control appears to be a priority for city council, though it is still unclear if the province will take any meaningful action, or if Vancouver will attempt to implement it through its own bylaws.

“The province is kind of missing in action for renters” when it concerns vacancy control, Pederson observes. “I don’t know what is holding up the province in terms of helping tenants. I think they fear that there will be some economic collapse. But it’s actually costing them more money to not do it, in terms of homelessness and losing workers.”

Vacancy control is a key variable in the development of her new strategy, she says, as it would allow tenants and advocates to ask for repairs more confidently, without as much fear of eviction.

“And it potentially could bring in the landlords more to collaborate with the community,” she adds.

For now, the Balmoral and Regent, with their 332 dilapidated rooms, sit barren and hollow—battleground monuments to both hope and peril. It is unclear when or maybe even if city council will start construction on the sites, as theSahotas filed a petition for judicial review on Dec. 4, 2019 in BC Supreme Court, challenging the $1-per-hotel expropriation price tag and the city’s statutory authority to expropriate in the way that it did.

This was expected—Carr and Swanson were both waiting for it—but for a city constantly surging forward with higher homeless counts (a record 2,223 in 2019, up two per cent from 2018), such delays can nevertheless be a demoralizing reality.

“One thing I’ve learned, being up here the last year,” Swanson reflects on municipal government affairs, “is that things move really slowly.”

Former Regent tenant Jack Gates is, nevertheless, optimistic. He lived in the Regent from 2014 until its closure in 2018 and was one of the many who stood in solidarity with the Balmoral tenants in the summer of 2017. His advocacy was acknowledged, along with Pedersen’s and Dharmapala’s, during the city’s expropriation decision.

“We’ve got a lot of organizations and people in this community that will fight to, hopefully, ensure that this process is a lot faster than others,” Gates says.

“We really had a community that came together here.”

—with files from Jen St. Denis, reporter at The Tyee.