join us donate
LOG IN or SIGN UP
Liquid syntax error: Error in tag 'subpage' - No such page slug join
find a vendor
April 05, 2012 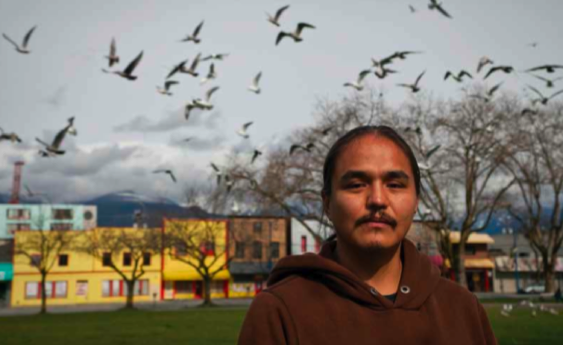 Herb Varley at Oppenheimer Park, near his home in the Downtown Eastside. Photo by Justin Langille.

Herb Varley has packed a lot into his 27 years of life. He’s worked in construction, in warehouses and in the Museum of Anthropology. He’s coached basketball, conducted theatre classes, and toured B.C. and the prairie provinces as an actor. On top of all of that, he’s a green belt in jiu jitsu and sits on the board of directors for the Urban Native Youth Association.

The only thing Varley hasn’t done, it seems, is graduate from high school.

“I was never really a disruptive student. I was just an absentee student. I would skip for weeks and weeks and weeks,” Varley tells Megaphone over coffee at the Waves on the corner of Main and Cordova Streets. “Where I started having a lot of trouble was Grade 9, Grade 10. There was a lot of racism in my school at the time.”

Varley, a First Nations man of Nuu-chah-nulth and Nisga’a descent, is not alone in this predicament. The high school graduation rate for Aboriginal people in B.C. topped out in the 2009/10 school year at 51 per cent, below the much healthier 82 per cent for all students. In Vancouver it’s much grimmer, with just 32.1 per cent leaving school with their Dogwood Diploma compared to 82.5 per cent of students overall.

The fallout from this disparity can be seen just down the street or around the corner from where Varley is sitting. Whereas two per cent of Vancouver’s population identifies itself as having Aboriginal origins, nine per cent of that population resides in the Downtown Eastside. Aboriginal peoples are over-represented in the city’s homeless community (30 per cent), Aboriginal children have almost twice the poverty rate (40 per cent) of non-Aboriginal children and there is a wide range of health issues related to addiction and early death that disproportionately affect the Aboriginal community. It’s a tide that service providers, school boards and community leaders are trying to change.

But reversing more than a century of racism and inequality in education that Vancouver’s Aboriginal peoples face is a long, slow process.

Varley’s commitment to school wasn’t always so lax. He spent his early years in Florida, living with his father, a blue fin tuna fisherman, and grandparents. He doesn’t remember much, but he recalls his grandmother taking education  very seriously.

“I do remember my late grandmother would be really adamant that I do my homework before I did anything else. And I had really early bedtimes, and there was just a routine that I would go through,” he recalls.

When he moved back to Vancouver after Grade 2, Varley lived with his mother, an alcoholic. A high school graduate herself, Varley’s mom cared about education but was wrapped up in her own problems, leaving Varley to decide from a very young age whether he wanted to go to school or not.

“I was able to make it through school by the skin of my teeth more often than not,” he says.

By the time Varley made it to high school at Britannia Secondary School in East Vancouver, he had moved in with his grandmother, and then with his aunt, cousins and siblings. His aunt also cared about her kids going to school, but she worked so much she wasn’t around to make sure they got there.

Then there was the racism

“There were a handful [of other Aboriginal kids at school]. But me and my brother were the two highest profile ones. We wouldn’t take any shit from anybody, and when we saw the younger native students getting picked on, we would stand up to [the bullies].”

Although he didn’t attend classes often, Varley says he maintained a B average by reading his textbooks. But when he did come to school, it was mainly for theatre. He estimates he was in every school play from Grades 10 to 12.

“The only thing that kept some kind of connection between me and school was the acting. Had it not been for that, I would have never even went the 10 per cent of the time that I did,” he says.

But by the time he was 18, staying in school didn’t make as much sense as making money. So Varley dropped Grade 12 and got a job as a labourer.

Working a variety of jobs at a variety of construction sites, Varley pulled in $15 to $18 an hour. He also took on acting gigs, including a tour with Headline Theatre’s production of Meth that took him to Manitoba, Saskatchewan, Alberta and twice around B.C. Earning $1,000 a week, he was doing all right.

But fights with his family led to him being kicked out of his aunt’s apartment, leaving him homeless for three weeks. He found a room in a Single Room Occupancy (SRO) hotel, but after quitting his job in late 2010, he was forced to go on welfare and he lost his SRO. He lived in shelters for three weeks until his cheques started coming in, and then moved into another SRO in the York Hotel, where he lives today. He receives $610 a month for welfare, $425 of which goes towards rent, but his two-year cut-off date is coming next November when he’ll be forced to  find work.

Lynda Gray hears stories like Varley’s all too often. But the executive director of the Urban Native Youth Association (UNYA) cautions against calling people like Varley drop- outs.

“I wouldn’t call it a drop-out rate, I’d call it a push out rate, because our kids leave school because they don’t feel welcome there, they don’t see themselves reflected in the curriculum or the staffing, they often face bullying and racism, and they’re not encouraged to go to university, generally. So expectations aren’t generally high for them,” she told Megaphone.

Gray says that although the residential school system is widely interpreted as being ancient history, for many Aboriginal youth, their grandparents and even some of their parents went to these schools. It instills a distrust of the education system, and a lack of belief in opportunities for Aboriginal people outside of jobs that don’t require secondary school. The result is an over-representation in the lowest economic brackets, poor housing, and poor health rampant among the urban Aboriginal community.

“So many of our families are still struggling with the intergenerational affects of the residential school system and the policies, that they’re struggling with so many family issues: poverty, abuses, broken homes, that they don’t really have the will, or the skills, or the knowledge to think that things could get better that quickly for their own children,” says Gray.

Kids can also feel alienated by their school when they’re singled out to attend alternative or less-academic programs and classes, says Gray. Some Aboriginal students and their parents perceive such alternative methods as racism, typecasting students who are struggling because they’re Aboriginal instead of trying to deal with their problems head on. Others want to immerse themselves in alternative educational programming because they want to stay with their friends.

Gray, who grew up in Vancouver, went to an alternative school when she was 13, not because her grades were poor, but because that’s where most of her friends were and where she felt the most comfortable. Today, in cooperation with the Vancouver School Board (VSB) and the Ministry of Children and Family Development, UNYA offers two alternative programs specifically for Aboriginal students struggling in the mainstream system.

“I think they actually advance kids who wouldn’t advance otherwise, because some of the kids who tried Grade 8 in a mainstream high school, they fail a lot of the courses. In our schools it’s more self-paced, and they get more individual support and they feel welcome and safe as a native person,” she says.

In order to qualify for UNYA’s programs, the student’s family must have a file open with the Ministry of Children and Family Development, attracting unwanted attention for Aboriginal families, who are over-represented in children in care in this province.

It’s not the only option for struggling Aboriginal kids in Vancouver, however. The VSB runs four alternative programs for youth in Vancouver who are struggling to complete high school and earn their Dogwood Diplomas. Although they’re not aimed specifically at Aboriginal people, they do address many of the needs Aboriginal youth have by letting students go at their own pace. As well, youth and family workers and clinical therapists are on hand to help deal with issues beyond the classroom.

“Aboriginals have a higher level of need through academics and through social and emotional independence. I don’t want to alarm anybody, but it’s significant, and we have to ask ourselves why starting at that early age, with respect to that wraparound service, involving family, involving academics, involving social-emotional supports, is it huge,” says Steve Agabob, district principal of Aboriginal education for the VSB.

Six alternative programs haven’t been enough to buoy up Vancouver’s Aboriginal graduation rate, however, leaving parents, educators and community groups calling out for a change. That change is set to come this fall in the opening of Vancouver’s first Aboriginal focus school.

Modeled after similar schools in Prince George and Edmonton, the focus school will be open to all students but will feature curriculum and school policies that incorporate Aboriginal culture, history and beliefs along with Ministry of Education academic standards. Currently in the development stages, the school board is consulting with an Aboriginal advisory committee on the location, age range and curriculum of the school.

But a focus school is not the solution for every Aboriginal student, or their parents, some of whom fear such a model promotes segregation, and the idea that non-Aboriginal students don’t need to learn about Aboriginal issues. Agabob says that’s not what the district believes.

Despite recent VSB progress in paving the way for Aboriginal focus schools, it’s too late for Varley to go back to high school. He’s not the only one: according to BC Stats, over 20 per cent of off-reserve Aboriginals in B.C. ages 25-54 didn’t have a high school diploma in 2010.

But although he’s too old to go back to high school, Varley is one of 6,000 to 8,000 people every year who take adult basic education courses at one of the six adult education centres run by the VSB. Unlike K-12, the schedule for adult education students is flexible to help balance their priorities of work, school and family.

“Some people might take a morning course because they work the rest of the day, particularly students between 19 and 25 who are working jobs in the service industry as they’re upgrading. They can take structured courses and they can take what’s called self-paced, where they’re basically given some oversight as they work through the course of study, but they don’t attend regular classes,” says Maureen Ciarniello, an associate superintendent at the VSB.

Varley has entered the self-paced track at least twice, but struggled to keep up when work got in the way. He won’t go the regular, in-class route, saying it’s too rigid a schedule for someone who has several volunteer and under-the-table work commitments.

“I need something that can be in flux, that can be changed, that can be dynamic. Because I can’t sign up for a rigid structure if I don’t even know what I’m doing next week,” he says.

Varley’s not too worried, though, about getting his high school diploma or post-secondary education.