join us donate
LOG IN or SIGN UP
Liquid syntax error: Error in tag 'subpage' - No such page slug join
find a vendor
March 08, 2012

Alcohol harm reduction on the map: At Long Last, Illicit Drinkers Become Part of the Conversation 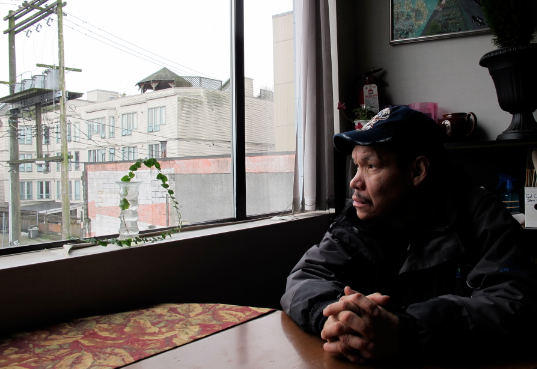 In the final part of our series exploring drugs, policy and harm reduction, Jackie Wong looks at how Vancouver has begun to experiment with harm reduction for alcohol addictions.

Thirteen years ago, John Skulsh was sitting in the Balmoral Hotel pub by himself, drinking a beer. A social guy with a sweet disposition and a goofy sense of humour, Skulsh was looking for company. “I had nobody to drink with,” he says of that time. “Then, he walks in.”

Rob Morgan walked through the doors and sat down next to Skulsh. That day in the pub, the two traded stories about their hometowns in northwestern B.C., which they quickly discovered were only a short distance from each other. “We hit it off just like that,” Skulsh recalls, smiling.

These days, Skulsh and Morgan are almost inseparable. They both live in the Washington Hotel supportive housing facility, they share a similar group of friends and they still drink together. But their beverage of choice has changed since the Balmoral days. “We got short of money,” Skulsh explains, simply. “So he introduced me to the cheap stuff.”

It’s now been eight years since Skulsh started to routinely drink diluted Listerine. At $7 a bottle these days, it’s much easier to come up with money to buy mouthwash over beer or wine.

“Not in my wildest dreams did I ever think I’d ever consume that substance,” Skulsh says. “There are days I say no, and there are days that I don’t know how to get out of it.”

He has mixed feelings about his habit, but Skulsh maintains there’s “no way” he’s going to detox, treatment or Alcoholics Anonymous. “It’s not in my vocabulary,” he says. To engage in such programs would require him to cut himself off from the people he knows best. “I feel like I’m going to miss out on stuff. Miss out on good times, miss out on friends.” The potential loss of a community that means so much to him in exchange for the questionable effectiveness of an abstinence-based recovery program would be too great a risk to take.

Skulsh is one of many people who drink illicit, also known as non-beverage, alcohol, but for whom there are few social or health supports available. It’s only been in the last seven months that Skulsh has started to connect with a community facing similar addiction issues.

While numerous support groups have previously existed for crack and heroin users, illicit drinkers have been largely left out of public health conversations around harm reduction and marginalized populations until recently.

The consequences of abuse

On three Monday mornings a month, Skulsh, along with other members of the seven-month-old Eastside Illicit Drinkers Group for Education (EIDGE), gather in the East Hastings Street headquarters of the Vancouver Area Network of Drug Users (VANDU) to connect with each other and hear from guest speakers about how to improve their health and safety while drinking.

The goals of the group are relatively simple: to educate members on how to improve their own health and provide an open discussion forum for people who drink non-beverage alcohol.

Non-beverage alcohol addiction is an intersecting outcome of poverty and longstanding addiction. Illicit drinkers form a marginalized subset of the already-marginalized population of people who are homeless, vulnerably housed or have a history of other illicit drug addiction.

It’s a well-documented fact that alcoholism affects a large percentage of the homeless population. The Canadian Medical Association Journal shows alcoholism has been reported to affect 53 to 73 per cent of homeless adults, with a high frequency of people who drink more than 20 drinks a day.

But there’s been relatively little movement on improving health outcomes and reducing harms for alcoholics using the harm reduction framework that has proven effective with illicit drug users. As such, the formation of a user-run group like EIDGE has been long overdue, according to Skulsh’s friend and group co-founder Morgan.

“There were a lot of people out there who were missing the boat,” Morgan says of people embroiled in non-beverage alcohol addiction. “They aren’t getting harm reduction that other groups are getting, like drug users or heroin users.” 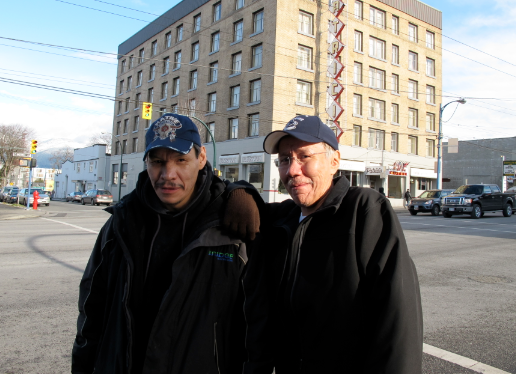 EIDGE started in August 2011 with a small research grant from the BC Centre for Disease Control (BCCDC) to investigate what harms illicit drinkers perceive from their drinking and to learn what could be done to minimize those harms. That funding kicked in after the BC-Yukon Association of Drug War Survivors conducted a provincial needs assessment supported by the

Results of the needs assessment, which gathered information from 17 B.C. communities, were published in May 2011. The assessment identified the need to more strongly connect with illicit drinkers, and direct more support towards user-run organizations. EIDGE aims to accomplish both goals. Starting in February, the Vancouver Foundation financially supports the group with a $51,980 grant that will help it explore alcohol harm reduction options across B.C.

“What we’re doing is teaching members how to live a healthier lifestyle while they’re drinking,” says Morgan. “That might include just having a soup in the morning or seeing a doctor. We’re really trying to stress our members to start seeing doctors, which they’re not.”

Illicit drinkers are routinely refused health services because of their addiction, and Morgan and EIDGE members are trying to address that in their group. “They smell of alcohol and they’re refused services from the health centres around here,” Morgan says. In northern B.C. communities, some homeless shelters have policies that bar people from the shelter for a week if they arrive visibly intoxicated. “That’s out in the cold. That’s really bad.”

Like most of the members of EIDGE and the illicit drinkers identified in the initial BC-Yukon Association of Drug War Survivors needs assessment, Morgan is an aboriginal man with a history of addiction. Now 48, he started drinking at age 11, and started drinking nonbeverage alcohol in the 1990s.

Morgan has personally experienced discrimination for his illicit alcohol addiction. “People just give you that look,” he says. “‘How can you do that? How can you drink that stuff?’”

For Morgan, the answer is simple. “Because it’s cheap. You get more bang for your buck than you do for regular beer. It just helps you forget your past, you know. People are running from their pasts and that’s what they’re drinking this for. ’Cause it forgets. Everybody wakes up with their demons. They’re staring at their face. And they reach out for that drink just to hide it.”

Stigmas attached to illicit drinkers have deterred Morgan from seeking help from mainstream groups like Alcoholics Anonymous. “I tried AA in the past and went to all types of AA meetings, whether they were Native, non-Native or two-spirited [mized gender],” he says. “I could not seem to fit in because I was not an official alcoholic by what I had chosen to drink. Even in AA they still have that ‘I would never drink that’ attitude, so I always felt unworthy and like an outsider.”

Morgan doesn’t think that Alcoholics Anonymous would support a group like EIDGE, but EIDGE is hoping to expand its presence in the Downtown Eastside community by eventually opening an Insite-style safe drinking lounge. A location and program details have yet to be determined.

EIDGE started its first meetings in the same month that PHS Community Services Society launched its own Managed Alcohol Program (MAP) in partnership with Vancouver Coastal Health and University of Victoria researchers. The program, which operates out of PHS’ Station Street supportive housing facility near Main Street SkyTrain Station, is Vancouver’s first in a long-term, permanent residential setting. A smaller, less formalized managed alcohol program has run out of PHS’ Pennsylvania Hotel since 2009.

PHS’s MAP program serves eight of Station Street’s 80 residents. The program costs approximately $350 per person per month. PHS staff approach the program like any other form of substitution therapy, such as methadone treatment for heroin users.

Every hour for 12 hours a day, PHS nursing staff members administer measured single servings of beer, wine or vodka to MAP participants who have a history of illicit alcohol misuse.

“It was very clear that they needed a program that worked for them. They were failing at abstinence-based programs,” says Station Street projects manager Clare Hacksel, who helped develop the MAP at PHS. “They were failing at sobriety, with long histories of drinking—on average, 20 to 30 years for most of our participants. And so it just seemed like the time was right.”

Since a large part of drinking is its social elements, MAP was developed with the community in mind, and the hourly dispensing sessions at Station Street allow people to remain with their peers while having access to health and social supports.

The program has raised the ire of some critics in the media, who interpret MAP as a misguided dispensary for “free booze,” not a step on the road to addiction recovery.

There is a raft of popular misconception surrounding alcohol addiction that doesn’t tend to exist for other drugs, Hacksel says. “People understand other addictions as out of people’s control,” she explains. “But with alcohol, people—even affluent people—tend to think, ‘Why can’t they just get it together? I know a high-functioning alcoholic. I drink wine every day.’ They don’t get that it’s not the same thing. And that people really struggle with it.”

Despite its relative newness and some accompanying skepticism in Vancouver, managed alcohol programs have thrived elsewhere in Canada for years. The PHS managed alcohol program is modeled after a similar program in Ottawa, Ontario. There, the Shepherds of Good Hope hostel ran a robustly evaluated managed alcohol program for 18 months starting in 2001, on the heels of a pioneering program at Toronto’s Seaton House. The Toronto program began in 1996 in response to a coroner’s inquest into the freezing deaths of three people who were homeless and in the throes of alcohol addiction.

Hacksel emphasizes what many critics forget: that poverty and chronic homelessness are central to the experiences of illicit drinkers. Treatment or detox doesn’t often work for people in poverty because traditional treatment programs don’t address housing needs or social supports for clients after they finish the programs.

“It’s pretty quick to go back [to drinking] if that [housing] situation hasn’t changed. Wrapped up in this program is trying to address homelessness,” she says.

“Getting to the point where you’re drinking rubbing alcohol or Listerine—you didn’t just pick it up one day. It’s a pattern, and reversing that pattern is very difficult. There’s so much more involved in drinking it than simply wanting to have a drink.”