join us donate
LOG IN or SIGN UP
Liquid syntax error: Error in tag 'subpage' - No such page slug join
find a vendor
September 19, 2011

All That Jazz: Carnegie Jazz Band makes beautiful music together 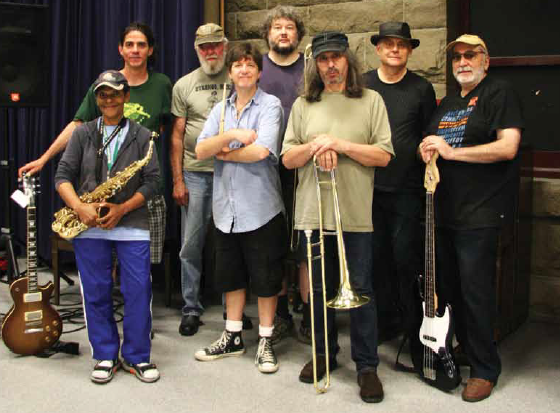 It is the middle of Vancouver’s short but glorious summer weather, yet the members of the Carnegie Jazz Band look perfectly content to be missing the rare sun to play indoors.

I slip in for the last hour of their weekly practice, but there’s no sense that the energy of the eight musicians is waning. Instead they are applauding one another’s solos, cheering, suggesting songs in turn and playing them with exuberance.

At the helm is Brad Muirhead, teacher and trombone player, gently guiding a practice that looks more collaborative than instructive.

“I try to go in with a plan every week,” says Muirhead, over coffee. “And three minutes after I’ve been there, I’ve had to change the plan.” He laughs. “It’s good for me—it’s taught me a lot about teaching, because I’m improvising all the time.”

The Carnegie Jazz Band is a project of the Carnegie Centre (located at the corner of Hastings and Main), a drop-in music program with a core group of 13 or 14 players that represent a wide range of ages, experience levels and technical abilities. Practices are held every Saturday from 11:30 a.m to 2:30 p.m., and open to anyone in the community.

Since Muirhead took over teaching duties from local musician and activist Earle Peach four years ago, the Carnegie Jazz Band has grown from a community project into an accomplished group of musicians with a reputation that extends beyond the Downtown Eastside.  They have played the Vancouver Jazz Festival and the Heart of the City Festival, and recently performed at the Government House to a standing ovation. 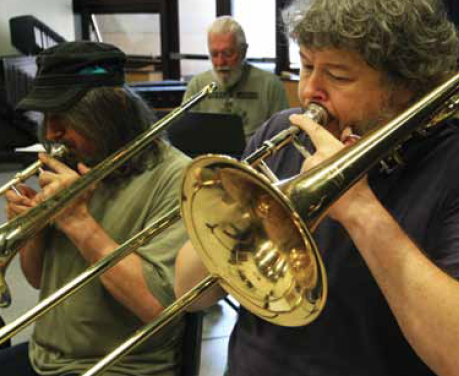 When Muirhead first stepped into the role of teacher, he recalls, “It was just me and four horn players.” The experience of the members was wildly diverse and the band had neither structure nor stylistic direction. “Not only was it not jazz,” says Muirhead, “there wasn’t much going on. So I slowly worked it towards what you could loosely consider to be jazz.”

Muirhead has a definition of jazz that is more experiential than technical, which is helpful when talking (as he is) to a stranger of the genre. “To me, jazz means improvisation and musical exploration, as opposed to playing a certain style and beat pattern. If it doesn’t have those elements, I say it’s not jazz.

“So I started by trying to teach them a little about the B-flat blues scale, and how to move around within that scale, making it up as you go,” he explains. “And once you can improvise on that, you can play any blues in B-flat. And that meant there was already right away half a dozen or so tunes we could play. That slowly opened people up to the process.

“To me, jazz isn’t a thing, it’s a process an activity that’s never finished.”

Improvisation allows each player a chance in the spotlight.

“Being able to improvise to some people is liberating, to others is really daunting. You get the same feeling that you get when you get off of the roller coaster. It’s almost an existentialist rush, with no real physical danger. Only psychological danger. 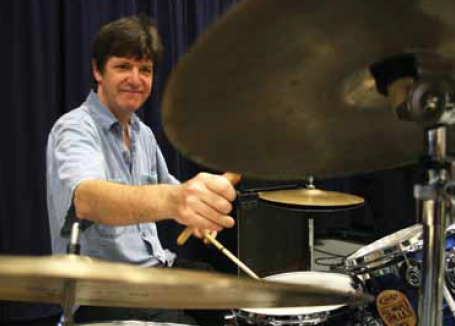 After struggling to find a way to keep both the seasoned musicians and the beginners engaged, Muirhead added a theory class to each practice. “We do beginner jazz theory, and spend time on simple things to get everyone into the basic concepts to apply scales and chords, general musical concepts.”

This allows the beginners a chance to catch up with the skilled players, but also provides musical education for everyone—many of the experienced members, even those who have played for decades, are self-taught.

As the band took shape, other players were drawn to the musical maelstrom. “Once we started playing jazz tunes, other people started poking their heads into the room. We started getting people who could play other instruments and gradually attracted other people that completed the ensemble.”

It sounds straightforward to hear Muirhead describe it, but it’s hard to believe that such an accomplished band could emerge from a group of musicians as diverse in skill and background as this one, particularly because they meet only once a week. For many, the practice is the only time each week that they spend with their instruments. Add to that the constantly changing line-up—players come and go or drop in for a few practices before disappearing—and it’s easy to imagine the band devolving into endless challenges and frustration.

But the opposite is true: everyone I talk to has nothing but glowing things to say—about the band, their experiences and one another. They’ve grown consistently. Part of the magic is Muirhead himself. At the end of the practice, each members I speak to as they pack up their instruments mentions with candid sincerity what a wonderful teacher Muirhead is. Ken Tabata, a security guard at Carnegie, started playing guitar with the band when Muirhead took over.

“I could tell when Brad got here that things were going to happen fast,” says Tabata. 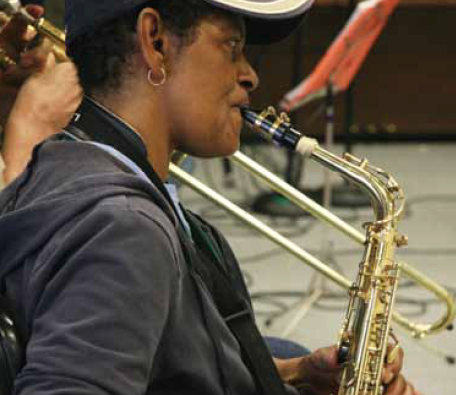 Tegan Ceschi-Smith, a violinist and music education graduate student who joined the Carnegie Jazz Band in January 2010, came to watch one day and stayed for the warmth and community she felt.

“The way Brad approaches teaching, the way he approaches the band as fellow musicians, and how he and everybody keeps that a very safe space—that’s really special. I find it attractive as a musician to be able to play in a safe space like that, where everyone really encourages each other.”

The word “special” is invoked often to describe the atmosphere at practices—both by Gary, a drummer who has been with the band for a year and a half in his 40 years of playing, and Rob McDermott, a singer who works in the DTES as a residence assistant. “I heard about the band and came to check them out one day,” says McDermott, who takes a break to join me as I watch the practice from the back of the room. “I thought they would be amateurish, but I was surprised that they were good. Really good.”

The level of respect and warmth present among the band members is rare in musical projects.

“Regardless of where or who you are playing with, that just doesn’t happen often.” says Ceschi-Smith, “That’s what’s really kept me there.”

“That’s not only this group,” agrees Muirhead. “That’s Carnegie.

It’s a tremendously supportive community. People help each other out. I’ve never seen anything quite like it.”

Despite the cohesion of the group and their tight-knit community vibe, the underlying principle of the band remains the same: anyone is welcome. If you’ve ever wanted to play jazz, or just sit back and listen to an amazing group of musicians, the opportunity is there—any Saturday at Carnegie Community Centre.

Megaphone is a non-profit organization that depends on donations to help our homeless and low-income vendors who sell the magazine on the streets of Vancouver. Please make a donation today.