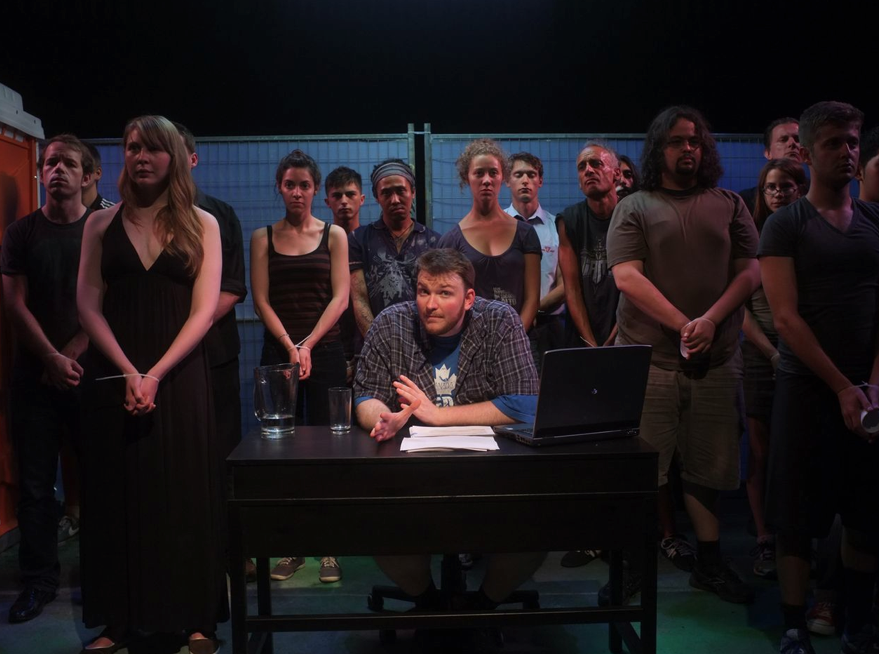 Photo by Will O'Hare.

Playwright Tommy Taylor had never been to a protest demonstration until Friday, June 25, 2010, the week of the G20 summit in Toronto. The next day, in the largest mass arrest in Canadian history, Taylor was among the more than 1,000 arrested. After his release, he posted an 11,000-word account of his experience on Facebook, where it went viral. Now he’s turned his story into a one-man show called “You Should Have Stayed Home—A G20 Romp.”

Before the arrests, Toronto Star staff reporters Amy Dempsey and Wendy Gillis wrote on Monday, June 21, 2010 that “bike cops are stationed on every corner of Allan Gardens and swarms of journalists eagerly await the G20’s first demonstration.” The week had been calm, except for minor antagonistic banter between protestors and police.

On Friday, June 25, Taylor noticed a tent city in Queens Park across the street from his apartment. Curious, he walked through the peaceful-looking park.

A grandmothers’ march on behalf of children dying of AIDS caught Taylor’s attention. His sympathy aroused, he said, “I felt moved to take part as a responsible global citizen” in the 15,000- to 20,000-strong “beautiful protest.”

According to Taylor, on Saturday, June 26, protestors were singing in the Free Speech Zone in Queens Park, approximately two kilometres away from the protest zone. Allegedly, 20,000 “intimidating police officers in riot gear” surrounded Queens Park. Protestors playfully chanted, “You’re sexy / You’re cute / Take off your riot suit.” The sights and sounds buoyed Taylor so much he called his girlfriend to watch.

What happened next was, according to Taylor, “surreal and intimidating.” Riot officers blocked off both ends of the street without warning, came forward in a semi-circle, pushed some 200 people against a wall and, in pairs, began putting plastic cuffs on protestors and observers alike.

Taylor was detained in a cell, meant to hold 15 or 20 people, with 40 other men for 24 hours without being charged or allowed legal counsel. Port-a-potty doors were removed. Women using the portable toilets were watched by the police. Toilet paper was not supplied. Those jailed were left in handcuffs, so that after using the toilet, they had to wipe each other. Neither food nor drink was available. Taylor passed out from dehydration.

Taylor is not anti-police. He has seen Toronto police behave heroically and believes that on this occasion their “leadership failed them.”

The unaccountability of leaders, the abuse of power and the manipulation of information compelled Taylor to share his personal story. In his play, he is careful “never to tell people what to think.” Up until that fateful Saturday, Taylor said he couldn’t have foreseen a “more un-Canadian scenario.”

You Should Have Stayed Home opens at the Firehall Theatre September 24 with shows until October 5. Visit FireHallArtsCentre.ca for showtimes and tickets.