join us donate
LOG IN or SIGN UP
Liquid syntax error: Error in tag 'subpage' - No such page slug join
find a vendor
June 18, 2020
by Paula Carlson follow this author
photos: Let’s End Homelessness Together is a mural on East Hastings Street near Jackson that features three panels of comic-style artwork by Sean Karemaker, based on a poem written by late Megaphone vendor Ron McGrath.
feature

Art has the power to change things 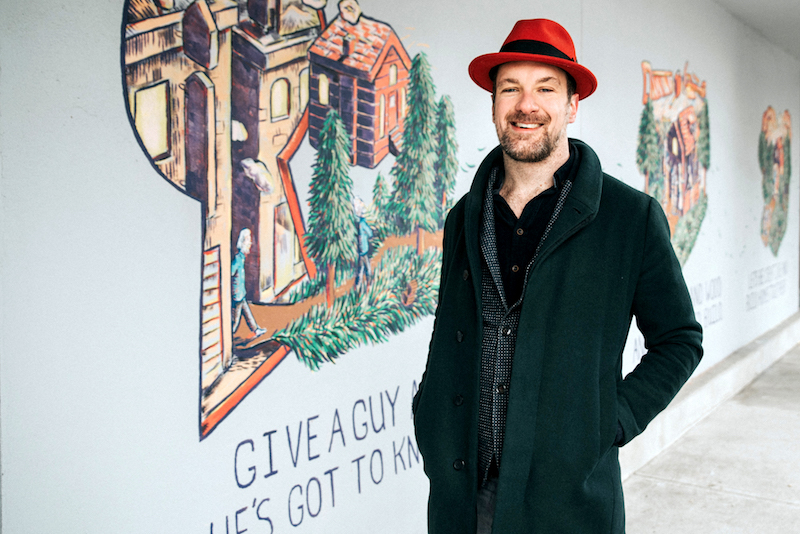 Artist and graphic novelist Sean Karemaker (above) has created a mural based on a poem written by late Megaphone vendor Ron McGrath (pictured below). Karemaker wants to encourage more people to talk openly about homelessness and poverty. Melanie Graham-Orr Photography.

Much like accessing safe, affordable housing in the Lower Mainland, in order to fully appreciate the new murals that have taken shape on the walls of Jennie Pentland Place, the social housing society located there, you’ll have to get past the barriers.

Once you do, you’ll be treated to a heartfelt and homegrown creative collaboration—one inspired by a much-loved Megaphone vendor and brought to life by a talented local artist and graphic novelist.

Let’s End Homelessness Together is a mural that features three panels of comic-style artwork by Sean Karemaker, based on a poem written by late Megaphone vendor Ron McGrath, who died in 2017 of pancreatic cancer.

McGrath, who gained a loyal following of customers after joining Megaphone in 2009, was a passionate advocate for social justice—particularly around housing. He was homeless for about seven years and he often spoke about the frustration of it, and what he believed a peaceful home could mean for someone’s well-being and how everyone deserved that. 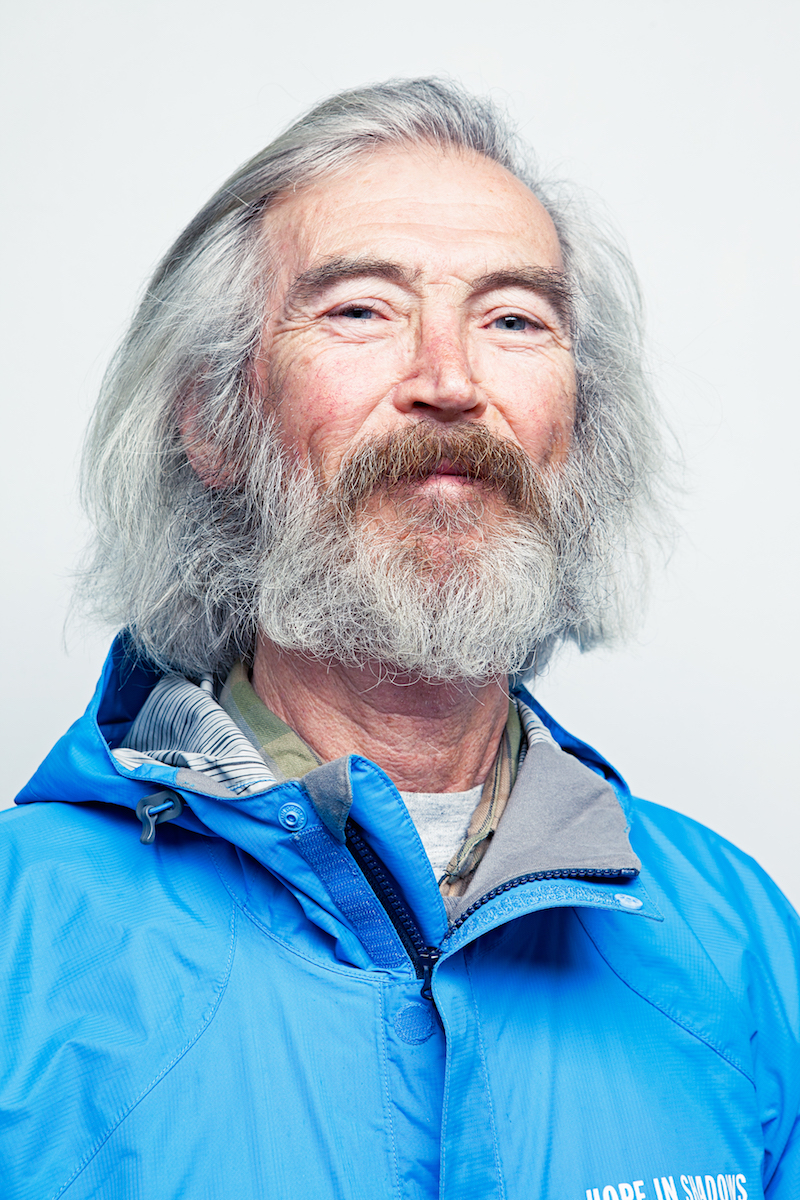 When he was finally able to access housing after years on the streets, he stayed vocal about ending homelessness—and specifically about finding housing options for people for whom traditional supportive housing or shelters don’t work. He often wrote beautiful poetry about his beliefs and his experiences, including Let’s End Homelessness Together.

“While he was alive, I helped him illustrate a little card he used to give out on the street,” says Karemaker, who met McGrath at one of his art shows. “I felt it was fitting to do something with that poem.”

Karemaker’s work, too, has been shaped by a keen awareness of both the love and hardships served up by life.

In his graphic novel, Feast of Fields (2018, Conundrum Press), Karemaker explores the picnics he took with his mother in the fields of his elementary school. The book is an illustrated biography of his mom, who grew up in Denmark in an orphanage because her mother suffered from paranoid schizophrenia. The book touches on themes of immigration, poverty, motherhood and mental illness.

In an intricate example of how his form of storytelling works, Karemaker constructs the graphic novel through a series of scrolls, densely illustrated and then cut up to make the pages of the book—creating a unique visual and narrative experience.

“My goal as an artist is to encourage empathy and self-expression with my storytelling,” he says. “I strive for my output to be both aesthetically pleasing and emotionally deep.”

Feast of Fields won the first prize at the Alcuin Society Awards 2018 and was featured in the CBC’s list of best Canadian graphic novels.  Karemaker’s debut graphic novel was The Ghosts We Know (Conundrum) and since its release in 2016, the artist has also painted the walls of Vancouver General Hospital, exhibited around Canada and was a featured artist at Vancouver International Airport.

To see his latest project, one needs to venture no further than 540 E. Hastings St., where Let’s End Homelessness Together lives. The mural features some out-of-the-box ideas for housing people and is based on McGrath’s poem of the same name:

Give a guy a home.

He’s got to know where to go.

Don’t give him money.

Money is no good.

He needs a home.

Give mortar and wood

and the tools to build.

Also, give him a hand and

your friend's hand too.

Let’s be creative and

They don’t have to be in the city.

They could be where the deer roam.

Karemaker’s mural is funded by the BC Arts Council and the Vancouver Park Board. The next step will involve installing a plaque to hang near the mural describing McGrath and elaborating  on his ideas.

Karemaker notes that individuals and businesses are often afraid to present difficult topics in public places.

“It took me six months to find a wall [to host Let’s End Homelessness Together],” he says, adding the reluctance is indicative of a widespread problem.

“When I was looking at a lot of the murals that were going up around the city—there are beautiful murals as part of the mural festival—it seemed to me that none of these murals were talking about homelessness, at least not in a direct way,” he says. “What we need to do as a society is start to accept that it’s not just a problem of the government... it’s a problem that should be talked about among everyday people.

“I think as a society we’re kind of passing the buck. Most people in Vancouver are living a pretty opulent lifestyle, or at least living comfortably, and I think a lot of us are kind of avoiding this topic—maybe just out of discomfort, or misinformation. There are a lot of other countries where there is a lot less means and people wouldn’t allow this type of poverty to occur. I think [the perception of homelessness] needs to change on a person-to-person level, not just on a government or infrastructure level.”

Karemaker acknowledges homelessness is a complex challenge, but he’s committed to doing his part.

“For me, art has the power to change things,” Karemaker says. “It can start a conversation.”

He aims to encourage those dialogues through his unique methods of storytelling.

“Some of my scroll comics are 30 feet long… many of them are six-foot-long story scrolls,” he says. “I’m currently working on adapting those stories to virtual reality—it’s an unusual way of making comics.”

A virtual reality comic is just like it sounds: “You wear a headset and you’re basically in the middle of the artwork, you’re surrounded by all the drawings, you’re kind of immersed in it,” he explains.