join us donate
LOG IN or SIGN UP
Liquid syntax error: Error in tag 'subpage' - No such page slug join
find a vendor
February 13, 2013

B.C.’s homeless death toll: Why are so many people dying on our province’s streets? 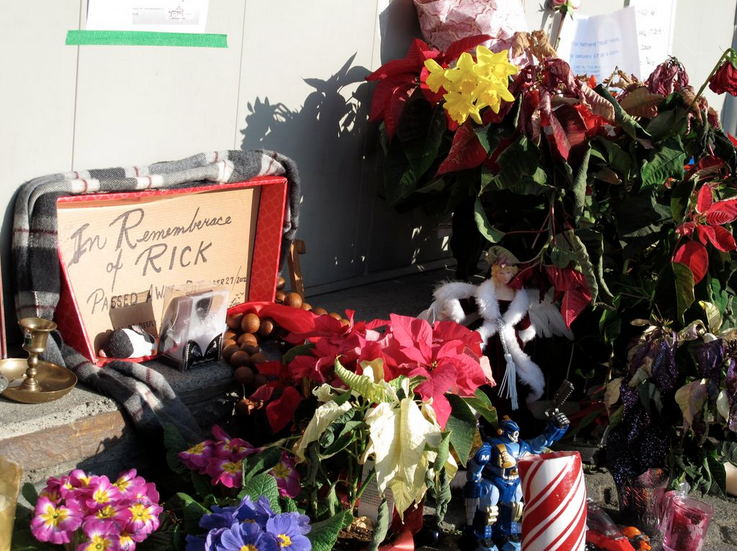 A makeshift memorial for Rick Hofs. Photo by Jackie Wong.

It was one of the bright, cold days in early January when Lenlen Castro met me in Marpole to show me the memorial displays she and her neighbours put together in memory of Rick Hofs. The 49-year-old man died December 27, 2012 behind the dollar store at 70th and Granville after spending the last five years of his life living on the streets of the south Vancouver neighbourhood.

On the morning of my appointment with Castro, yet another Extreme Weather Alert (EWA) had been issued for Vancouver, marking the second in as many weeks. The sub-zero temperatures that month had homeless advocates concerned that the winter weather would put homeless people in danger.

Under the 2009 Assistance to Shelter Act, a Vancouver community representative can call an EWA during periods of extreme winter weather that could threaten the health and safety of a person sleeping outside. The EWA program also opens additional temporary shelter space throughout the community and activates the Assistance to Shelter Act. The Act grants police the capacity to assist a homeless person to a shelter during extreme weather conditions. Once the person is in the shelter, the choice is his or hers to stay.

According to friends of the man who died only steps away from a Marpole extreme weather emergency shelter, Hofs was not likely to act on another person’s urgings to find him a place to sleep indoors. He, like many who live on the streets for extended periods of time, refused to go inside.

As was apparent by the tremendous and emotional turnout at the Marpole memorial service for Hofs January 17, the man was widely loved. But many, including Castro, felt like they were at a loss for what they could do for him beyond offering their friendship and what personal resources they could.

Castro remembers Hofs’ health declining over the last months she knew him. “The last time they released him from the hospital, he was definitely sick,” she says. “The last time I saw him, he had just come out of the hospital. He reached into his bag and took out a gift for my daughter. I helped him with his blankets, laying them down for the night. I said, ‘Don’t worry, I’ll be back.’”

She’s still reeling from the loss of a person she considered a friend. And she wishes that she—and the community who cared about him—could have done more to keep him well. Hofs had struggled with alcohol addiction and related health concerns, like seizures.

“He had difficulties,” Castro says. “But in his time of need, where were we? How he died was so sad, hearing how he was still in turmoil.”

Police have determined that Hof’s death was not suspicious. The BC Coroners Service is still investigating how he died.

The leading means of death among homeless individuals is poisoning related to alcohol or drugs, according to the Coroner. Alcohol and drug-related deaths count for 29.8 per cent of deaths among homeless people, followed by the hard-to-pinpoint “natural disease” (22 per cent), and then, by a wide margin, “motor vehicle incident” (sic), at 7.7 per cent. This information is supplied in the BC Coroners Service fall 2012 report on deaths among homeless individuals between the years 2007 and 2010. It’s the only publicly available information that tracks homeless deaths over time and looks at how people died, where they died, their demographic information and average age.

But homeless advocates say the report doesn’t fully represent the homeless population, nor does it consider the more fluid, nuanced nature of the homeless experience.

Bernie Pauly is a registered nurse and a scientist who teaches in the University of Victoria’s School of Nursing and works as a scientist and researcher for the Centre for Addictions Research of B.C. (CARSBC). Her research frequently sees her collaborating with community organizations that work with homeless populations.

“When you’re doing work in homelessness, you’re constantly bumping into the fact that the people you know and encounter in your research are dying,” she says. On the Coroner’s report on homeless deaths, “it just doesn’t show the scope of the problem and the reasons,” she says. “It doesn’t capture, in my mind, many people who would have been homeless maybe off and on through their life, or who have died because of the consequences of living in such extreme poverty for longer periods of time.”

Pauly adds the Coroner’s reporting on homeless deaths is a reflection of a subset of the homeless population, not the whole. The BC Coroners Service uses a definition of homelessness that captures people living on the street (what the report describes as the “street homeless”), and those who are staying in emergency shelters or another short-term housing situation, such as staying with friends, family, or in a safe house for youth or families (what the report refers to as “sheltered homeless.”) It also retrieves cases from the BC Coroners Service database if “no fixed address” or the word “homeless” is provided.

To Pauly, this method of counting homeless deaths does not adequately capture the whole homeless population.  “It doesn’t reflect the scope of the problem,” she says, adding that many homeless people will use a friend’s address or the address of a drop-in agency to avoid the stigma around homelessness.

“In the Canadian Definition of Homelessness and those at risk of homelessness, one of the things we know is even when someone’s housed, if they’ve been homeless most of their life, they’re at the same kind of risk of death. So there are many, many people who would never get into this definition that the coroner uses.”

The Canadian Homelessness Research Network (CHRN) released the new Canadian Definition of Homelessness in September 2012. The CHRN defines homelessness as a spectrum representative of a variety of vulnerable housing experiences.

The CHRN definition includes people who are unsheltered, in emergency shelters, provisionally housed and at risk of homelessness. The BC Coroners Service captures only two of those four categories in its report. However, the report does include a note stating, “this report represents all cases identified via this method but may not be an all-inclusive list.”

The real cause of death

Despite its limitations, the Coroner’s numbers reflect some realities of people living on the streets. In the years counted on the report, 85.1 per cent of all homeless people who died and were captured in the Coroner’s report were male; 62.5 per cent of all who died were living on the street; and 91 per cent died between the ages of 20 and 59, earlier than the general population.

Vancouver was the site of the largest number of homeless deaths between 2007 and 2010, with 45 deaths reported. Victoria, a much smaller city, followed Vancouver, with 25 deaths. And Surrey, larger than Victoria by more than 100,000, had 15 reported deaths.

The 2012 surge in Victoria homeless deaths—three times the usual rate, at about 30 homeless fatalities for the year—was not captured in the Coroner’s report, which includes data up to the year 2010. But searching for causes fails to get at the root of the problem, Wynn-Williams says.

“It could be kind of comforting to say, ‘Oh, it’s a run of bad drugs that are kind of killing these people.’ It would be kind of an excuse for us to put the blame somewhere other than on ourselves as a society,” he says. “These people are dying because being homeless is a very, very difficult life.”

The solution, he adds, is not to look at the Coroner’s report and identify gaps in services. “The solution is to end homelessness. Homelessness is caused by lack of affordable housing and low incomes; it’s when someone’s personal circumstances interact with the economic situation overall.”

Victoria, like Vancouver, is an expensive place to live. “We have quite an expensive city and people with lower incomes really can’t afford to live here,” Wynn-Williams says, echoing a familiar local refrain on Vancouver’s lack of affordable housing. “The greatest challenge we face is two things: one is the lack of affordable housing that’s just plain housing that people with low incomes can live in. And the other is lack of supportive housing.”

Mayor Gregor Robertson built much of his successful first 2008 mayoral campaign around the death of Darrell Mikasko, a homeless man who burned to death trying to keep warm after being turned away from a Kitsilano shelter. Later that year, after Robertson was elected mayor, the first Homeless Emergency Action Team (HEAT) shelters opened on the heels of the December death of a woman known as Tracey. She had settled down for the night near Hornby and Davie streets as the temperature dropped to -8 C. The wind chill had it feeling more like -13 C. Tracey was sitting in her shopping cart when she became engulfed in flames after lighting a candle to try to stay warm. The following year, in July 2009, Curtis Brick died in Grandview Park near Commercial Drive on one of the hottest days of the year. And then there was the recent death of Rick Hofs. His last days coincided with a cold stretch of weather in Vancouver.

So while emergency winter shelters do provide a critical service, the Coroner’s report does not indicate that shelters fully prevent winter-weather deaths, especially among those who, for a host of reasons, choose not to go indoors. Also, the report shows that poisoning related to alcohol or drugs, natural disease, car accidents and falls are the leading causes of death, not exposure to heat or cold. In fact, exposure to the cold accounted for just three per cent of homeless deaths in the Coroner’s report on homeless deaths between 2007 and 2010. And 1.2 per cent of deaths were caused by exposure to the heat.

The BC Coroners Service has previously reported that a homeless person dies every 12 days in this province, and figure that doesn’t capture the population who have been homeless at one point or another, but are housed when they pass away.

“Being exposed to the cold makes you more vulnerable to other things. Your health decreases quite significantly when you’re homeless. You’re much more vulnerable to all kinds of things,” says Wynn-Williams. “Looking at the chart [on the Coroner’s report], you might say, ‘Oh yeah, that guy died of exposure,’ whereas if somebody is on the street one night and catches pneumonia and died, that’s probably exposure, too. But it would be listed as an illness.”

Despite campaign promises from Mayor Robertson to end street homelessness by the year 2015, it’s clear that Vancouver is a long way from solving the problem. A January 13 press release from the mayor’s office showed the City of Vancouver’s four temporary winter shelters had to turn people away 893 times since they opened in early December.

Since 2005, the total number of homeless people counted in Vancouver’s annual homeless count—widely understood as an undercount—has grown faster than Vancouver’s general population.

According to the latest 2012 homeless count, 1,602 homeless people were counted. Unsheltered homeless jumped to 306 from 154 in the 2011 count. And the 2012 count indicated Vancouver’s homeless are in poorer health today than in any previous year.

Back in Marpole, Castro looks to the spot where Hofs used to spend his days. Their friendship changed her; she is now volunteering with homelessness awareness groups in Vancouver and is eager to learn more about how to work with the homeless population.

She remembers Hofs feeling self-conscious about his addiction, wanting to get out of it, but unsure how to proceed. “I knew he didn’t want to go to a downtown shelter because of the drugs there,” she says.