join us donate
LOG IN or SIGN UP
Liquid syntax error: Error in tag 'subpage' - No such page slug join
find a vendor
August 13, 2015

Back to the land

Drive 25 minutes north of downtown Victoria, and you’ll find a remarkable 193-acre farm. This place differs fromthe surrounding farmlands of Saanich because it’s the site of Woodwynn Farms, an organic farm and therapeutic community that works with people experiencing addiction and homelessness.

Woodwynn offers its services free to anyone who is serious about changing their life. Established in 2009, the farm’s mission is “to enfold homeless people back into community by giving them the support and the tools needed to reclaim their self-worth.” Participants, who are advised to take part in the program for a year, can stay for three months or three years—however long it takes before they are ready to leave.

The farm is all about connecting: to self, to others, and to the land. The holistic model focuses on a structured daily routine with healthy lifestyle features woven together.

A typical day: yoga at 5:45 a.m., breakfast, morning meeting and check-in, farm work, lunch, continued farm work, dinner, and free time. The idea is that by meeting people’s basic needs for healthy food and safe shelter, individuals can work towards healing in all parts of their lives. When people are ready to leave, they’ll have learned how to grow food, shop, and cook for themselves.

Woodwynn is not alone in its approach. It’s similar to San Patrignano, a large-scale therapeutic community in Italy that has run since 1978 and treated over 25,000 people. Proponents of both farm programs perceive more positive outcomes than traditional addiction services programs, with San Patrignano stating program participants have an “independently verified drug-free success rate of over 70 per cent.”

Successful graduation from the Woodwynn program is achieved when the participant, their peers, and the program leaders all agree that an individual is ready to leave. Often interested in returning to Woodwynn in some capacity, individuals must remain sober for a year after leaving before they can return as a volunteer or mentor. In the six years of its operation, about half of the 35 participants have achieved at least the one-year goal.

Currently the farm only has two individuals in the program, but there is room for six. The farm program operates on a slim budget and only few staff—funding and staffing capabilities inhibit the farm from expanding to serve more people.

Megaphone met up with the small but passionate crew of people powering Woodwynn earlier this summer. As program participants were busy with their daily routine and farm work, program leaders requested that they not be interrupted.

What follows are portraits of our time together. 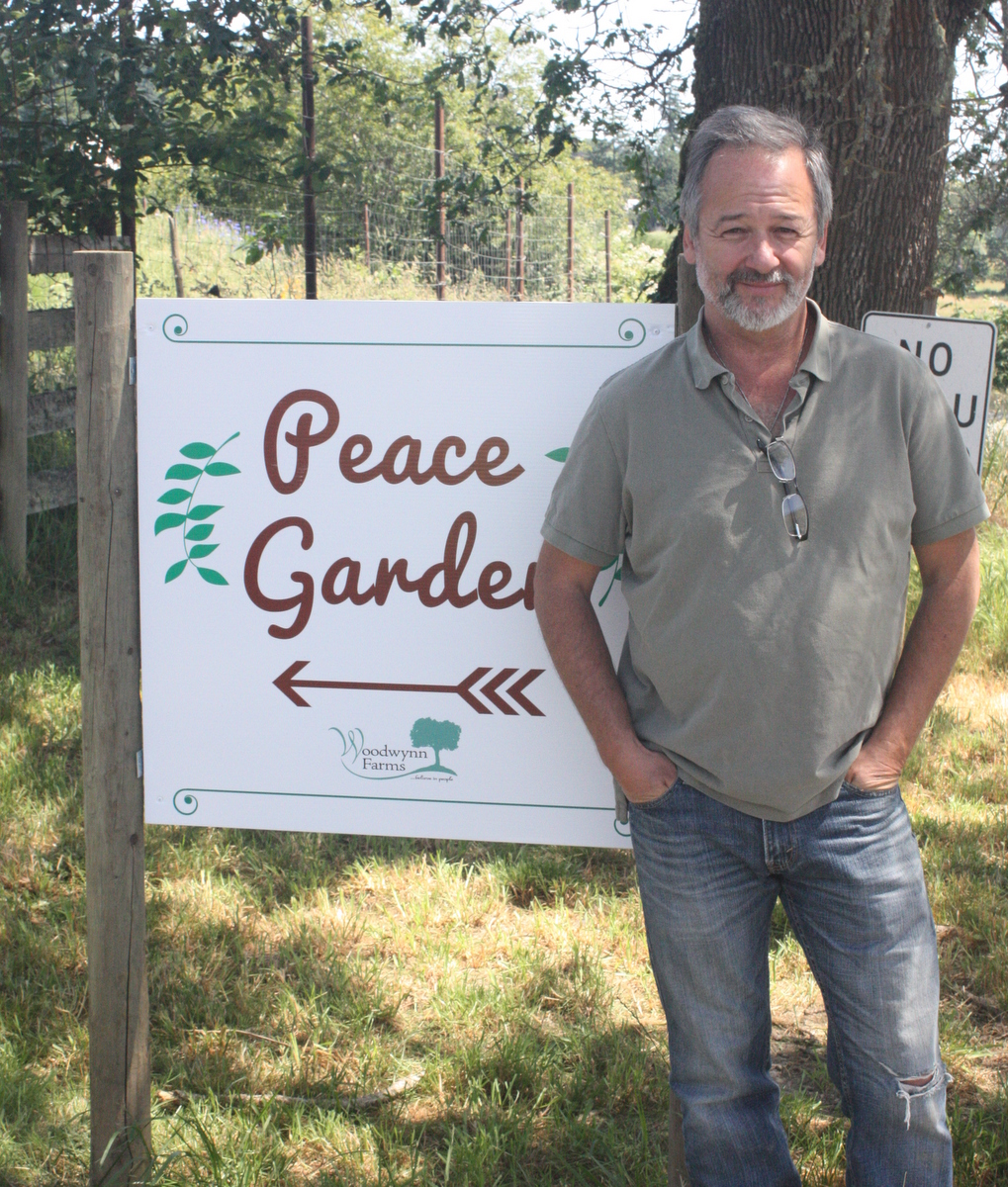 By 2007, the number of homelesspeople living in Victoria was over 1,200. Richard Leblanc, 55, had noticed the rise in homelessness over the years and knew he needed to do something aboutit. So he founded Woodwynn farms to combat homelessness, as well as tackle the addiction issues that often go along with it.

“I wanted a place that was about connecting,” Leblanc says. “We do everything in community.”

One key component of farm life,apart from having a daily routine, is togetherness. “Nobody eats alone. We prefer than nobody works alone,” Leblanc says. This strategy helps combat social isolation. Each participant is also paired a mentor who works alongside themas they move through the program.

The detox centre at Victoria’s Royal Jubilee Hospital is the main point of referral for future Woodwynn participants. If detox clients express a strong interest in changing their lives, they are referred to the farm. While still in their seven-day detox, they are invited to spend half a day at the farm, sharing a meal with participants, and asking any questions about the program. Then they return to detox, where they can decide if they want to join the program.

If the answer is yes, they are picked up straight from detox on their final day.

It can be difficult to adapt at first,and participants are not asked to start the full routine right away. Often still recovering, they work their way into the program, while still following the rules of not leaving the farm unsupervised, not having Internet access, and not using drugs. Throughout their stay, they are also weaned off coffee and cigarettes. Only two cups of coffee are allowed per day, and smoking is only permitted in one area of the farm, rain or shine.

As Leblanc says, he could spend two days telling individuals the steps they need to change their lives and remain sober,but by challenging people to “live it for a year...spend a year working on yourself,” Leblanc believes that people will live the healthy farming lifestyle long enough to make it an essential part of who they are.

Deryk Houston, 61, became part of Woodwynn Farms through his art. A visual artist based out of Victoria, Houston heard about the farm and wanted to take part.

For the last two years Houston, along with his wife (pictured here), Elizabeth Wellburn, 60, have been spending five to six days a week workingon building a contemplative peace garden and labyrinth on the farm. Though Houston is the main designer, participants and volunteers also provide input and help.

During his time with the farm, Houston says he has “watched participants go through and seen how they have developed and changed.” He notes that he’s seen remarkable changes in people who arrive at the farm in a very dark place in their lives and six months later are confident individuals, giving tours of the farm and taking part fully in the program.The program requires commitment, but rather than acting as a temporary fix, it “changes a person on all levels,” he says.

In the garden, like on the farm, everything is there for a reason. All the plants are edible, or draw in pollinators; even therocks are there to provide shelter. And one of Houston’s main projects, driftwood nests, functions by guiding people around the labyrinth and acting as markers. 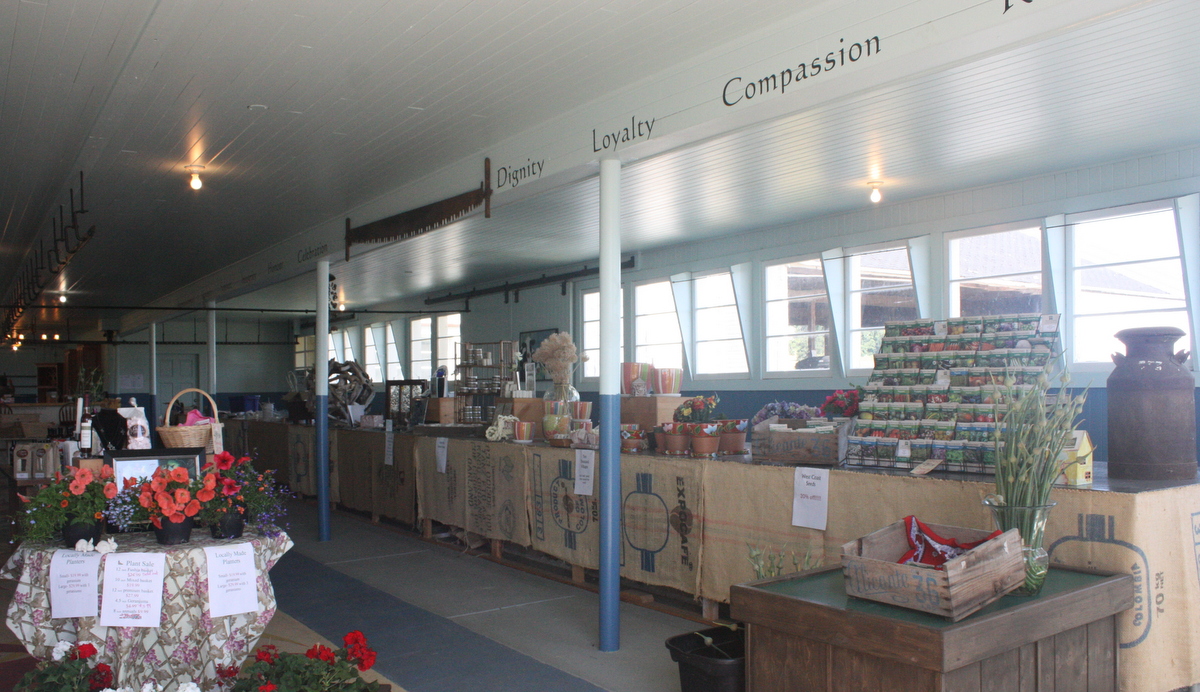 Natalia Baraniecka, 30, who requested not to have her photo included, has been volunteering at the Woodwynn market store for nearlythree months, as well as on the farm itself.

Originally from Toronto and formerly working in a corporate office setting, Baraniecka visited Vancouver Island last August and fell in love with the landscape and the people. When she moved here this spring, she wanted to take part in something where she could serve the community. Finding Woodwynn on the World Wide Opportunities on Organic Farms, or WWOOF, website, “Immediately I knew this is where I wanted to be,” she says.

It’s not only being out in the fresh air that makes Baraniecka feel this way, but also about the structure of the program itself. Every three days, participants, leaders, and volunteers explore a different core value and how it relates to self, others, and nature. As a group, everyone examines a value, like honesty, with its definition, contrast, and affirmation. “I think about these words differently,” Baraniecka says, “how we examined honour to the land... changes [your] outlook on everything.”

Baraniecka finds solace in the daily routine; she likes that it provides people with opportunities to habituate themselves to new ways of living. Connecting with nature and exploring humanness on the farm together is therapeutic and transformative.