join us donate
LOG IN or SIGN UP
Liquid syntax error: Error in tag 'subpage' - No such page slug join
find a vendor
September 11, 2012 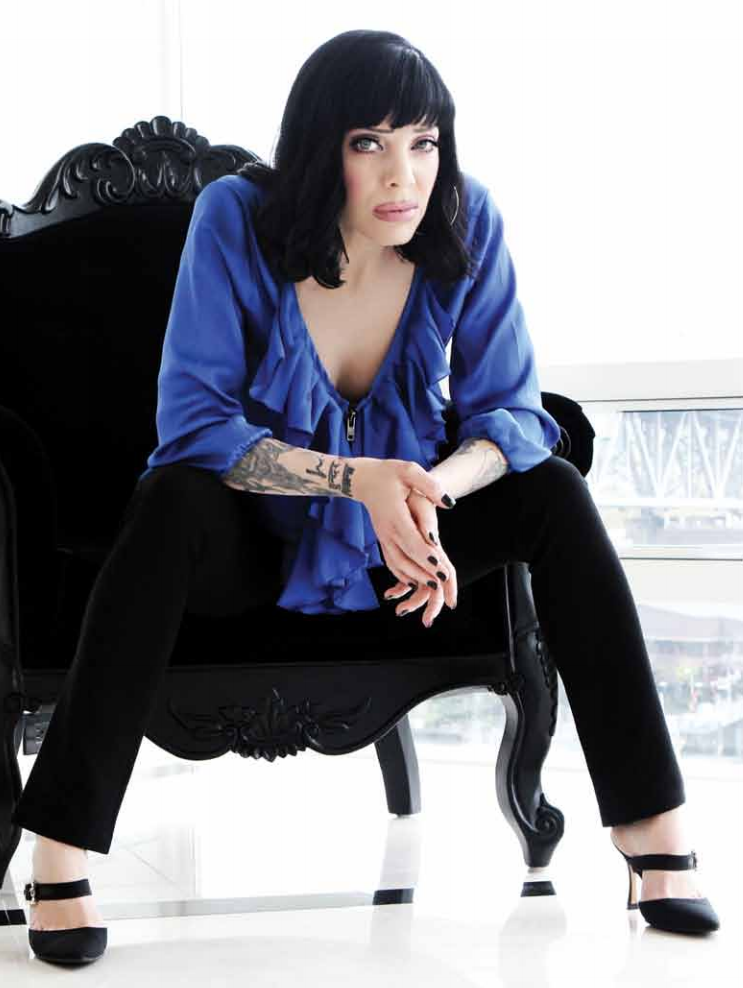 Bif Naked is a Vancouver-based, Juno award-winning, multi-platinum selling punk rock songstress. But all you really need to know about her is summed up by her Twitter bio: “International Recording Artist, Speaker, Lecturer, Advocate, Activist, Straight-Edger, Vegan, and TroubleMaker.” Oh, and she also kicked cancer in the ass.

So yeah, the 41-year-old has a lot going on, which is why we were all too happy to sit down with her and have her bend our ear on what makes Bif Naked so Bif Naked, and what she thinks makes Vancouver so, well, Vancouver.

MEGAPHONE: I read an interview you gave with Vancouver is Awesome where they asked you what you would do if they gave you $100. One of the things you said is that you would buy a stack of magazines from Megaphone vendor Danny.

Bif Naked: For sure. I know Danny very well, who’s outside Whole Foods on West 4th and Vine. He’s been there for many years.  You wind up getting to know each other in a way. Everyone knows him.

MEGAPHONE:  What is it that you that you like about Megaphone?

BN: I think it’s empowering for the guys who are selling it. It allows them to basically be a member of the community and feel good. The people I have worked with and know who have either been affected by mental health issues or affected at one time or another by homelessness, whether it’s temporary or not, [have experienced] a great deal of self-consciousness that goes along with it, [including] the presumption that they will either be judged or ostracized or alienated somehow by society and by the community. This isn’t really a unique insecurity, but it’s probably a conditioned behaviour that they have from being ostracized in the past or been made to feel self-conscious in some way, or even ashamed.

Homelessness can affect anybody, me or you. Every year that passes and I’m not homeless, I’m surprised. Honestly, it can happen to anyone, just through crisis, even in communities like Vancouver. Vancouver is a very wealthy society, I don’t think people realize what kind of a bubble it is here, and how different it is from most of the other cities in Canada. Vancouver is a very unique society and it’s a very, very privileged society.

MEGAPHONE:  You spend a lot of time helping raise awareness about these issues through your Twitter account, @bifnaked. What do you think people in Vancouver can do to help make a difference?

BN: I think that social media has really changed things for people. I may not have the time or the benefit of being able to be at an event and I feel like [tweeting about it] is the very least I can do to spread the word. I don’t know how non-profits actually survived before Twitter and Facebook. It brings a lot more attention to many of these different organizations. It’s like having a community bulletin board. 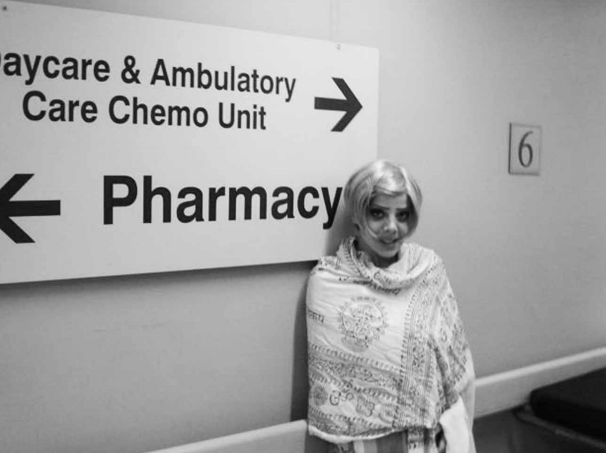 MEGAPHONE: You’ve been very open about your bout with breast cancer and often give motivational speeches to help encourage others going through the same thing. Do you think it’s changed how people respond to you?

BN: I think so. When I was first diagnosed with breast cancer it was almost accidental that I had to so suddenly go public about it because it was basically spreading to the media.

I had just gotten married, which in itself was a big deal. People kind of assumed I was just a raunchy rocker girl, all these things they just kind of attributed to a rock and roll singer. All of that couldn’t be further from the truth. I was a longtime vegan, [and] a longtime yoga advocate and participant, so for me to get cancer was very surprising to me personally, and also to a lot of my fans. It was a very romantic notion to think I would croak at the height of my career. I didn’t croak, but I did have to go bald and I did have a lot of complications. My husband and I didn’t work out. A lot of normal things that happen to people happened to me. I wasn’t going to sit quietly about it. I tried to be very discreet about many adversities that I have experienced, either through my divorce or through cancer.

I tried very hard not to complain. Because just the fact alone that I can afford food, the fact alone that I can buy a papaya—a papaya is $10!—to me that’s a blessing in my life. I look at some of the people I know who are dealing with living on the street, $10 can get them bus fare, almost a place to sleep for the night, something to eat. It’s all relative. Throughout having cancer, I knew it was a great gift for me to get chemotherapy. Many street women who are struggling with breast cancer either don’t know it or don’t seek treatment because their addiction will trump selfcare. That never escaped my thoughts every single day.

For me it seems like a natural transition in my life to be of service to people and being more community-oriented. I tour less now than I did before I had breast cancer, but that’s because I want to be home and I want to help in my own community. I’m really glad that it happened.

Had it not happened, I would still be somewhere in Russia doing a martial arts TV show and juggling that in between tours or something. I wouldn’t be as aware of what my passions are right now, and what I feel my calling might be. 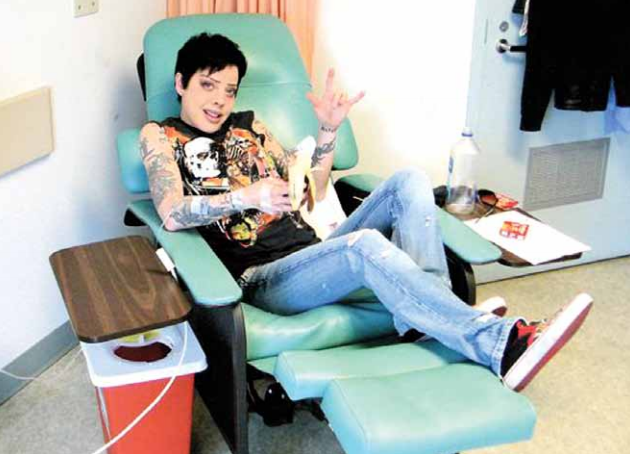 MEGAPHONE: You credit cancer for helping you realize you had an eating disorder. You said you’ve been a raw foodist because of your own personal health issues, but what was it like coming to terms with that realization as well?

My biggest reaction to stress was fasting on tour. Being on tour, or doing things like the Tonight Show, or doing Buffy, for someone like me, it probably fuelled undiagnosed anxiety issues and being self-conscious about being on stage. These are just normal things that most of us experience from time to time. My way of dealing with them was fasting. Your mind can go a million miles an hour when you’re anxious. I think I can relate to a lot of people who do have anxiety issues or panic issues because I’ve dealt with them, I’ve had them but I’ve had to put on my game face. I found that was true for cancer. I had to work through cancer and that was a very difficult thing.

MEGAPHONE: I think a lot of people appreciate how open you’ve been about that. That helps them be able to identify and feel less alone as they struggle with the same issues. You’ve talked about how when you first started performing, people wouldn’t let you speak your mind, they just wanted you to sing. With Twitter now, you’ve talked about how people can’t control your voice anymore. Do you think it’s a matter of you finding your voice or being able to find the right platform to finally speak your mind?

BN: I think unfortunately, and fortunately, it’s having that platform; no one can really censor you on Twitter. When one of the people I work with put up a Twitter account and said, “I need you to go on this every day,” I was horrified. I thought, “How can you ask me to do this! I couldn’t even reply to an email, I couldn’t cut and paste. What am I going to do?!” I just decided that I would be myself.

When I started Twitter I was still in treatment [for cancer] and I was finding my voice by trying to learn my own boundaries. I found that I really enjoyed connecting with people with Twitter. It levels the playing field and makes people equal, and that’s something I really like.

MEGAPHONE: Vancouver often gets dubbed “No Fun City” and there seems to be a feeling that this city isn’t really supporting its local artists as much as it could. What do you think needs to be done to make Vancouver more culturally vibrant?

It’s just astounding to me how people can afford all these things in their lives. I can’t. This month I had a vet emergency, which can be enough to wipe a family out. I don’t think it’s a priority for people to keep culture alive because they’re trying to find their little ways of escapism to help them suffer through the stress of all their debt. I think that downsizing for people should include lifestyle.

MEGAPHONE: You have an acoustic album coming out and there’s talk about a book. What other projects are you working on?

BN: Yes, we’ve done an acoustic album. Right now I’m revisiting it before we get ready to put it out this fall.

My book is a very funny thing for me. It’s been a very sensitive thing because I’m really self-conscious. I’m still dealing with cancer treatment, they took my ovaries out and I’ve been troubleshooting menopause as a young woman. This year my kidney failed and I had heart surgery. And I just think, “Well, God, there’s just no goddamn good reason that happened, so I must have cancer again.” But no, I’m not gonna croak (laughs).

In my memoirs I have to—well, I guess I don’t have to be totally honest, but how can I not be?