join us donate
LOG IN or SIGN UP
Liquid syntax error: Error in tag 'subpage' - No such page slug join
find a vendor
January 18, 2011

Base Logic: Hanging Out with DTES Drug Dealers

Over the course of three months last year, journalist Matt Chambers with Vancouver magazine The Dependent formed a (relatively) trusting relationship with a small group of drug dealers working the alleys of the Downtown Eastside.

The result of this is Base Logic, a four-part feature series exploring in depth the ins and outs of our local drug economy and the daily lives of the people involved.

In the quasi-illegal grey area that is the drug trade around here, Chambers finds a very delicate ecosystem wherein everyone fills a different niche in contributing to the game.

We see unaffiliated groups of dealers (not gangs, as the bosses insist) working alongside each other, sharing the common interest of evading the predatory grasp of the Vancouver Police Department. It all reads like an episode of The Wire, with dealers on the corner chatting about cars and joking about girls while constantly keeping an eye out for cops.

You've gotta hand it to Chambers—at those tensest of moments that would send other journalists crawling back to the drawing board to conceive of another way to tackle the story, he stands strong and continues conducting his interviews. But in a way, by hooking up with one of the men in charge, he is protected:

"My guys are the morning crew, and with them my presence is tolerated but not quite trusted. Dealers, unintroduced, stop mid-sentence to demand: who the fuck is this guy?
They remain silent, eyes fixed on me, until Royal confirms that I’m 'cool.'
-By walking around with you, I’m vouching for you, he explains. They’d never let you stand here.
I ask him why he bothers talking to me at all, and I get a cold shrug in reply.
-You’re not gonna decide that I know too much and kick the shit out of me one day, are you?
It’s the first time I’ve made him laugh.
-Nah man, I’m not telling you anything the cops don’t already know."

After addressing the intricacies of the dealing hierarchy, Chambers delves toward the relationships between the users and suppliers, a line which is often blurred and is always mediated by the threat of violence.

In the aforementioned legal grey area of the DTES' open-air drug market, police scramble to enforce from a harm reduction standpoint, and that means focusing on violent attacks over the costly busting of small-time dealers and users; this is where it gets tough journalistically, where the dealers are understandably least forthcoming and the interactional wall between subject and interviewer is thickest.

"According to everyone I speak to," he notes, "nobody sells heroin and nobody beats up workers." 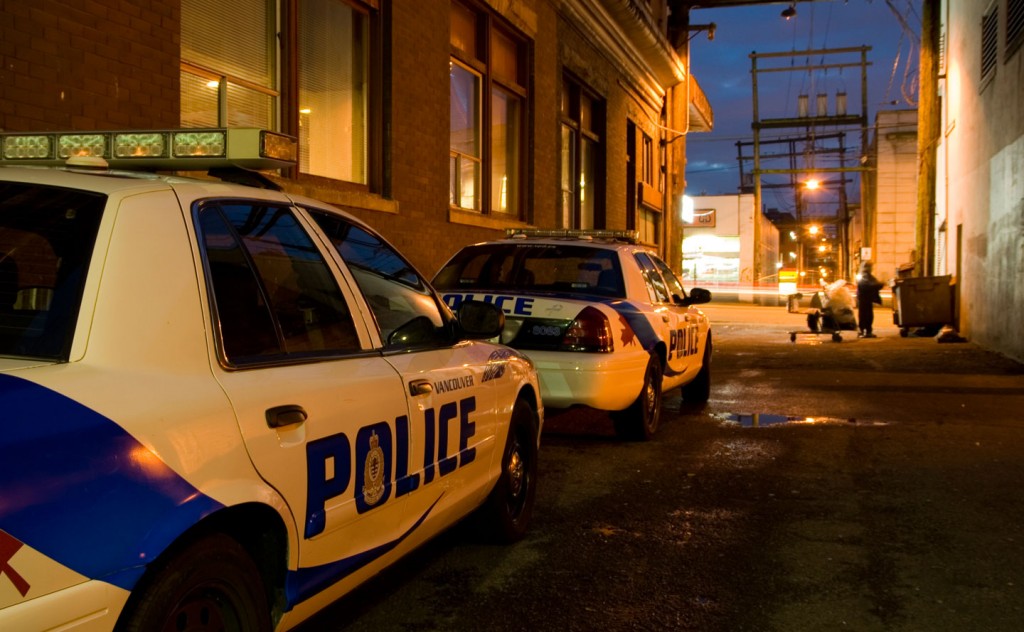 Still, in spending months with these dealers, Chambers learns that in the same way mere circumstance or misguided life decisions are a common theme in the personal histories of this neighbourhood's vulnerable addicts, the dealers are often no different.

"You think I like standing in this piss-smelling alley dealing with these fucking people all day?" one 17-year old contends. We hear of another worker whose engineering credits from Iran weren't accepted here, dumping him back to square one after four hard years of study.

It all makes unfortunate sense, though: despite all the predatory criminal behaviour and violence we see stemming from the drug trade, it's undeniable that for many of them this lifestyle is more about survival than anything else.

Does that make it all okay? It's debatable, though society at large would probably say no. But while the Base Logic series presents these issues without commentary or analysis, these stories certainly point to very important questions, on a much larger scale, that we need to be asking.

Questions about why BC has the lowest minimum wage in Canada (unchanged since 2001) despite the astronomical cost of living, leaving otherwise legitimate-minded individuals to seek other sources of income.

Questions about whether, by not regulating these drugs, government policy creates opportunities for naive kids to get caught up in the game through the allure of making hundreds of dollars a day.

Questions about what more we can do to protect those susceptible to all aspects of the illegal back-alley drug world.

After all, the "real" dealers in their West End high-rise condos are never the ones you see taking risks in the streets. And why would they be, when they can just hire a naive 17-year-old kid to do their dirty work?

Read the full Base Logic series on TheDependent.ca:

Base Logic Part One: Introductions

Base Logic Part Two: The System

Base Logic Part Three: The Violence

Base Logic Part Four: The People