join us donate
LOG IN or SIGN UP
Liquid syntax error: Error in tag 'subpage' - No such page slug join
find a vendor
May 06, 2017

Where do B.C.'s parties stand on ending homelessness?

Megaphone sifted through party platforms, media commentary, and emailed answers to our questions from the parties themselves to see how each party stacks up on homelessness. 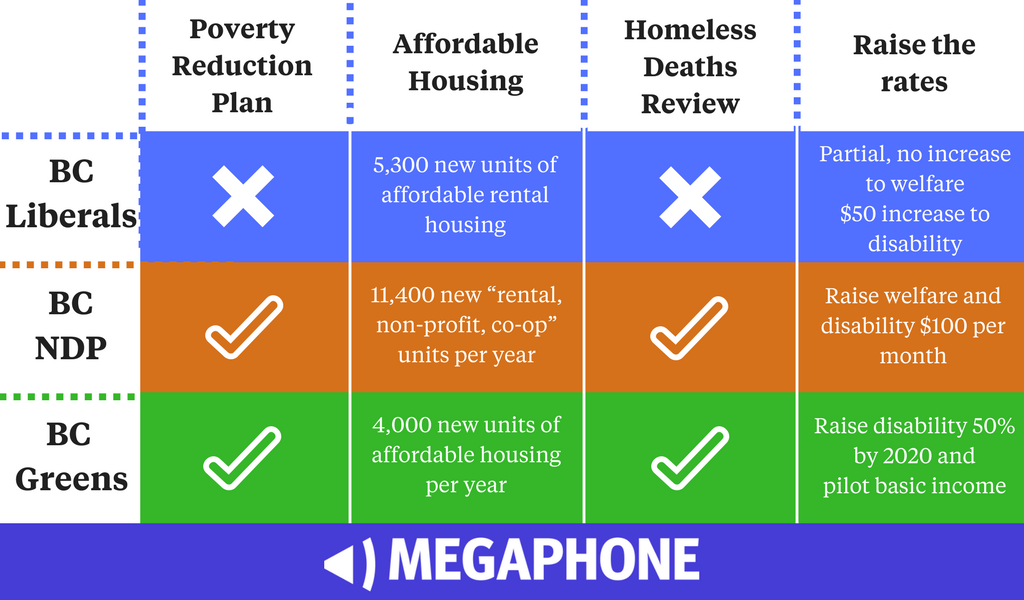 This election it’s been especially hard to get past the doublespeak, half-truths, and scandals. It’s also been hard to see people who are homeless mostly ignored on the campaign trail. Megaphone sifted through party platforms, media commentary, and emailed answers to our questions from the parties themselves to see how each party stacks up on homelessness.

We’ve identified a few key policy areas and evaluated how they plan - or don’t plan - to end homelessness, so you can make an informed choice on May 9.

No. The Liberals maintain their “Jobs Plan,” “LIFT: A Plan to Support People and Reduce Poverty” is “the best social program.” This plan does not commit to specific poverty reduction objectives are there are no targets and timelines.

Yes. The NDP commit to implementing legislation to bring in a poverty reduction strategy with targets and timelines.

Yes. The Greens commit to implementing a poverty reduction plan with benchmarks for progress.

In 2015, the last reported year, homeless deaths in B.C. hit an all-time high. More than one person died on our streets each week in 2015. We expect this crisis will only get worse. Megaphone has called upon the three main parties in B.C. to commit to a Death Review Panel on homeless deaths to find out why so many people are dying on our streets and what action we need to take immediately to save lives. Though this panel is a small commitment, it could signify an important shift in the way our next government approaches homelessness.

Yes. The NDP has committed to support an investigation into homeless deaths.

Yes. The Greens have committed to support an investigation into homeless deaths.

There are currently at least 6,860 people living without a home in B.C. With ‘hidden homelessness’ and the difficulty of counting people without homes, the real number could be more than 10,000. Advocates estimate we need an annual investment of $36 million to address homelessness.

Advocates also call for addition of 10,000 units of affordable housing per year just to keep up with housing need. A challenge with evaluating affordable housing commitments lies in how different parties define “affordable”.  For something to be truly affordable, we think someone who is living on welfare or disability should be able to afford it – which would mean housing available at the current shelter rate of $375 per month. It is unclear how many of the affordable housing units promised in the platforms will be available at the welfare rate.

Addressing homelessness is not mentioned in the B.C. Liberals platform.

But according to the Vancouver Sun, the B.C. Liberals promise to “build more multi-family dwellings faster.” The say they will allocate $920 million to the construction of 5,300 new units of affordable rental housing that “will be aimed at B.C.’s poorest citizens.”

The NDP has said they will build 11,400 new “rental, non-profit, co-op and owner-purchase” units per year for the next decade, ranging from supported social housing to market rental. It is not clear at what rate this new housing will be available or what “affordable” means in this context. Their platform says they will reform the Residential Tenancy Act. They have discussed a renters rebate of $400 per year. The NDP has also said they will create a Homelessness Action Plan, a Ministry of Mental Health and Addictions, and institute a Province-wide Homeless Count.

In their platform, the Greens commit to building 4,000 new units of affordable housing per year, investing $100 million per year to renovate existing social housing units, and enhancing the Residential Tenancy Act. They also speak about a coordinated response to mental health and addiction, and have committed to creating a Ministry responsible for mental health and addictions.

Basic welfare rates have not been increased in a decade. Currently, a single person on welfare in B.C. receives $610 to live on each month. $375 goes to pay for housing, but if a person is experiencing homelessness, they do not receive the $375 shelter amount. They only receive $235 to live on for the month.

As of April 1, 2017, a single person with a disability in B.C. receives $1,033 per month in disability assistance to cover all living expenses. At a basic level, people experiencing poverty in B.C. need to be able to afford shelter, food, transportation, and health care. Current social assistance rates keep people in a poverty trap.

Yes. The B.C. Liberals have committed to an increase to disability rates of $50 per month.

The NDP has also said they will restore the bus pass program for people with disabilities. The bus pass program, which previously offered an annual bus pass to people on disability for $45, was changed in 2016. The new system removed the $45 annual pass option, and instead asked people on disability to choose between receiving a $77 increase to their monthly cheque, or paying $52 monthly for a bus pass and receiving a $25 increase to their monthly cheque.

Benefit of up to $205 per month for low income families. They have committed to raise income assistance and shelter allowance for persons with disabilities by 50% by the year 2020. They will maintain and enhance existing housing support programs.

B.C. Greens party leader Andrew Weaver has also said the party plans to pilot basic income. But advocates, including Jean Swanson from Raise the Rates, say basic income could come at the expense of other social welfare programs.

The next B.C. government needs to make homelessness a priority. The leaders of our province should care that people die on our streets.

General elections will be held on Tuesday, May 9. Please vote!