join us donate
LOG IN or SIGN UP
Liquid syntax error: Error in tag 'subpage' - No such page slug join
find a vendor
October 25, 2019

by Simon Cheung follow this author
photos: There are fun activities at Foundry BC centres.
feature

When everything's not fine, BC Foundry can help 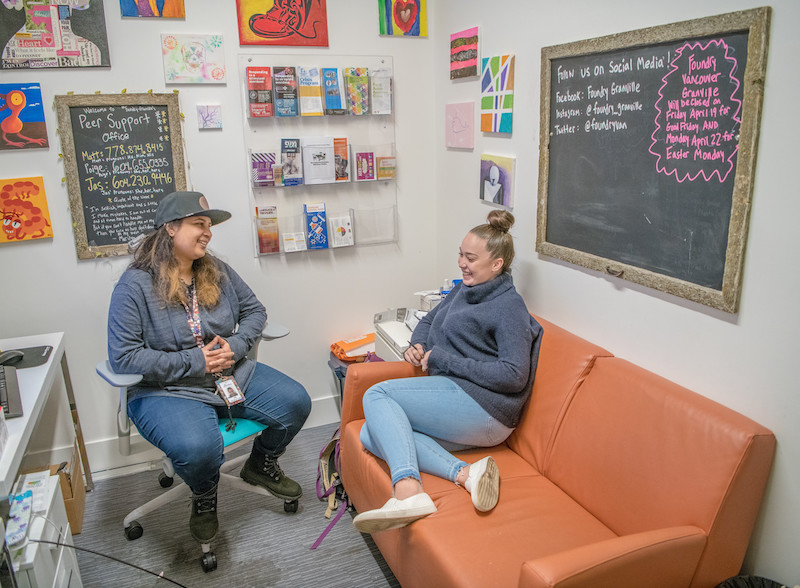 Can creating data from teenagers’ emotions be a crucial step toward improving health care in B.C.?

For the last three years and through more than 5,000 conversations, Barbic has been tracking young people’s emotional journeys—from the depths of homelessness, mental illness and addiction, to planning for their futures, to peace of mind.

Barbic is the lead scientist on the research and innovation team at Foundry BC, an organization that helps youth  and their families lead healthier lives. Foundry centres provide primary care, mental health, substance use, peer support and social services to young people aged 12-24.

There are currently eight Foundry centres across B.C. (Vancouver-Granville, Prince George, Kelowna, Penticton, North Shore, Abbotsford, Campbell River and Victoria), with three more in development (Richmond, Terrace and Maple Ridge/Pitt Meadows), totalling 11 centres. A Pathway to Hope: B.C.’s Mental Health Roadmap, announced in June, includes an expansion of eight new centres, which will bring the number of centres across the province to 19.

Log on to foundrybc.ca and the easy-to-navigate site guides the way to information on anxiety, body image and eating disorders, mood and depression, stress, substance use, life skills, grief  and loss, suicide and much more. It even incorporates a little levity, with humorous photos of teens sporting clearly forced smiles with the captions: “Everything is fine.” 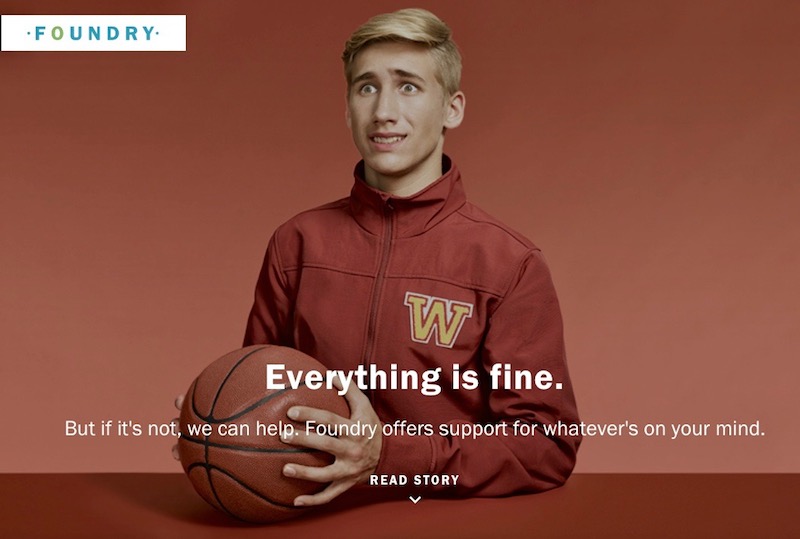 An assistant professor at the University of British Columbia Faculty of Medicine’s Department of Occupational Science & Occupational Therapy, Barbic sees the information she’s been tracking as vital to understanding outcomes important
to youth. The resulting insights not only help her young clients create personalized care plans, they shape the organization’s programming to follow through with youth from first contact to future success.

In contrast, says Barbic, conventional health care is largely based on a simple  premise: “You’re either sick or you’re not sick. Or you’re dead or you’re alive.”

When viewed through that lens, youth only receive care when they’re in crisis, “because that’s all we’re trying to measure,” Barbic says. “The sick/not-sick model is not what Foundry tries to do.” A 2014 report from the B.C. legislature’s Select Standing Committee on Children and Youth bears witness to the crisis approach, stating that “the number of youth accessing emergency rooms has almost tripled since 2008-2009, and that youth are being discharged from emergency rooms without any follow-up. A written submission from Fraser Health similarly described how hospital admissions and emergency departments have been congested with young people requiring acute psychiatric care.”

In 2002, Statistics Canada’s Canadian Community Health Survey’s Mental Health and Well-being Cycle found that 68.8 per cent of Canadians aged 15 to 24 with a mood or anxiety disorder reported that their symptoms started before the age of 15, while 69.3 per cent of 25- to 44-year-olds, 47.9 per cent of 45- to 64-year-olds and 34.1 per cent of those aged 65 or older said their mental illnesses started before age 25.

Ten years later, a 2012 survey found that the prevalence of mood (8.2 per cent) and substance use (11.9 per cent) disorders among youth aged 15-24 were the highest of all other age groups measured.

Barbic, who has been an occupational therapist since 2004 and has worked with Foundry since its initial proposal five years ago, notes that the years from 12 to 24 involve major transitions in youth’s lives—periods when people are usually the most vulnerable.

“[Foundry’s approach is] about asking young people what’s important to them,” she says, “being able to capture that in
the clearest, most transparent way, and being able to get that data back to them as quick as possible so they can use it to have a conversation with their doctor, have a conversation with their family members, their teacher… whoever is important in their lives to say, ‘Here’s where I’m at, here’s where I’m going, and here’s how I’m going to get there’.”

Malcolm Jenkins, the patient care manager at Foundry’s Vancouver-Granville location, says having a team of different clinicians under one roof allows for data collection at a multitude of stages in youths’ lives. He has received feedback from clients stating that Foundry is the first health care experience where they felt heard and included.

“Not just included as a part of a group of people,” Jenkins specifies, “but that they felt included in what was happening to them. I think also the level of engagement that we have is pretty amazing.”

Over the past year, as of July 2019, approximately 9,500 clients visited Foundry centres across the province, and a number of them returned for ongoing care. The organization has hired former clients, and consults with youth (and youth-identified family) advisory councils in each of its locations regarding program development and implementation. Politically, Foundry has inspired cross-party buy-in.

It received initial funding in 2015 from a B.C. Liberal majority, and on June 26, 2019, the NDP/Green coalition government announced Foundry’s expansion from 11 to 19 locations in A Pathway to Hope—a 10-year vision statement for improved mental health and addictions care. At the time, only seven of the planned locations had opened (an eighth, in Penticton, opened July 4).

Barbic credits this success to Foundry’s speedy sharing of data.

“Traditionally, research outcomes take about 17 years to get from data collection to being implemented in practice or policy. We’re able to do that within 17 minutes.”

Word of mouth has helped too.

“The most important piece was probably that the communities were asking for it,” she says.

Jenkins adds there is great interest from other communities wanting to hear about what Foundry is accomplishing. Similar projects have taken root elsewhere. In 2006, the Australian Government Department of Health founded headspace, a multi-faceted youth support program with 109 locations and plans for more.

In February 2017, Ontario announced funding for 10 Youth Wellness Hubs, four of which are now in operation.

“My worry,” Jenkins says, “is that youth do really well within our program, but eventually they age out. There’s going to be a percentage of adults that are going to require this level of integrated, more intensive care.”

Barbic sees Foundry’s success as a way to push for increased investment in a full range of services, for all demographics.

“I’ve had a whole career of being frustrated in the mental health system and thinking, ‘What can we do? What can we do better?’ ” she reflects. “What are those core services that we need in every community in B.C.?

“I’m thankful that there is an investment in young people, but I think, really, it’s just the start of this conversation of an incredible, under-funded area of research.”