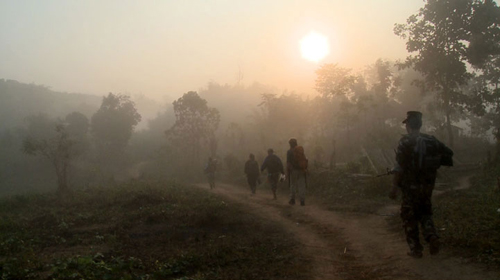 Human rights abuses are rampant in the world. They happen in times of peace and prosperity and in times of war; in developing countries and developed ones.

Alongside oppression and repression are strong networks of resistance, resilience and hope, testament to the strength of the human spirit. From November 18 to 21, Amnesty International’s 15th Annual Film Festival (AIFF) invites viewers to bear witness to this dichotomy in its many forms from India to Canada and Liberia to Australia, and to recognize the global systemic roots these injustices spring from.

Over the past 14 years, Amnesty International has brought the AIFF to over 40 communities in Canada. Many of the films showcased are made by independent filmmakers who struggle against financial and political constraints to have their stories of struggle and hope heard. Amnesty highlights the power of the film medium to raise awareness and provoke dialogue over human rights.

Film showings alongside guest speakers and panel discussions nurture frameworks of understanding which can empower viewers from ignorance to possibilities of action.

One of the AIFF featured films this year is the Canadian Premiere of Nero’s Guests, which follows the life work of P. Sainath, rural journalist and anti-poverty activist.

The mainstream media paints a picture of India as a rapidly modernizing, developing society which is fast becoming prosperous and cosmopolitan and, when this documentary was made, no Indian newspaper had a full time correspondent working on poverty.

This documentary follows Sainath as he uncomfortably straddles two worlds, plagued by the reality that the government policy of ‘helping the rich help the poor’ means that an Indian farmer might take his life over not being able to get reasonable financing on his land while economic incentives encourage the middle classes to finance luxury vehicles at the lowest rates.

Sainath uses a powerful and disturbing metaphor for why raising awareness about human rights violations is necessary. In Tacitus’ account, Nero threw a party while Rome burned. To distract the elite from the dire situation, he lavished entertainment and food upon his guests. Unable to provide illumination for the palace gardens as the party went into the night, Nero brought Christians and other criminals from the prisons and burned them at the stake to provide light.

Sainath believes that Nero’s crimes, while great, are not at issue. The ability of his guests to look the other way and to continue celebrations by the light of burning fellow humans is more troubling. He sees this as a metaphor for the way Indian society discounts 70 per cent of the population, suffering, starving and oppressed, as beneath notice. This metaphor can unfortunately be extended to the worldwide structures of inequality and oppression that characterize the processes of globalization and the capitalist system.

Another featured film, Pray the Devil Back To Hell, paints an optimistic and riveting picture of the successful Women of Liberia Mass Action for Peace which, in 2003, was elemental in achieving peace after 14 years of civil war. The recipient of numerous jury and best documentary awards, this film has also been used as an advocacy tool in post-conflict areas, mobilizing African women to petition for peace.

Told as a multi-sided narrative through interviews with key women organizers  interwoven with extensive footage and photos from the events described, this extraordinary tale of grassroots resistance captures both the atrocities of civil war and the strength of the movement in an honest and moving way. A major focus of this film is the strength of unification. From the beginning of the movement, Christian women and Muslim women decided to fight war in solidarity rather than as two groups. Because the conflict was between the government of Christian Charles Taylor and the Muslim LURD warlords, the united women were in a better position to force both sides to the peace talks. This kind of unification was a first in Liberian history.

The documentary follows the women’s movement from its beginnings through Charles Taylor’s resignation and exile. When the fighting wasover, the women’s movement worked through the disarmament and the rebuilding of society. The first president elected after the conflict was the first African female

In all corners of the world, human rights are threatened and people are resisting. Whether resistance is a single journalist or thousands of religious women, it starts with the refusal to ignore injustice in the world. By providing a space to raise awareness, humanize the marginalized and highlight successful resistance, the AIFF helps us avoid falling into the same trap as Nero’s guests.