join us donate
LOG IN or SIGN UP
Liquid syntax error: Error in tag 'subpage' - No such page slug join
find a vendor
March 12, 2019
by Paula Carlson follow this author
photos: Above: A small selection of names—from friends and family, media reports and @MomsStopTheHarm—of people who have died as a result of substance use
feature

Behind every hard number is a human being 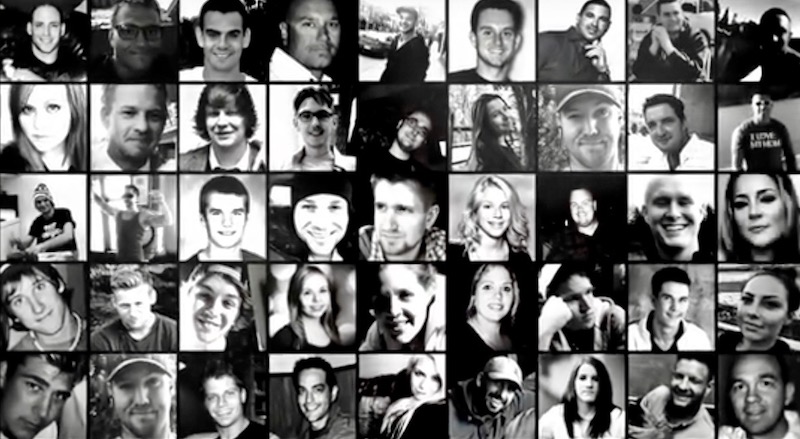 Editor's Corner: As the fatalities in the ongoing drug overdose crisis continue to grow, so do the stories of tragedy and loss.

“I try to count how many of my friends and colleagues have died... I get to around 50 and I just have to stop.”

"We used to put pictures on the wall at VANDU (Vancouver Area Network of Drug Users), of the people, you know, that we lost. It's hard to keep up with it nowadays."

Chad Robbins died in the doorway of his five-year-old daughter's bedroom in the six seconds it took him to use morphine cut with fentanyl in the bathroom and walk towards the little girl's room.

She was the one to find him.

Robbins was set to go to detox and a treatment centre two days later. He was a gifted athlete and a skilled construction worker. He was 32 years old.

His mom still sobs when she talks about her son, her "baby," who was trying hard to get well.

"They say after a year it'll get better," Pam Robbins says tearfully. "But it'll never get better."

The tools of the journalism trade are straining under the sheer weight of Canada's drug crisis.

Tell a person's story, aspiring scribes learn in J-school, humanize the issue, talk about complex subjects in plain language like you're chatting with a neighbour over the back fence.

Five, 20, 50, 90... these are the responses people in the Megaphone community give when asked how many acquaintances, friends and loved ones they have lost to drugs.

If each page of this magazine was to feature the story of someone who died from an opioid-related overdose in Canada between January 2016 and December 2018, we'd have to print a magazine each day for a year.

Would that work? Would more stories of broken dreams and shattered families propel this relentless public health crisis towards resolution?

It's not for the lack of telling.

In addition to Pam Robbins speaking out, there are many other voices... growing larger and getting louder.

There are R.I.P. lists at VANDU and every other resource site in the Downtown Eastside, recurring protests with crosses in Oppenheimer Park, colourful homages in the alleys by graffiti artist Smokey D., a prayer flag shrine on Vancouver Island, and Canada-wide lobbying efforts by the 600-strong Moms Stop the Harm organization.

And still, the overdoses continue, with an average of four people dying each day in B.C.—10 across the country.

With so many casualties, it's easy to see why the members of a new podcast called Crackdown (featured on page 14 of the March 2019 issue) describe themselves as "war correspondents."

This is meant with no disrespect to the military men and women who have lost their lives or put themselves in harm's way in the service of their country.

It's simply acknowledgement of what anyone who has experience with substance use, addiction or recovery knows: Life
in those trenches is a battleground.

It's a fight to find help, to get housing and health care, to trust or hold onto hope against a barrage of seemingly insurmountable obstacles.

Sometimes, too many times, the battle is lost, and life turns to death in six seconds or less.

There's the simultaneous struggle with stigma, too. As the scope of the overdose epidemic threatens to foster apathy, there is the dark belief both hissed in whispers and shouted out loud: They're just junkies.

Not according to Roger Harris, whose deceased son Brennan Harris, 23, was a music lover, apprentice mechanic and new father.

Or Cindy Liefke, whose daughter Cheyenne Sekura, 26 and a twin, was artistic, smart and a "force to be reckoned with."

Or Pam Robbins, now raising her dead son's child and fielding questions as to why her Daddy hasn't come home.

Their life stories, not their deaths, show what must never fall on deaf ears during this devastating drug crisis: Behind every hard number is a human being.

Paula Carlson is the managing editor of Megaphone magazine.