join us donate
LOG IN or SIGN UP
Liquid syntax error: Error in tag 'subpage' - No such page slug join
find a vendor
November 13, 2018

by Megaphone follow this author
photos: Jack (above) and Blair (far right, with filmmaker Melanie Wood) are residents of HOpe Centre
feature

Behind every mental illness is a person—and a story 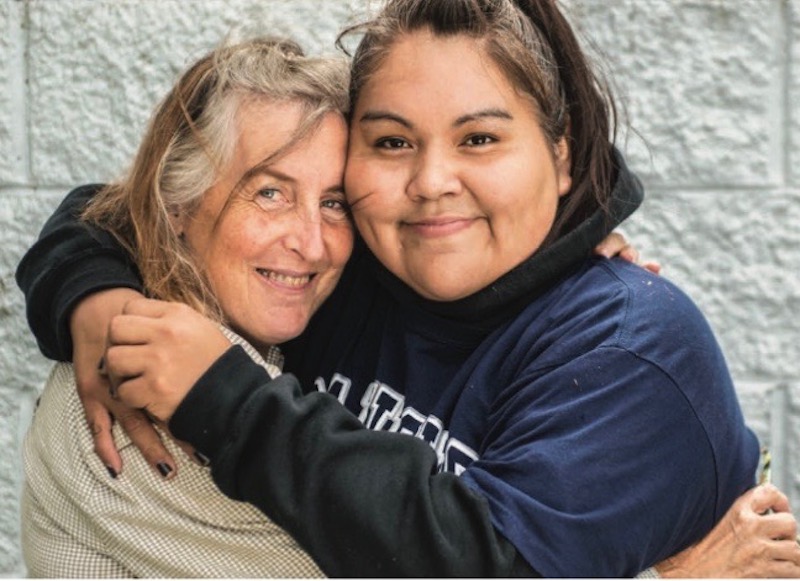 Documentary series focuses on the lives of those admitted to the HOpe Centre for psychiatry and education in North Vancouver.

Thanks to anti-stigma campaigns, many people are aware of the prevalence of mental illness—one in three Canadians will experience mental illness or a substance use disorder in their lifetime, while more than 600,000 Canadians have reported needing mental health care that isn’t provided.

But often, stories about mental illness are told after a solution has been found, or when individuals are “better.”

A new documentary series airing weekly for four weeks on Knowledge Network (and online, free to stream) starting Nov. 6 called Living in HOpe aims to answer these questions and more.

“Often we hear about mental illness only after someone has recovered,” says Melanie Wood, writer and director of Living in HOpe. “As a society we are used to hearing—and wanting—success stories, but the reality for many who experience mental disorders is that it is a long, sometimes lifelong struggle.”

Living in HOpe shares the stories of individuals admitted to the Greta and Robert H.N. Ho Psychiatry and Education (HOpe) Centre in North Vancouver. There is Drew, a piano tuner who lights up the room with jazz when he visits the centre to “tune up” his medications for bi-polar disorder. Blair is an Indigenous woman with a huge smile who is healing from trauma. Kevin, Soroush and Donald are young men admitted for psychosis after recreational drug use. And Marjorie is a cancer patient who is facing a reduced availability of chronic pain medication due to the opioid overdose crisis.

“By sharing stories of patients, even when they are at their most vulnerable, we better understand that people living with mental illness are not ‘other’,” Wood says. “They are just people. And they have a voice.”

Q: What inspired you to create Living in HOpe?

A: I welcomed the opportunity to meet people who are not ordinarily seen or heard to help them tell their story.

From a professional perspective, my work has always focused on a combination of the universal and deeply personal. On
a personal note, I care because I have family members who suffer from mental illness. A cousin’s son died by suicide. And I remember times when my mom was debilitated by depression and spent months unable to get out of bed. Producing Living in HOpe was an opportunity to contribute to ending the stigma of an illness that affects so many of us, yet few openly discuss.

Q: Do you remember your first experience within HOpe Centre?

A: I remember walking into HOpe on the first day of filming in January with the crew. I had an elaborate plan for filming: what to record, how to set up. As you may expect, absolutely nothing went as I had planned. What did happen, however, is that some of the patients were un-decorating a Christmas tree and broke into Hey Jude. It was a surprising, moving moment. We all had a few tears. The cameraman said, “You don’t need to make up a shooting schedule. Just show up and something will happen.” And it did. It always did.

Q: What misconceptions did you have going into the filming process?

A: I assumed I would be talking to people I would find difficult to relate to. As soon as I started the first conversation, however, I realized that—of course—we had common ground. Before this process I may have had a philosophical understanding of our “sameness,” but I quickly realized that intellectually knowing we’re all just people, and truly feeling that, is very different. I knew I was going to learn a lot about life from the people I met in HOpe.

Q: Can you tell us a little about your filming process in HOpe?

A: My production team was small— camera, sound and me. We were at HOpe Centre several days a week for over a year. We had plans to film certain people on certain days, but would often meet new people who wanted to tell us their story. We’d spend time in the common areas waiting for action. And of course we spent time in the team station, where we got care provider perspectives, listened to their conversations and began to understand the complexity of their work.

Q: What do you think will surprise viewers the most?

A: There is a lot of humour. I guess I had expected that people who were in an acute phase of their illness would be very serious, even a little cranky. Some were, of course, but many people we met had a great sense of humour and shared lively conversation with us and other patients. For many there is companionship and a sense of safety in HOpe Centre.

Q: Could filming people who are severely mentally ill be seen as exploitation?

A: Everyone who is featured in the documentary signed a consent form. If filming with them was ongoing, they were asked to sign another consent form once they left HOpe Centre. They later reviewed the edited scenes of themselves and if they still agreed for it to be shown, they signed another form. For a few individuals who couldn’t legally consent on their own but wanted their story in the film, a psychiatrist or guardian co-signed a consent form with them. Believing that mental illness removes individuals’ capacity to make decisions for themselves is a form of stigma in and of itself. Living in HOpe helps give patients and their families an opportunity to share their experiences and stories. In our view, to not give them a voice would be unethical.

Q: How do these documentaries offer a different perspective on mental health?

A: This film takes place in “real time,” giving a close-up and intimate look even when people are most vulnerable. It’s very different than reading about their experiences after the fact. It’s a privilege for us to be with them while they go through something crucial in their lives. Living in HOpe provides a fascinating look at how the human brain works and I think everyone will find someone in the film they can relate to.

Q: Many campaigns in the past few years have worked to decrease the stigma of mental illness. Have you seen Canadians’ perceptions change as a result?

A: I don’t believe there’s as much change as we need. We still have the idea that mental illness is something people
will “get over” or expect every story to be a tale of happy-ever-after. These transformational stories are powerful, but they do not reflect the majority of cases. People we met through filming admitted they still feel guilty and ashamed. The message they receive from much of society is that the realities of mental illness should be hidden. I believe that everyone needs to look at all parts of mental illness— including the difficult, perhaps scary parts. We cannot wait for people to “get better” before they share their stories.

Q: If there is one thing you would like people to take from the Living in HOpe documentaries, what would it be?

A: I hope the film makes people who are “not like us” seem less scary. When we can stop seeing people as “other,” that’s when we can make real change.

Living in HOpe premiered Tuesday, Nov. 6 at 9 p.m. on Knowledge Network and online at Knowledge.ca. It continues throughout the month of November.