join us donate
LOG IN or SIGN UP
Liquid syntax error: Error in tag 'subpage' - No such page slug join
find a vendor
May 28, 2019 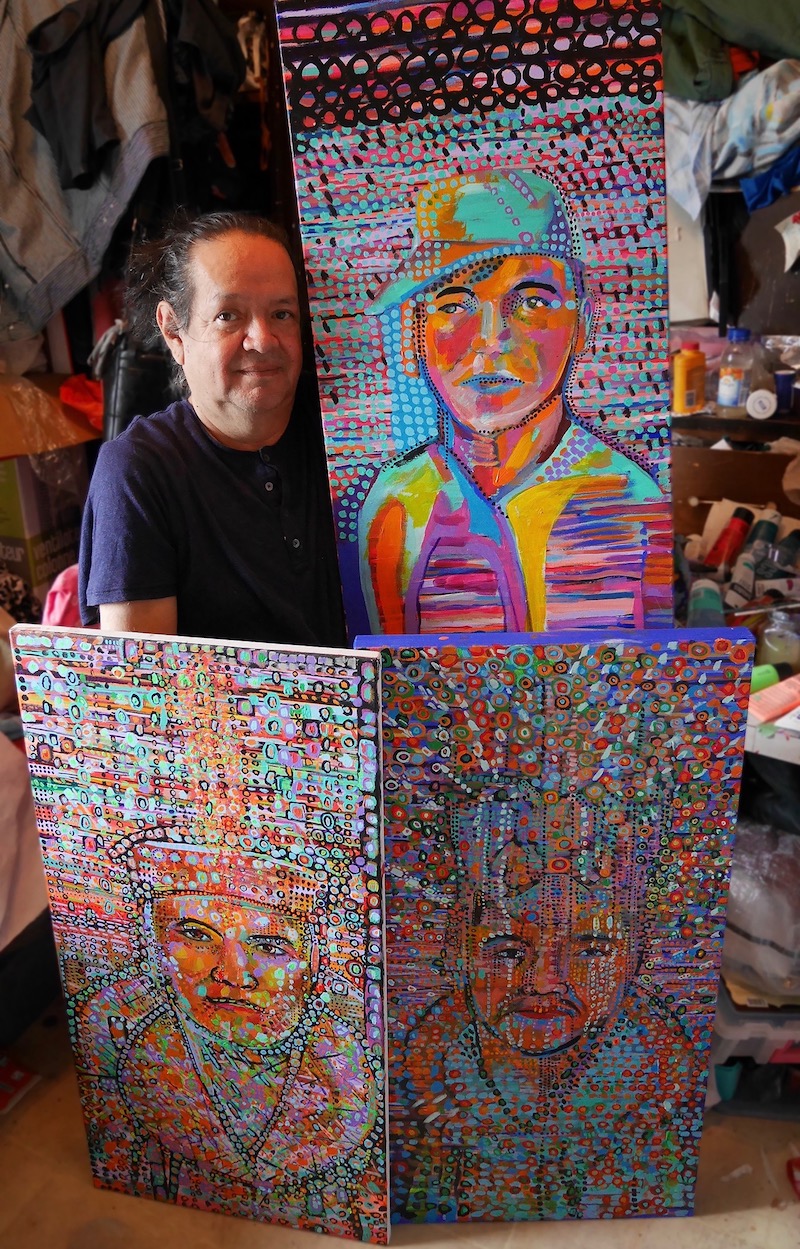 Norman James Hall sits in the far corner of the art room of the Carnegie Community Centre, hunched over the jean jacket laid across his lap, hand poised with a needle drawing from a spool of red thread.

The room is filled with people, all chatting loudly over the large table in the centre and passing oil pastels to one another. The space at this hour of the day has an air of equal parts art studio and bustling reunion hall. That is, except for Hall’s corner, where he sits silently in a world his own, surrounded by his paintings and determinedly focused on the project in front of him.

Hall is a Nuxalk, Tŝilhqot'in, Heiltsuk, and Kwakwaka'wakw artist and residential school survivor born in Bella Coola, B.C. He has been diligently creating art in the basement of the Carnegie every Sunday and Wednesday afternoons for years now. His attention to detail and mastery of a variety of mediums are born of decades spent committed to his craft.

Though his art has been regularly showcased in the Downtown Eastside over the last decade, as of November 2018, Hall got the opportunity to share his work on a scale that would have once been considered unimaginable.

Commissioned by the City of Vancouver’s Cultural Services and Engineering Services department, six of Hall’s portraits now hang on massive 126” x 256” banners at the Vancouver Public Library’s Central branch, in the public promenade area, where they will remain on display until the fall of 2019.

After being selected from a pool of 40 other artists, Hall was given just three short months to complete the portraits—a series he calls Chiefs and Nobles.

Many of the men depicted in the portraits are ancestors of Hall’s.

“That’s where I got my inspiration to do the reconciliation program, to lift up the chiefs, who they [were] and where they stood in their community,” he says. “I got Willie Mack in there, he’s my mother’s father,” Hall explains. “These men worked hard, they broke their backs and they helped each other and when I see them up there, I just feel really privileged... to tell their story.”

Hall’s own story, including his time spent in residential school, is in many ways inseparable from his artwork.

The Canadian residential schools were government-sponsored religious schools designed to culturally assimilate Indigenous children into the new colonial Euro- Canadian culture. The program started in the 1880s, with the last residential school only finally closing its doors in 1996.

The Indigenous Foundation at the University of British Columbia describes the residential schools, saying: “Abuse at the schools was widespread: emotional and psychological abuse was constant, physical abuse was meted out as punishment,  and sexual abuse was also common.”

When Hall ran away from his Port Alberni residential school, he made his way to Vancouver, where he spent time living homeless in the Downtown Eastside until his aunt Betty found him.

Hall says he suffers from Post-Traumatic Stress Disorder due in part to his time spent in residential school.

“My life kept getting side-tracked because of residential school and that defeatist behaviour that [says] you’re not any good and you’re not worth anything. There was no residential school syndrome in those days, but it was in our behaviour, in the pattern of what hurt us the most. It was inside [us] and it never let us go,” Hall says. “To this day, I’ll still sometimes look at my stuff and say it’s not good enough. It’s not going anywhere, so I just stick with what I know. This is it.”

Despite the “poison” that he says is still inside of him from residential school, Hall has found strength in his experiences and dedicates his time to honouring the stories of his ancestors through his artwork.

In need of a broader audience

Hall’s big break was due in part to a collaboration with good friend
and project manager, Kazuho “Kay” Yamamoto. Yamamoto and Hall first met in 2013 while Yamamoto was working at Oppenheimer Park, where Hall would participate in the community art shows.

“[When you see] his art, it’s really striking the talent he has, and I think his visual language is really powerful, especially his experience as a residential school survivor,” Yamamoto says. “I felt his visual language should be seen by a broader audience.”

When the opportunity to apply for the Vancouver Public Library’s Aperture Project arose, Yamamoto assisted Hall
with the application process by turning their conversations into a formal proposal, negotiating Hall’s contract, and even paying for the initial costs for materials and a storage unit to help convert Hall’s SRO (Single Room Occupancy) unit into an art studio while he worked to complete the project.

“My work was admired by people who work at [the Carnegie] and at Oppenheimer Park, but [Kay] was the only one who threw her money into it,” says Norman. “I’ll be archived there at city hall and at the library. I’ll have my status as a commissioned artist... because of reconciliation I have the opportunity to be registered and be archived and that’s a really big deal. You can’t buy that, but [Kay] helped pay for it.”

As a child, Hall’s grandmother blessed him with a beaver paw.

“They had this little beaver paw and they would rub it and say prayers in their native language. It was tradition so that you’d never be lazy,” he explains.

The results of the beaver paw blessings are evident in Hall’s artwork. His pieces are incredibly involved. Backgrounds that first may appear to be an abstract kaleidoscope of colours later reveal horses, buffalo, women travelling through mountain passes and other images layered upon one another. Many of his projects go through several iterations spanning years before Hall is satisfied. 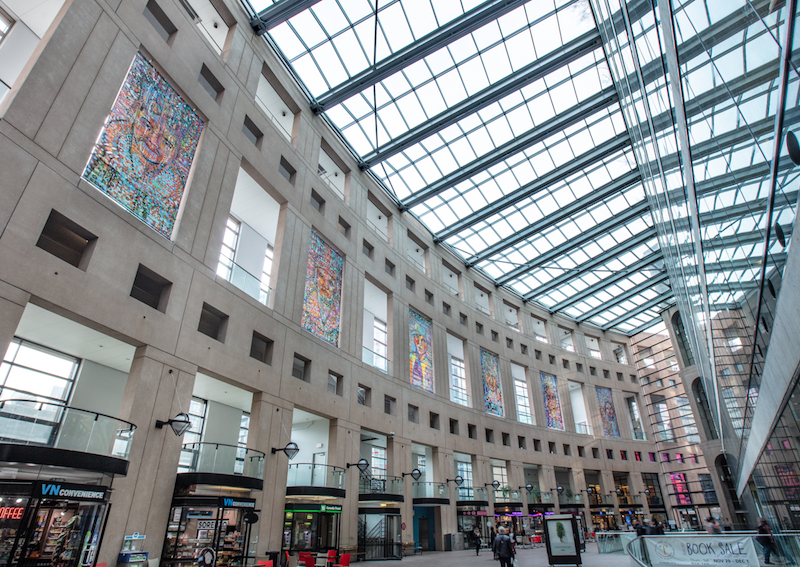 At right: Norman James Hall's 'Chiefs and Nobles' banners look down on the public promenade at the Central branch of Vancouver Public Library. Chie Nomoto photo.

“I got rid of [the old design] because it didn’t mean anything anymore. If you are in an art gallery... you’re going to be looking at it for a reason. You’re going to see different things jumping out at you.”

Hall hopes that the exhibition at the Vancouver Public Library will pave the way for bigger projects. Yamamoto’s and Hall’s next goal is to get his canvases displayed at the Vancouver International Airport.

“I think the best thing [people can do] to support him is to go see his paintings,” says Yamamoto. “I think that will really make Norman happy and I think that’s how we can spread his visual language. You know his background, his paintings might look sad or vulnerable or happy, but whatever you [see and] hear, it’s his authentic voice, so I think we can hear and support him.”

Hall would like to specifically encourage other First Nations artists to apply for the art grant programs offered through
the Carnegie Community Centre.