join us donate
LOG IN or SIGN UP
Liquid syntax error: Error in tag 'subpage' - No such page slug join
find a vendor
July 24, 2017

by Megaphone Magazine follow this author
photos: The FireGuy.

Busking out those street performances

Whether it’s a unicorn unicyclist or eyebrow-burning fire breathers, Downtown Victoria’s Busker Festival is conjuring a new dimension on the city’s sidewalks

Visit downtown Victoria for any length of time during the summer, and it’s pretty likely you’ll run into a street performer. Buskers are a common fixture anywhere there’s a crowd with money to spare, but Victoria’s rich cultural scene makes it a hotspot for performers looking to make a mark.

It should come as no surprise, then, that Victoria’s equally robust festival scene includes an event dedicated to street performers of all types: the Downtown Victoria Busker’s Festival.

For a while, it looked like there would be two buskers festivals running concurrently this July. But last December, the International Buskers’ Festival Society announced the cancellation of its 2017 season. Its festival founder John Vickers citing finances and competition with the Downtown Victoria Busker’s Festival as the cause.

At the time, the business association had no comment on the cancellation.

But Kerri Milton, the association’s executive director, told Megaphone in an email that “our partners came to us last summer and asked if we would take the lead on this community festival.” 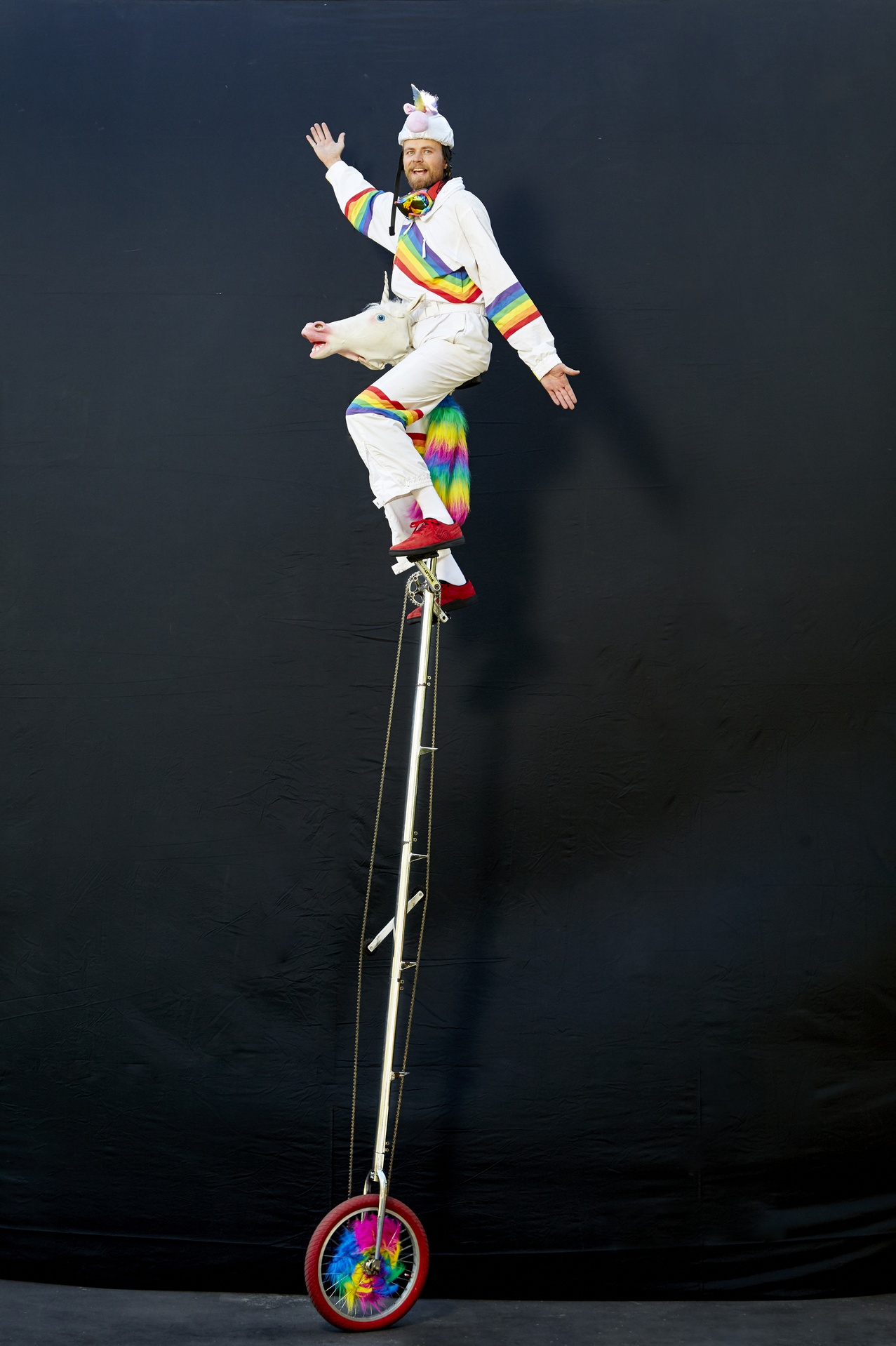 Despite the loss of one, the festival going ahead is poised to offer a fresh and engaging experience for attendees.

“It’s bringing vibrancy to the streets,” says Milton. “It’s a free event for all ages. It appeals to everybody.”

The Downtown Victoria Busker’s Festival has wrangled a number of internationally renowned headliners, including Beat the Streets, a dance crew featured on "Australia’s Got Talent", and Duo Looky, an acrobatic comedy duo travelling all the way from Israel.

Ian Piears, the Downtown Victoria Business Association’s cultural outreach manager, says Beat the Streets is one of the acts he’s most excited about bringing to Victoria’s streets. “I’m a trained professional dancer, so Beat the Streets are the highlight for me.”

And if you look to the sky, you’ll see Jamey Mossengren, a.k.a. The Unicycling Unicorn, who’ll be rolling into town from Los Angeles, California, on a 12-foot unicycle.

A seven-time world champion unicyclist, Mossengren has made street performing his full-time job for about eight years.

His current routine has him dressed in a white jumpsuit covered in rainbows, with a unicorn mask adorning his unicycle.

“It’s a bit silly, but it’s fun to be a bit different, and I’m hoping this will set me apart from all the other unicyclists,” Mossengren says. “So far, I think it’s working pretty good.”

That’s not to say the festival won’t be featuring local talent, of course. Performers from Victoria and all across Canada will be here to entertain tourists and locals alike.

Piears points to the roster of fire performers set to heat things up down at Ship’s Point, including FireGuy, Bex in Motion, and Billions Cobra — all from Toronto, Ontario.

“As it gets dark in the evenings, it will be amazing for some of the fire shows down there, to visually light up the inner harbour,” Piears says. “I’m really excited to see the visual performances.”

Beyond silly
And if you can’t take the heat, no sweat; there’ll be plenty of musical performances to take in, including local bluegrass legends, the Clover Point Drifters.

Larry Stevens, who plays dobro in the Drifters, says they’ll be bringing the same wit and good humour that’s carried them along for 17 years. “We like to kid around on stage, and that’s why most people like us, because we’re always smiling,” Stevens says. “We connect really good with crowds, and the material we do is enjoyable.”

That connection can make or break a performance—if you can’t engage with your audience, you’ll be left with an empty hat at the end of the show. It’s a struggle that both Mossengren and Stevens know well from their time performing.

“The worst is when you do a show, and people are having a good time, you think, and then you stop and stand there with your hat and half the people leave without even saying thanks,” says Mossengren.

Mossengren recounts his first show in Huntington Beach, California, as the moment he questioned if he was cut out for the hustle of street performance. “I was working my ass off just doing all these super hard tricks,” he tells me. “But I wasn’t a performer, I wasn’t connecting with the audience, and I wasn’t making them laugh. So I worked for about an hour and made, like, two dollars, and I’m like, ‘OK, I’m packing up.’”

But one fateful encounter at the end of his performance changed everything.

“As I’m packing up, this old lady came up to me and gave me a twenty dollar bill and said, ‘I’ve been watching you, you’ve been working really hard. Keep doing what you love,’” Mossengren says.

“If it wasn’t for that lady, I might not have tried it again,” he continues. “All it takes is one person to change your life and the path you take, and she’s the one that did it.”

Stevens says when he first moved to Victoria, he took up busking as a way to make ends meet. “It’s a little tough because it’s more like a job,” he says. “You’re thinking, ‘Oh, do I have enough for a box of Kraft Dinner?

Raw theatrical magic
Struggles aside, both Stevens and Mossengren say it’s a magical thing when you get through to an audience.

“You’re looking out and you’re just seeing tons of people smiling and laughing and you get that energy from ‘em, that positive energy,” Mossengren says. “You give them a good show and it’s like a natural high. It’s an amazing feeling.”

“Busking, I find kids are really great to play for,” Stevens says. “I just love watching them dance around having a good time. It’s great, I enjoy that sort of thing.”

Central to the festival this year is the ‘pitch stop,’ pop-up performance locations that will be interspersed throughout the downtown core. “A pitch stop is traditionally where a busker would perform,” Piears explains.

Piears says the pitch stops are part of a conscious effort to connect the festival to the historical roots. “It’s just stripping the whole festival back and not having seating or any kind of auditorium. The joy about busking is that you might stumble upon it, and then you might watch the whole act or you might move on. It’s the job of the performer to engage and pull you in and make you stand around, and that’s kind of an exciting thing as an audience member.”

But it’s one thing to watch a performance. What about being in the middle of it?

Watch a magician or juggling unicyclist long enough, and you may find yourself picked from obscurity to be a part of the show. Mossengren is no exception.

“I get [my volunteers] to mainly hold the tall unicycle, so I want stronger guys and, you know, taller guys usually work out better,” Mossengren says. “But I also look for people that are smiling, having fun.”

Don’t think being the most enthusiastic volunteer will guarantee being picked, though. “You want that awkwardness and nervousness … I just try and avoid those people because they’re looking for attention, and they can screw up the show sometimes,” Mossengren says.

Instead, it’s the ones who are begrudgingly thrust in the spotlight that make for a better performance. “We’re looking for people like that where they’re not perfect, and make mistakes and get embarrassed,” Mossengren says, “because the crowd feeds off of that and you can make a lot of comedy out of stuff like that, because they’re just glad it’s not them.”

Eclectic arts scene
Whether it’s high-flying unicycle acrobatics or upbeat musical numbers from local legends, the Downtown Victoria Busker’s Festival has a lot to offer when it kicks off July 11. “We have a very eclectic arts and culture scene here in Victoria,” says Milton.

“And what’s great about busking is it covers all genres, all types, all kinds of quality of entertainment, as well as a much greater variety. Which is exactly what Victoria’s arts and culture scene is about, right?”

“Check us out. See what you think. If nothing else, it’ll be entertaining.”