Since Drew Dennis started working as Out On Screen’s first staff member in 2000, the fabric of queer life has changed dramatically. “We didn’t have marriage equality,” Dennis remembers of the early 2000s. “We were just barely starting to see stories of folks starting to explore their gender identity. [The now-10-year-old anti-homophobia and transphobia initiative for high school students] Out In Schools was not yet even a seedling of an idea.”

The milestones since 2000 are bittersweet. While they mark inspiring, significant steps towards equality, they are frustratingly recent advances following a long history of struggle and individual suffering. That same-sex marriage was only legally recognized in the United States this summer demonstrates the strength of the oppression at the heartof every civil rights movement.

When Canadian Parliament passed the Civil Marriage Act in July 2005 to give same-sex couples the legal right to marry, then-Conservative Leader Stephen Harper pledged that he’d revisit the law if his party formed government. Now that he’s Prime Minister, Harper has oddly kept quiet about the Marriage Act, but he’s never once proclaimed that queer Canadians deserve the same rights as everyone else.

Here in Vancouver, however, the municipal government has spearheaded many recent gains. The progressive Vancouver School Board adopted revisions to its sexual orientation and gender identity policy last year amid vocal objections from parents. And this summer, the City of Vancouver formed a new Trans* and Gender Variant Inclusion Steering Committee six years after the inaugural meeting of its LGBTQ2+ Advisory Committee.

“We still have a lot more work to do,” Dennis, who co-chairs the new Trans* and Gender Variant group, says. Through it all, Out On Screen—the non-profit that runs the Vancouver Queer Film Festival and the Out In Schools anti-bullying program for high schools—has been one of Canada’s leading champions for celebrating and advancing gender and sexual diversity. Out In Schools has been presented in over half the school districts in B.C., and every year, the film festival has grown. What began as a small screening event among friends in 1988 has grown into the largest film festival in the city, second only to VIFF.

“The festival’s a place where we can feel affirmed, where we can reconnect with each other, where we can see ourselves onscreen,” Dennis says, adding that early films about gender identity in the early 2000s inspired many trans or gender creative audience members to start sharing their own experiences in film. “I think that the role that the festival’s played in Vancouver’s cultural development, particularly within our trans and queer communities, has been a really important one.”

Last month, Dennis worked their last day with Out on Screen, marking the end of 15 years of work as the non-profit’s first full-time staff member. They sat down with Megaphone to reflect on their leadership to advance public dialogue about queer life through film. 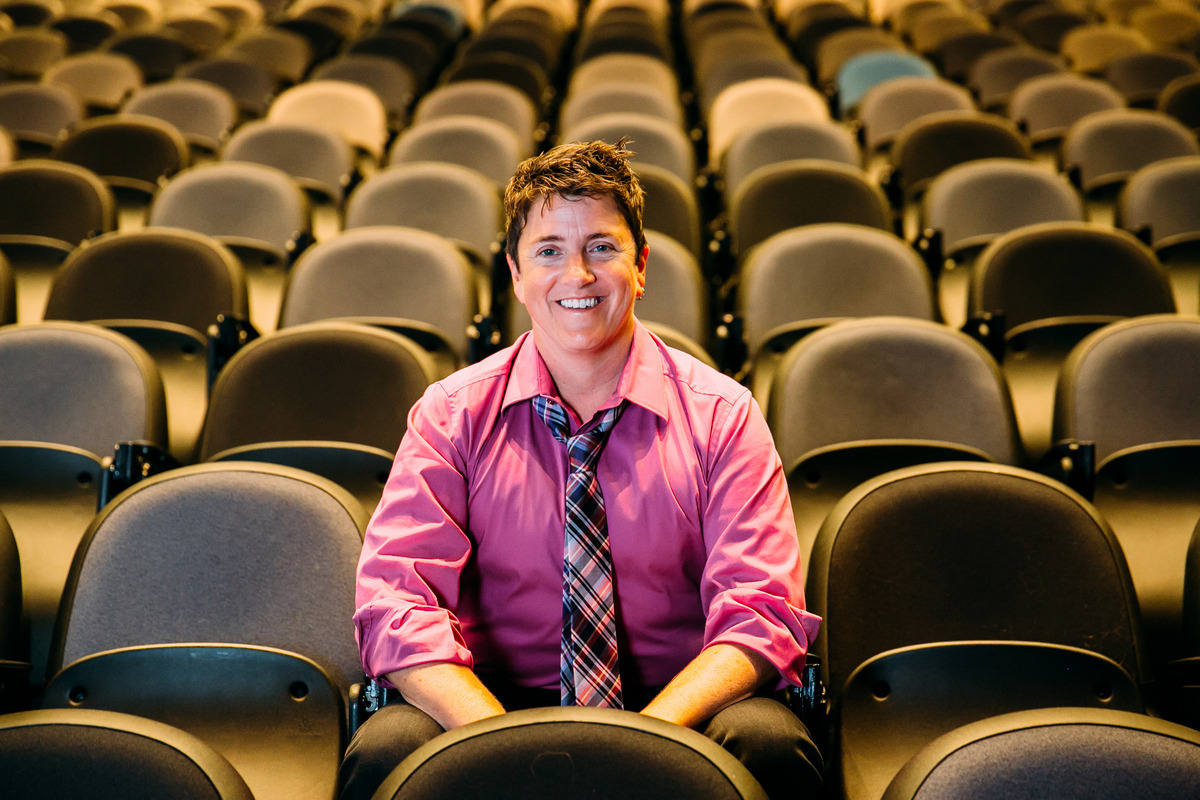 On the early days of bringing trans experiences onscreen:
“In some of those earlier years, we did a partnership with Video In, Video Out [now VIVO Media Arts Society]. [Noted Vancouver author, speaker, and performer] Ivan E. Coyote made one of their first short films through a co-production with the film festival where Ivan talked about their own gender identity. We also had films from James Diamond and other folks who were starting to explore their gender identity—they were either out or in the process of transitioning. Those were some of the early voices in Vancouver.

“We’ve had community members who have been inspired by those films, and who have picked up a camera and made their own story. Gwen Haworth attended the festival [she’s now part of Out On Screen’s Board of Directors]. She’s the director of [the award-winning documentary] She’s a Boy I Knew: that film was inspired from attending the festival.”

On the evolution of Out in Schools:
“Out in Schools is celebrating its 10th year this year. We’ve presented in a little more than half of the [school] districts in the province. We use the characters and storylines in a film to bring about a conversation in the [high school] classroom. The students talk about what’s happening amongst their own peer groups, what’s happening in their school.

“An added element of Out In Schools that we’ve been able to develop over the years is our Rise Against Homophobia youth video initiative. It’s really creating the pathway for youth to be empowered to be agents of change. It’s generally a group of students who create these wonderful public service announcements around anti-homophobia and anti-trans phobia.

“They’re 30- to 60-second films. They’re able to show them to the rest of the school, or amongst their friends, and they go viral online. It’s been really powerful. We’ve seen some youth that then get inspired and start picking up a camera and making other films.”

“Earlier this spring, we spent time in schools up in Comox valley, Haida Gwaii and Prince Rupert. It was a fantastic time. More and more, we’re prioritizing reaching out to those rural communities. Teachers don’t necessarily have the same access to resources as their urban counterparts.

“Our team had a great time, particularly in Haida Gwaii—such warm, embracing communities. The community [in Haida Gwaii] was grappling with the recent suicide of a young person within the community.

"I think it was really timely that Out In Schools was able to be there in that moment and to really help guide students while they grappled with this really significant loss.

“I think it’s easy to assume different stereotypes or generalizations, whether it’s around that rural-urban divide or sometimes within particular communities. More often than not, we find when we go out into these smaller communities, that myth is really debunked.”

On how government policy impacts real life:
“[Last year], the Vancouver School Board approved an updated sexual orientation and gender identity policy, which is really a leading example, I think, of what a really solid, pragmatic policy can look like.

“But we still have about a third of the [school] districts in the province without any policies. And then there are those that are more specific to the “L” and the “G,” the gay and the lesbian aspects, but don’t really provide pragmatic approaches around how [educators can] best support students, particularly young studentswho are trans or gender creative.

“[With Out In Schools], it’s rare when we have any pushback from [smaller, rural] communities. An exception to the rule is that there were a couple of parents that had voiced some concerns after we had left Prince Rupert. But what was wonderful to see was that the administration really stepped up and we were able to point to their policy.

“Prince Rupert is within a [school] district that has an LGBT policy. I think that [moment] is a great example of how policies can really help support the work on the ground.” 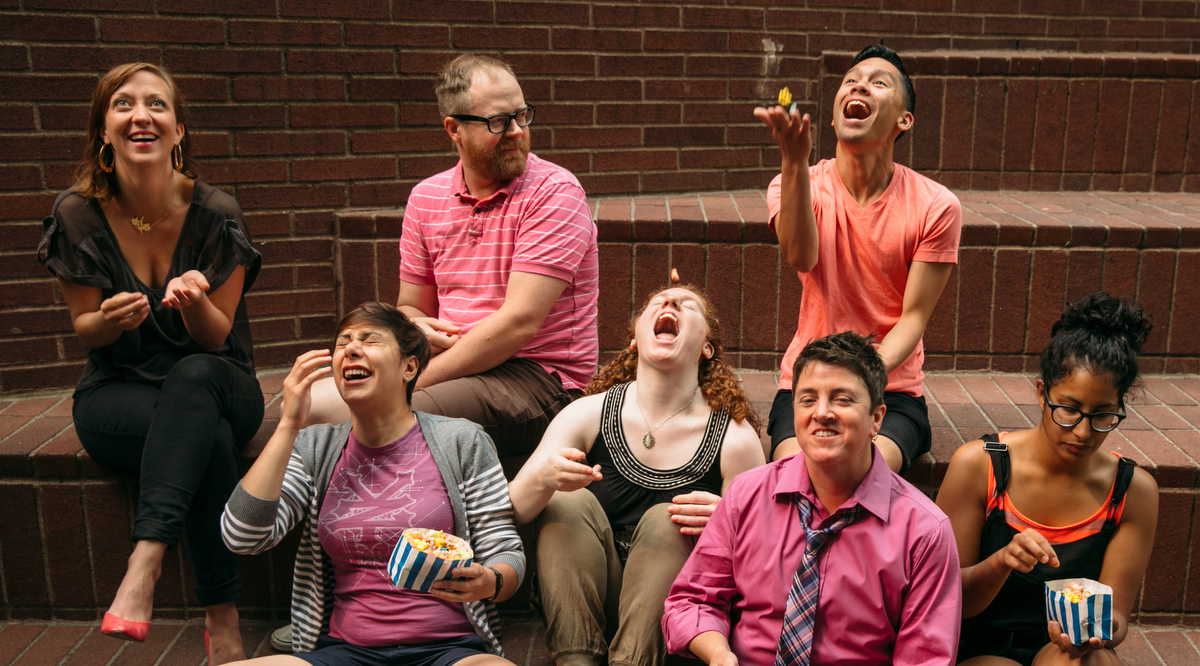 On how generations are changing:
“While kids are generally pretty comfortable around sexual orientation, I think the most significant change we’re seeing within the last five years is that we’re seeing kids at very young ages start to come out as trans.

“I think there was a time when parents and educators didn’t want to deal with that, or the answer was to restrict the child in the gender that they were born in.

“Now, the conversation is shifting amongst educators. The conversation that we’re hearing is, “How can we help these students? What do we need to do?” And I think everybody is trying to run as fast as they can to actually catch up to where the students are today.

“Students are able to access information much more quickly—in ways that my generation wasn’t able to. We see many more LGBT positive role models now.”

On life beyond Out On Screen:
“I’m looking forward to a pause and re-imagining possibilities. I know I’m really committed to continuing to advance LGBT [issues], particularly trans inclusion, within the city and beyond. I definitely will continue to be a strong and avid supporter and cheerleader of Out On Screen!

“I serve on the [City of Vancouver’s] LGBTQ Advisory Committee to advise city council. We have a fantastic group of people. It’s a great way for people to get involved and engage within their city.

“It first felt surprising to me that there was a possibility to have such an active voice within City Hall. That’s the type of empowerment that we want to encourage others to recognize: that they can have a voice, particularly within municipal government. Municipal issues are the issues that affect our lives most directly.”

The Vancouver Queer Film Festival runs Thursday, August 13 to Sunday, August 23 at a variety of theatres across Vancouver. General-admission tickets are $12. “We’re one of the only events in town that offer senior, student, and under-employed ticket prices for $8,” Dennis says. For showtimes and info, visit QueerFilmFestival.ca.