join us donate
LOG IN or SIGN UP
Liquid syntax error: Error in tag 'subpage' - No such page slug join
find a vendor
April 02, 2012

Carnegie Carnage: Is this your last chance to read the Carnegie Newsletter? 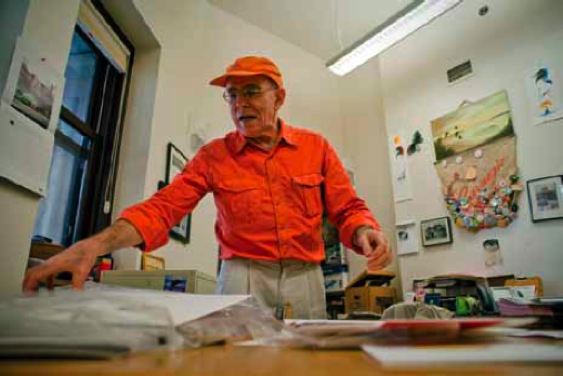 Paul Taylor is the long-time editor of the Carnegie Newsletter. Photo by Justin Langille.

Issued twice-monthly and organized entirely by volunteers, the Carnegie Newsletter is one of the Downtown Eastside’s oldest independent media outlets at 25 years running. But it’s pulling its last copy off the presses next month thanks to a cut to their provincial gaming grant.

“[The government] just looked at it like a Carnegie Centre staff newsletter, I guess, never having seen one, and just dismissed it,” says Paul Taylor, the long-time editor of the newsletter.

“It’s been a voice for the community for 25 years, and the reaction to this has been outrage that someone could be so blind or ignorant.”

The publication, which usually runs 16 to 28 pages long, is an outlet for Downtown Eastside members' poetry, writing and graphic art, as well as a place to announce upcoming meetings and events of interest to the community. But the newsletter also tackles heavier issues, problems that plague the community ranging from addiction, homelessness and the sex trade to free trade, gentrification and violence against women.

Each issue costs the Carnegie Community Centre Association $500 to publish with an annual cost of $12,000. The B.C. Gaming Commission previously covered $10,000 of that, with the rest made up from private donations. But when the grant for the 2011/12 fiscal year came through, there was no funding for the newsletter.

A spokesperson for the Ministry of Community, Sport and Cultural Development told Megaphone there was never a specific grant for the newsletter, rather it has always been up to the Carnegie Community Centre Association to allocate the funds given by the Ministry through the Gaming Commission. This year it was $56,500, approximately $4,000 less than the year before.

“The Carnegie Community Centre Association’s $56,500 Community Gaming Grant for 2011/12 reflects how their grant request related to the cost of the specific programs they offer,” reads an emailed statement from the Ministry.

Taylor says government’s allocation defense doesn’t hold true, however, as the Centre’s application asked for funding for four programs, including one program for the newsletter and community outreach.

“The funding regularly allocated to the ‘communications' newsletter, informing the community’ was reduced to zero, and the two programs approved for funding had their allocations increased. It’s a very back-handed way of cutting all money to the newsletter, with the reason being it’s not even being recognized as anything more than something run off on a photocopier or sent via email,” Taylor says.

“The analysts at the Gaming Commission apparently saw no need to fund that as a program, saying instead that any money required to print a Centre ‘newsletter’ could be gotten from the various aspects of other programs.”

In the meantime Taylor has accrued enough money through donations to put out one paper for March and another on April 1. The Centre is currently reapplying for newsletter funding from the Gaming Commission, but Taylor says if it doesn’t come through, it’s curtains for the newsletter.

“We would need to find annual funding, and we can’t rely just on small donations, because most people in this community don’t have money to donate,” he says.