join us donate
LOG IN or SIGN UP
Liquid syntax error: Error in tag 'subpage' - No such page slug join
find a vendor
January 25, 2019
by Emi Sasagawa follow this author
photos: TOP: KIINALIK: THESE SHARP TOOLS IS A CONCERT, CONVERSATION AND MULTIMEDIA PERFORMANCE ALL IN ONE. JEREMY MIMNAGH PHOTO. Right: Selina Thompson in salt. Byrony Jackson photo.
feature

Celebrating the weird, elevating the mundane 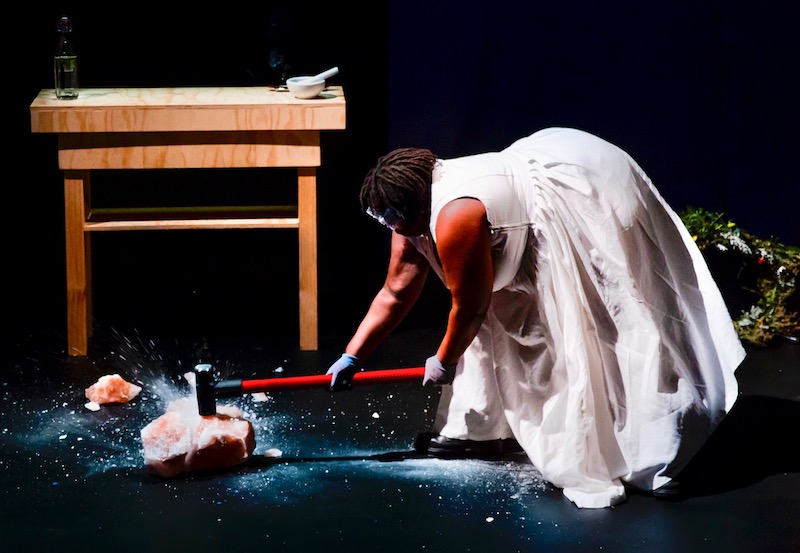 Vancouver's PuSH festival has been pushing the performing arts envelope for 15 years.

When a festival called PuSh launched in 2003, it began as a three-show series that drew 2,500 people to 21 performances at three venues. During its ensuing 15 years, the event has welcomed more than 300,000 people to 366 productions from 30 countries. And throughout this time, PuSh’s eclectic and expansive work has helped open audience minds to new possibilities and perspectives.

“The world has changed, technology has become more advanced and it’s not necessarily that the art has become more innovative, but we’ve been able to see more of it—different expressions, forms, concerns coming from a wider range of artists from other places in the world,” says Joyce Rosario, interim24 / Change that Works artistic director for the festival. This year, the PuSh International Performing Arts Festival marks its 15th annual edition, with performances taking place at venues across the Lower Mainland.

Held from Jan. 17 to Feb. 3, 2019, this year’s edition of the festival is the final iteration guided by the vision of Norman Armour, one of PuSh’s co-founders and former artistic and executive director, who stepped away last year. He says the event will continue to push boundaries.

“In 2019, we bring audiences face- to-face with a broad range of thought- provoking works that subvert the dominant narrative by changing whose perspectives we are centred on,” says Armour.

While controversial topics in the public eye have shifted over the years, some themes—such as moral conscience, consequence, love and redemption— remain constant, according to Rosario.

“I took a look at PuSh’s first festival program in 2005 and the work still feels relevant,” she says. “A couple of works that stood out that year were Neworld’s production of Crime and Punishment and Nigel Charnock’s FRANK. Those works absolutely stand the test of time, but today working with community participants is much more common, as are works that blur the boundary between disciplines.”

Rosario says she can’t help but think of the role the internet and social media play now as compared to 2003.

“Of course, what might have been risky then feels very different now in the time of #metoo #timesup #trump #brexit, etcetera, and conversations that were at the edges, for some, are now at the forefront for us all... I’m thinking about our relationship to Indigenous issues here in Canada and movements like Black Lives Matter,” she says.

“Works that use the latest technologies will always be cutting edge for their time. What is different today is that we get to see more kinds of work and much more nuanced perspectives.”

This year’s PuSh festival excels in breadth. With 26 works from 24 companies from 13 countries, Rosario says she and the PuSh team hope to ignite important discussions about the world at-large. Here are a few highlights:

• salt. by British performer Selina Thompson will be at the Roundhouse Performance Centre from Jan. 24-26. It's the Canadian premiere of this one-woman show retracing the transatlantic slave route, which connected Africa with Europe and the Americas. It was the transport route for innocent masses kidnapped in the name of racism and greed. To research for this performance, Thompson got aboard a steam ship and journeyed from Britain to Ghana to Jamaica and back. In this gripping performance, Thompson recounts her journey along one stretch of the route by cargo ship.

• In addition to salt. Thompson is also bringing an installation called Race Cards to the Roundhouse Exhibition Hall from Jan. 23 to Feb. 2.

“Why do people assume that racism will just passively die out if we wait long enough?”

This is one of 1,000 questions that Thompson has composed and put on cards. In this installation, visitors will read as many of them as they wish. They are then instructed to answer one card and copy one to take away with them. 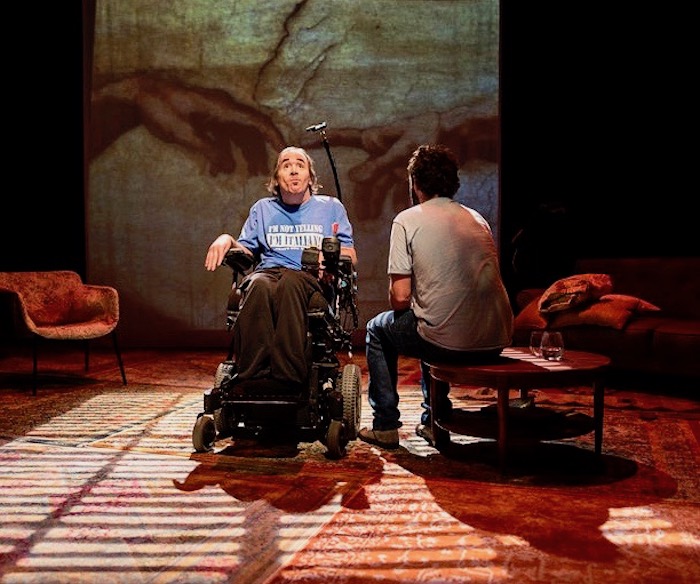 • This is the Point by Ahuri Theatre (pictured at right) will be presented at The Cultch from Jan. 29 to Feb. 2. This “play about love, sex and disability” runs the gamut from joyous celebration to unflinching drama as it paints a collective portrait of real-life individuals whose lives have been touched by cerebral palsy. Questions of representation, the nature of companionship, whether people of different abilities can ever connect on equal terms—all are explored here.

• Kiinalik: These Sharp Tools, a work by Toronto theatre company Buddies in Bad Times, will be presented from Jan. 30 to Feb. 2 at Performance Works. A concert, conversation and multimedia performance all in one, the work is a meeting point for two people—Inuk artist Laakkuluk Williamson Bathory and queer theatre-maker Evalyn Parry—and two places, Canada’s north and south. The two performers met on an expedition trip, going to the north, where they connected as storytellers, songwriters and feminist women. This will be the performance’s Western Canadian premiere.

• ZVIZDAL (Chernobyl – so far so close) by Antwerp-based art collective BERLIN will be at the Roundhouse Performance Centre from Jan. 31 to Feb. 2. Antwerp-based art collective BERLIN and journalist Cathy Blisson spent five years filming Nadia and Pétro Opanassovitch Lubenoc, an elderly couple living deep within the irradiated Chernobyl exclusion zone in a place called Zvizdal. This deeply affecting documentary-installation is a portrait of loneliness, survival, poverty, hope and unconditional love. This will be
the performance’s Canadian premiere.

This edition of PuSh has a number of no-charge performances, including free opening and closing night parties.

X Marks the Movement will be held at The Beaumont Studios. By queer Filipinx artist Kimmortal and art-fashion-dance collective Immigrant Lessons, the show plays with the concept of map-making in order to reframe narratives of home and diaspora.

Triple Threat by British artists Lucy McCormick closes the festival on Feb. 2 at XY. McCormick presents a trash-punk morality play made for the modern world. She plays all the main roles in this subversive spin on the life of Jesus, which covers everything from the immaculate conception to the resurrection.

In addition to innovative entertainment, the festival is hosting the Youth Assembly, a one-day free performing arts conference just for young people. Held on Jan. 19 from 11 a.m. to 5 p.m. at the Djavad Mowafaghian World Art Centre, the assembly connects young people and emerging artists between the ages of 16 and 24 to help them experience the world of the performing arts.

“One of the other unique things about the PuSh Festival is partnerships. The basis of so much of our programming is partnerships with other organizations,” notes Rosario.

“As a multidisciplinary festival, PuSh fills in the cracks. It celebrates the weird and elevates the mundane. It makes the ordinary extraordinary. It's this kind of trying to apply a different lens of seeing the world around us that I think is so important to what we do and what makes it unique,” says Rosario.

For more information, including performances and showtimes, visit pushfestival.ca.