join us donate
LOG IN or SIGN UP
Liquid syntax error: Error in tag 'subpage' - No such page slug join
find a vendor
March 12, 2014 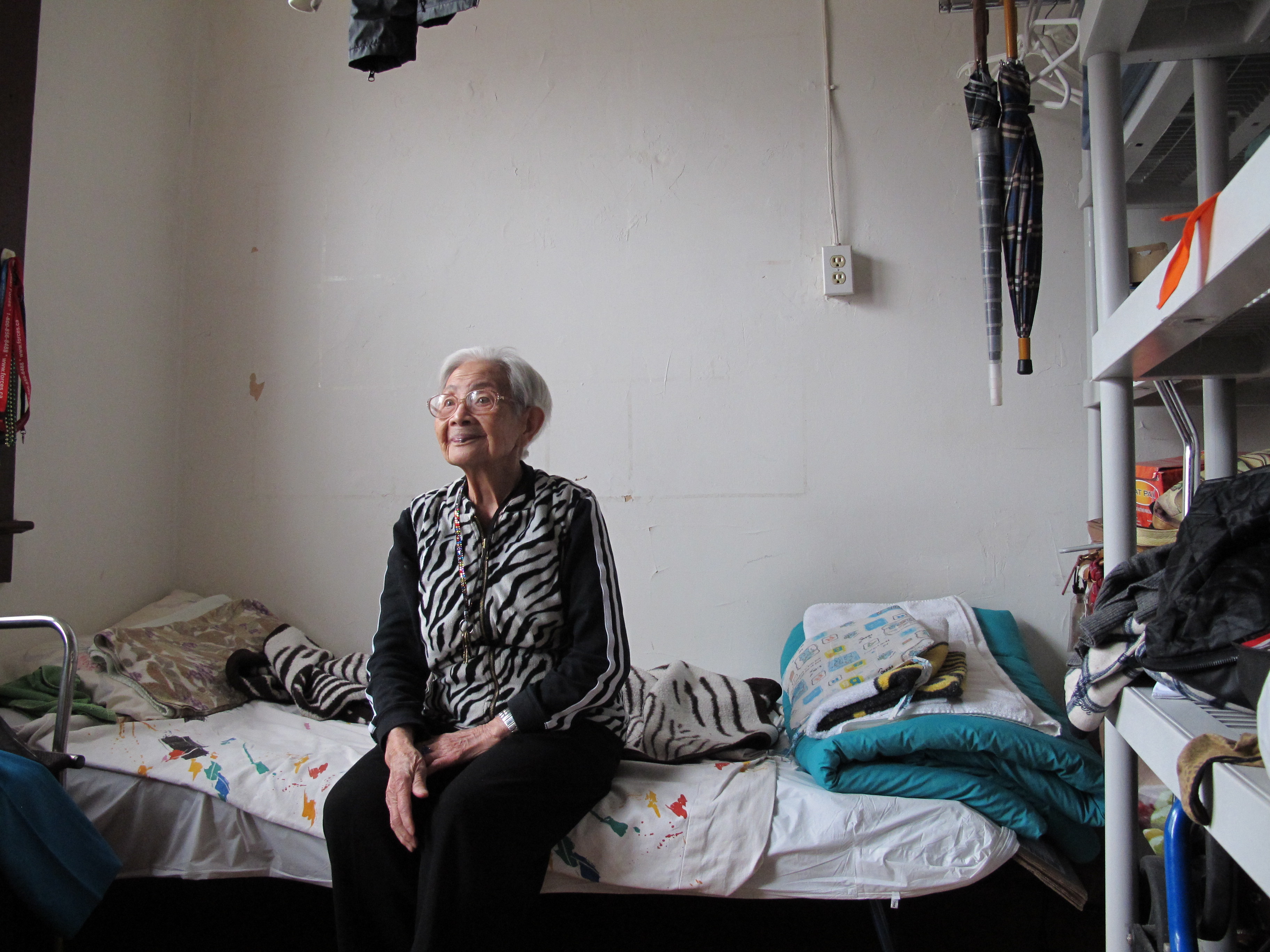 Rosesari Rosesari in her room at the May Wah Hotel, a privately owned single room occupancy hotel in Vancouver's Chinatown. She pays $320 a month. Her neighbours on the same floor pay $200 to $290 a month.
Photo by Jackie Wong

“Ni hao,” says a red painted wall on the southwest corner of Main and Keefer. The enormous particle board inscription is an English phonetic spelling of “hello” in Cantonese, part of an advertisement for a coming condominium development in the rapidly upscaling Union-Keefer-Georgia radius between Main and Gore streets in Chinatown. The inscription has the unintended effect of mocking the people crowding the bus stop below. Most of Chinatown’s Chinese residents can’t read or speak English, nor can they afford what the developers call “achievable home ownership” at 1888 Keefer St. Obviously, the condo advertisement is not for them, though it pretends to speak their language.

What gets lost in translation is that despite the new condo towers, restaurants, and coffee shops catering to a new class of English-speaking residents and workers in the neighbourhood, Chinatown’s longest-standing residents are barely holding on to their homes in a part of the city that has been central to their lives and family histories in Vancouver.

Recent flashpoints, like the city-ordered demolition of the Ming Sun Benevolent Society headquarters in December and the 30-40 per cent rent increases served to elderly residents of the Chau Luen Tower on Keefer Street earlier this month, are signs of the precariousness facing Chinatown’s predominantly elderly Chinese-speaking residents. The population is already on the margins because of their poverty, their language and their age.

The B.C. Residential Tenancy Branch recently ruled against the landlord’s attempts to raise the rents at the Chau Luen, marking a victory for the renters who would have otherwise been priced out of the building and, ostensibly, the neighbourhood.

But with recent reporting from the Carnegie Community Action Project that there are no more rooms renting for the monthly $375 shelter allowance rate for people on income assistance, and with a 30-year Local Area Plan to be passed for the Downtown Eastside (DTES) next month, Vancouver’s Chinatown persists as a contested space.

The neighbourhood lies at the nucleus of the city’s ongoing tensions around housing affordability, racialized discrimination, access to services and questions about who has the right to the city.

The cost to rent an office or retail space in the east side of the city is more affordable than renting spaces in the central parts of downtown or the city’s west side. So it makes sense that Chinatown, an historically working-class ethnic enclave, is sought-after territory for Vancouver’s creative class and upmarket professionals. The change in the neighbourhood is a hot conversation topic among Vancouverites, but the experience is not this city’s alone. Chinatowns across North America are undergoing similar transformations. In the United States particularly, community organizers are raising concerns about the impacts that gentrification will have on Chinatowns' original reisdents.

Last year, New York City’s Asian American Legal Defense and Education Fund (AALDEF) embarked on the United States’ first multi-city Chinatown land-use study to compare Chinatowns in Philadelphia, Boston and New York City. The results, published in a fall 2013 report, are strikingly applicable to local discussions: “Recent luxury and high-end developments in each city’s Chinatown have directly and indirectly threatened both current residents’ and future immigrants’ ability to live, work, shop, and participate in the community and cultural life of these historic neighbourhoods,” reads the report. The result, report co-author Andrew Leong told the BBC earlier this month, is “a sanitized ethnic playground for the rich to satisfy their exotic appetite for a dim sum and fortune cookie fix.” 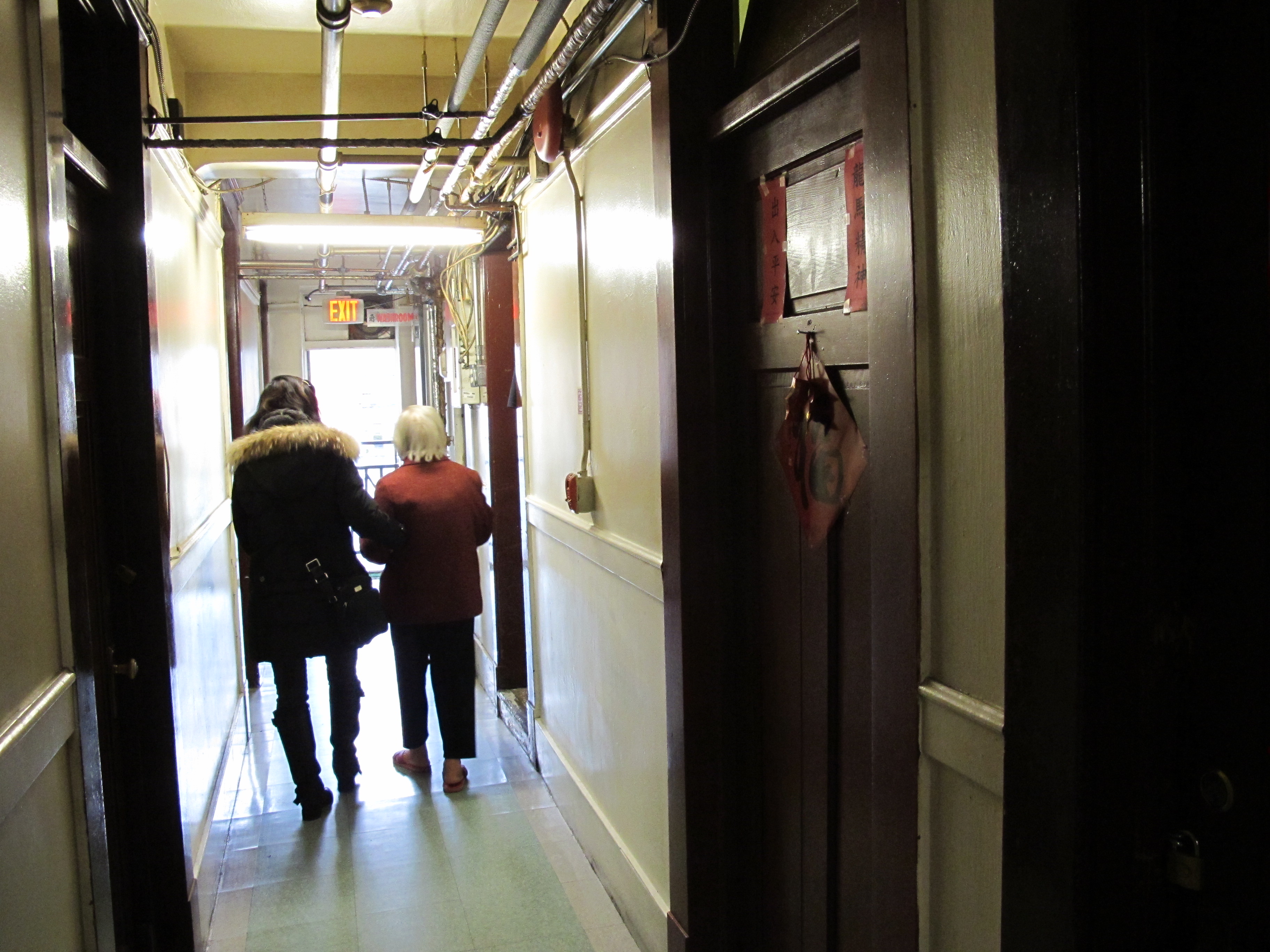 While Chinatowns across North America are facing similar uncertainties, cities differ in their responses to the concerns raised by community organizers about gentrification and its related evictions, affordability and accessibility concerns. That the AALDEF exists at all is evidence of a robust culture of multi-ethnic community organizing in major American cities.

In San Francisco, hundreds of housing rights advocates, spurred by the outreach work of the influential Chinese Community Development Center, threw their support behind an elderly Chinese couple threatened with eviction from their home near San Francisco’s Chinatown last fall. Community action against the eviction delayed their move-out date. And while the family eventually lost the fight to keep their home, a robust community of bilingual housing advocates worked with them to find them a new affordable rental apartment, a rare treasure that is arguably even harder to find in expensive, tech-booming San Francisco than it is in Vancouver.

Here at home, Vancouver’s lack of strong ethnic community organizing is evident in the relative invisibility of non-English speaking citizens in public conversation. That invisibility has consequences everywhere in the community, from the widely-felt and seldom-documented racism and discrimination experienced by Chinese-speaking seniors in DTES food line-ups to the quiet resignation with which many will submit to circumstances that English speakers, or people who are able to leverage more capital in society, would refuse to accept without a fight.

“Perhaps because of history, or because of the lack of community activism for the Chinese community and with the Chinese community, it plays out in terms of their response,” says King-mong Chan, a researcher and organizer for the Carnegie Community Action Project. Chan is one of only a handful of Chinese- and English-speaking bilingual outreach workers in the DTES. His work includes connecting with Chinese-speaking elders in the DTES and Chinatown to learn about their living situations, their housing needs and how they can be better connected to community services that will benefit them. 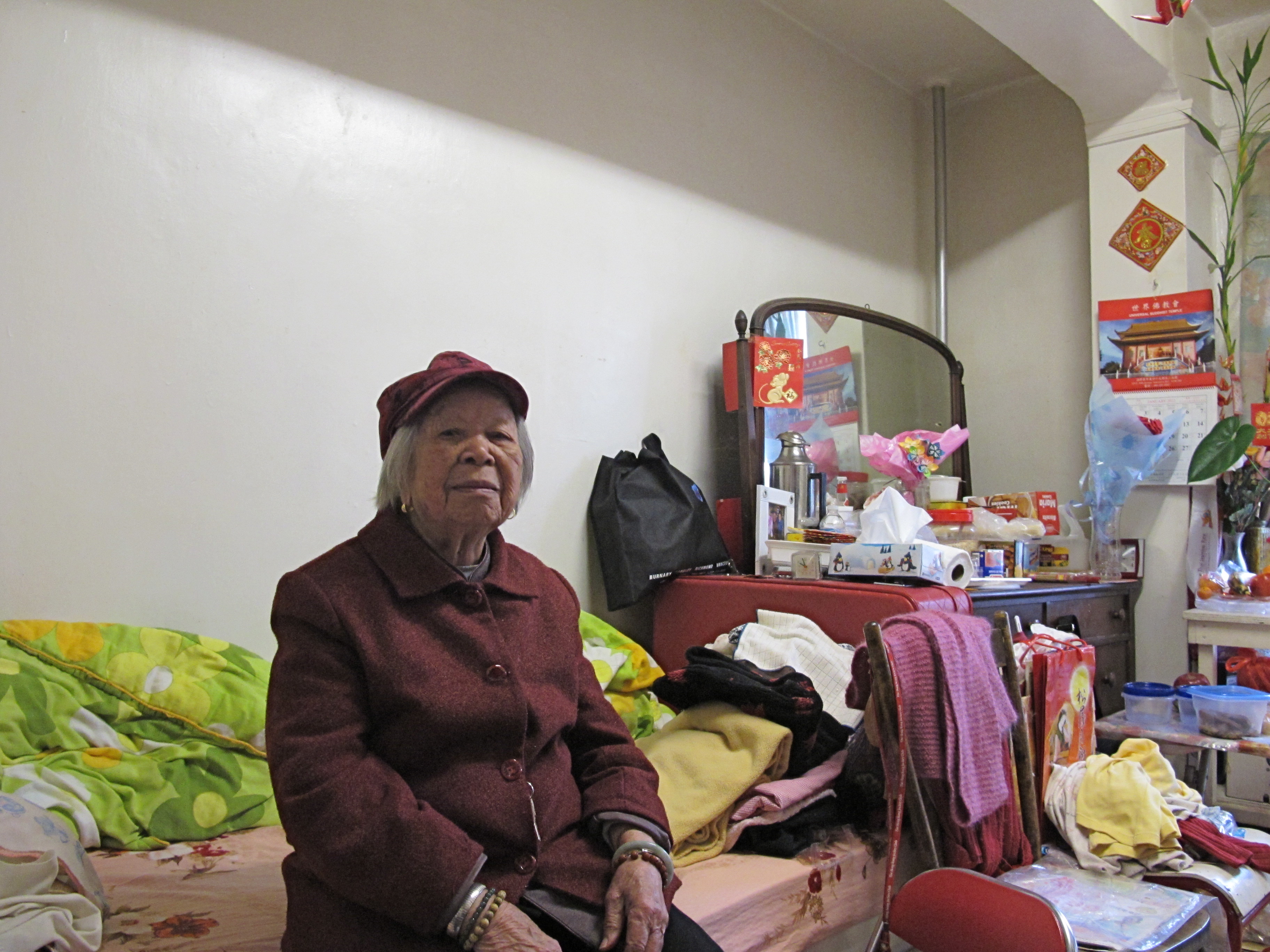 Gai Li Lin has lived at the May Wah for eight years. Photo by Jackie Wong.

Chan says he observes a disturbing complacency among the Chinese-speaking population that he doesn’t see as frequently among English-speaking residents of the DTES. “When I talk to them, they don’t have the money to buy certain food. So they buy cheaper food,” he says. “They’ll just sort of accept the fact they have less and less money to buy food as opposed to speaking out.”

I was told similar stories of the quiet resignation that comes from learning, over the span of a life, to live with less and ask for little while writing a series about Chinatown seniors last year for Vancouver's Tyee Solutions Society. “They'll force a smile to cover the pain and overcompensate for it, to reassure me that things are fine when I know they're not," Deanna Wong, the Downtown Eastside Women's Centre's Chinese seniors' outreach coordinator, told me. "They have my contact information. But a lot of times they won't want to trouble me for it.

To live with the assumption that there are no supports available is also historically rooted. The legislated racial discrimination that many Chinese citizens faced in their first years in Canada is still alive in the memories of the seniors who now live in Chinatown. Many of them still have racial epithets hurled their way on the streets; of the little research conducted on the Chinese-speaking seniors community in the inner city, racialized discrimination is a top challenge facing the population. Frontline workers like Wong, Chan, and others are well aware of it. The challenge, however, is creating action from awareness.

Creating a new sense of community

“Despite government considerations on how best to reconcile historical wrongs and discriminatory laws faced by Chinese-Canadians in the past, there remains a Chinese-Canadian population that currently experiences discrimination and neglect.”

So says a proposal co-written by Doris Chow, a frontline worker in the DTES. In collaboration with other community service organizations in the neighbourhood, Chow submitted a proposal to the provincial government in January to create a legacy fund to re-invigorate the Chinese benevolent associations that used to play a stronger role in contributing to Chinatown's social fabric.

The benevolent associations were originally established at the turn of the 20th century “to safeguard Chinese-Canadians from discriminatory legislation,” Chow says. Today, she says, “there’s this gap in services the associations can fill—and quite [culturally] appropriately, too.” She’s talking about gaps in housing services that could potentially be filled by benevolent associations that currently own Chinatown property but lack the capital to renovate it for community use.

The wide-ranging support speaks to a growing appetite to think about the Downtown Eastside and Chinatown in more integrated terms; a lack of coordinated service provision keeps the communities away from each other, even though its members rub shoulders all the time.

Change is happening quickly in the DTES and Chinatown. Next month, Vancouver city council will pass the 30-year local area plan for the neighbourhood. And the city is already considering leasing the site of the former Vancouver police station at Main and Cordova streets to a California tech firm, despite interest from community groups to use it as a hub for social innovation that serves the Downtown Eastside community.

These changes, of course, are not Vancouver's alone. They are, as the Asian American Legal Defense and Education Fund calls them in its Chinatown land-use report, “government policies accelerating gentrification.”

Even so, its authors acknowledge, “chinatowns have persisted as havens for low-income immigrants and workers, not only because of the continued need for affordable and culturally appropriate services and goods, but also because of the many people fighting to maintain their existence.”