Christy Clark and the Inner City: The premier says the Downtown Eastside is a priority for her government, but what does that mean in the premier’s “Family First” agenda? 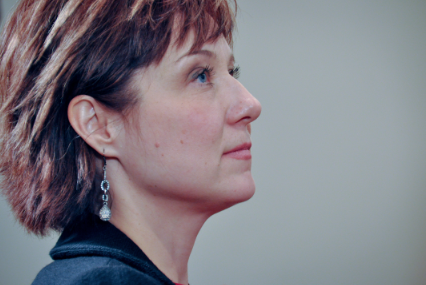 Premier Christy Clark has ridden her wave of success on a family first platform, promising to rebuild the province through effective leader- ship. But what exactly are her prerogatives to deal with the ongoing problems in Vancouver’s oldest and most notorious area, the Downtown Eastside (DTES)?

In an exclusive interview with Megaphone, Clark, who was elected party leader on March 14 and eventually elected as an MLA in Vancouver-Point Grey on May 12, was asked specific questions to uncover what the DTES community can expect from her.

“Addressing the issues in the Downtown Eastside is a high priority for this government,” Clark told Megaphone in an email interview. “That’s why we’re improving access to critical addictions services, investing more in housing than ever before and partnering with the City of Vancouver to create over 1,530 new units of housing.”

The 1,530 units will be at 14 sites in the city for the at-risk and homeless, according to Clark. The Burnaby Centre facility, providing care for addicts that fell through the cracks of the conventional health care system, will also see 100 new beds.

“The challenges in the Downtown Eastside are complex, and there isn’t one simple solution,” Clark said. “They require a broad approach that looks at a combination of supportive housing, addictions treatment, economic opportunities and community safety.” 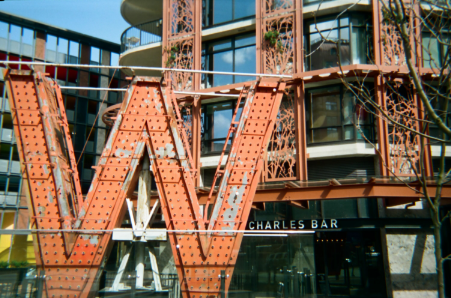 Clark also noted the previous commitments made by the government, such as the 24 Single Room Occupancy hotels in Vancouver equipped with more than 1,400 units. She said this year the government also invested $10-million in supportive housing. “I think this is a positive start, but there’s no doubt that more can and should be done to support all those living in the DTES and we’re working with our partners to reach those goals,” she added.

However, Clark did not answer Megaphone’s question asking for specifics on any policy, legislation or plans she and her party are considering for the diverse community.

When asked what the number one problem in the DTES is and how her government intends to address it, Clark answered:

“We’re taking real concrete action on a number of fronts to address the challenges of the community. Trying to focus on a single issue isn’t what’s needed in the Downtown Eastside, which is why we are working to build better access to housing, treatment and other vital services in that community and across British Columbia.”

Despite congratulating Prime Minister Stephen Harper on a majority government win on May 2, which is the same leadership that is trying to close Insite, Clark stands by the progressive safe-injection site.

“Studies show clearly and consistently that Insite prevents deaths and our government supports the B.C. Court of Appeal’s ruling that Insite is constitutional,” she said. “Safe-injection sites are a much-needed component of providing comprehensive services for vulnerable addicts.”

On May 6, Clark received some media attention as she strolled through the DTES with Vancouver Police Department officers. In a Global BC interview she mentioned how an enforcement approach to the area makes a difference for safety.

“I’ve committed to spending a day working in various jobs around B.C.,” she explained. “So far, I’ve served coffee in a community restaurant, and this particular visit to the DTES was on the day that I took a ride-along with the Vancouver Police Department as part of that initiative. I look forward to visiting the Downtown Eastside in the future and speaking to various organizations to get their perspectives on the community as well.” 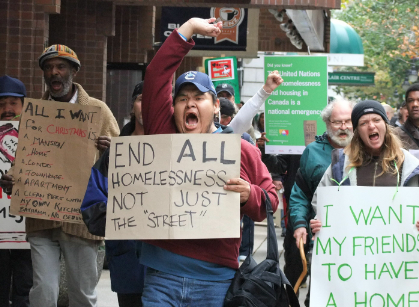 Clark also said her government tries to communicate and reach out to the various DTES community groups.

“Our government works closely with numerous housing providers and health agencies in the Downtown Eastside— reflecting the broad approach that’s needed to address the challenges facing the community,” she said. “We work in partnership with the city, Vancouver police, churches, the Carnegie Community Centre and Vancouver Native Health.”

However, Mark Smith, executive director of RainCity Housing and Support Society told Megaphone that as of May 25 he hadn’t yet met Clark.

“I’m not sure what I think about Premier Clark, and I really can’t speak for the Downtown Eastside community— it’s far too varied,” he said. “It’s difficult to ascertain precisely what her plans are, beyond the statements she’s made about families being important.”

Smith said he didn’t completely know what type of family she’s refering, whether it’s a traditional nuclear family, families of community or nuclear/extended biological families. Either way, he’s not clear on her dedication to ending homelessness.

“In terms of whether or not she is committed to ending homelessness, I just don’t know.”

One Downtown Eastside figure is more candid about her opinion of Clark.

“Christy Clark is an abolitionist. She supports the eradication of the sex industry,” said Susan Davis, development coordinator of the West Coast Cooperative of Sex Industry Professionals. “She chooses to ignore the facts and honours her own opinion over the truth. I think her complete disregard for the work police are doing with sex workers is disgusting.” 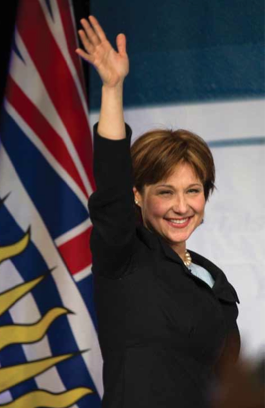 Davis has been an active sex worker for 25 years and disagrees with Clark’s previous statements concerning enforcement in the DTES. She said the police are taking a more positive approach with sex workers rather than resorting to force.

“Enforcement is not what is achieving greater trust between sex workers and police. Dialogue is what’s working,” she added.

Davis has debated with the premier before, when Clark hosted her own radio program on CKNW. Davis was on the show last September when an Ontario court decision struck down Canada’s prostitution laws. She had heralded the ruling as a step forward to provide protection to sex workers in that province.

“She yelled over me, insinuating I was supporting pimps and traffickers in the quest to gain rights and safety for my community,” Davis claimed (CKNW does not keep records online or in-house that are over four months old). “She does not have the experience or heart necessary to run this province.”

Davis is especially disappointed with the government after the recent decision to reject the recommendation to fund aboriginal, sex workers and other DTES groups in the upcoming Robert Pickton inquiry.

“One group commented [on May 25] at a press conference I attended that this government has reacted more quickly to the culling of dogs and the disappearing salmon than they have to the 32 unaccounted for women missing from the Downtown Eastside,” she said.

What the provincial government is doing now mostly came from decisions made by the previous premier and MLAs while Clark was hosting her CKNW radio show. Clark recognizes the DTES as one of B.C.’s leading issues that needs a solution. But with the legislature on break for summer, the community will have to wait longer to see what the government’s next move will be.

Please support our vendors and purchase a copy of Megaphone from them.