join us donate
LOG IN or SIGN UP
Liquid syntax error: Error in tag 'subpage' - No such page slug join
find a vendor
October 29, 2012 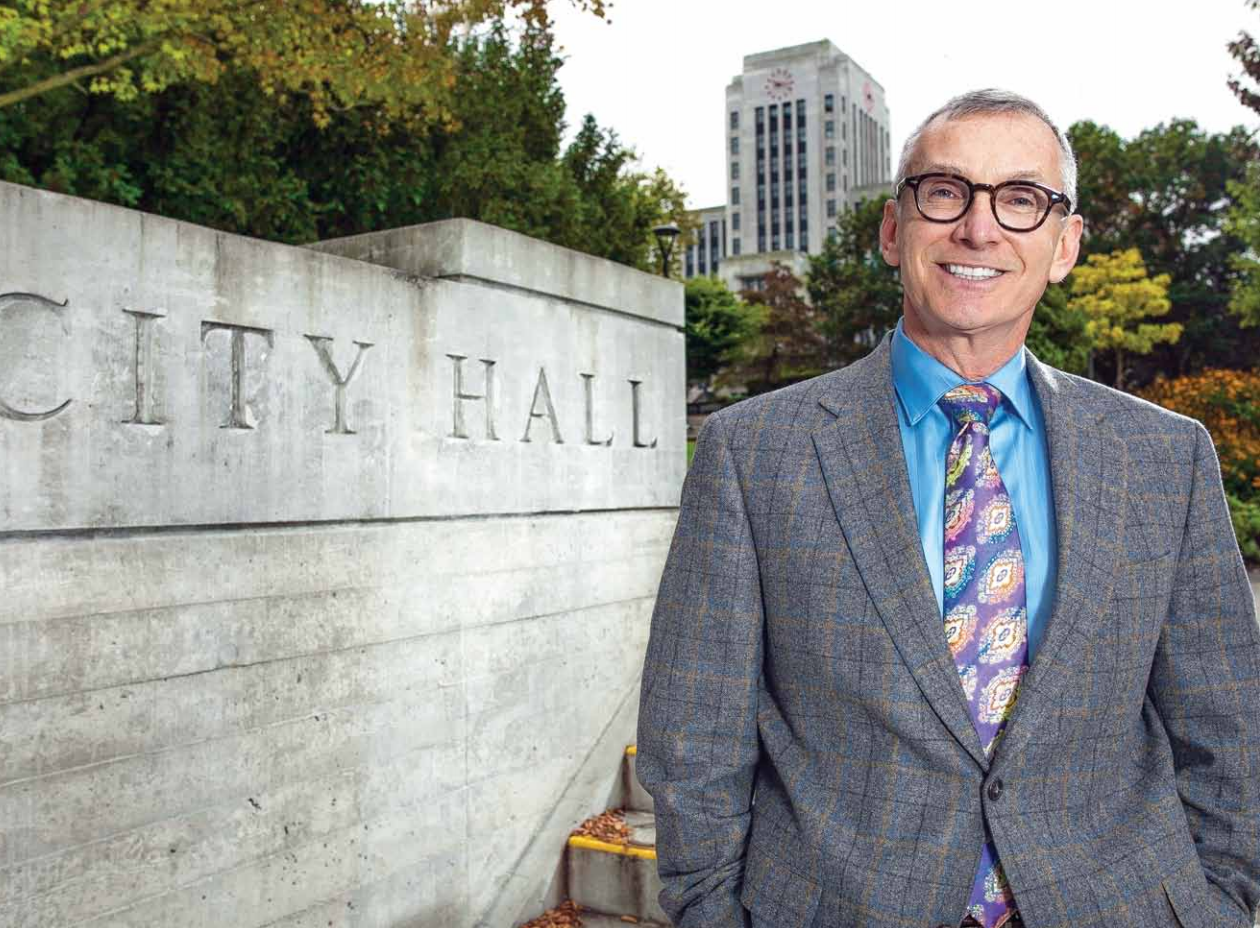 It’s the first day of October, and Brian Jackson is six weeks into his new job. It’s a position that some call the most influential one at City Hall: Jackson is the City of Vancouver’s new general manager of planning and development. Unlike the others who previously occupied his post as the director of planning, Jackson’s new role makes him part of the city’s management team, so he has a hand in shaping city policy in addition to how and where new development will take shape in Vancouver.

Jackson succeeds former planning director Brent Toderian, who was controversially fired in January 2012 after working as planning director for six years. This summer, the brass at City Hall picked Jackson out of 107 candidates to fill the position. He started work in Vancouver at the end of August after leaving a four-year position at the City of Richmond, where he worked as Richmond’s director of development, then acting general manager.

Today, looking at Cambie Street from the front lawn of City Hall, Jackson remembers how the Canada Line transformed his former Vancouver-to-Richmond commute. The Yaletown resident is now only two train stops away from his office. The proximity, he says, offers him more time to enjoy the city’s outdoor spaces.  An avid walker, Jackson says he loves to travel across the city on foot, taking in the sights and sounds of urban life from street level.

Sitting down for an interview with Megaphone, he shares his perspectives on housing affordability, density, how to manage growth, and his personal philosophies on city planning. Here are excerpts from our conversation.

Megaphone:  You’re starting your work with the City of Vancouver at a fascinating time in city history. The Mayor’s Task Force on Housing Affordability recently released its final report. Meanwhile, hundreds of members of neighbourhood groups have been jamming the speaker’s list at City Hall over the last four years, many of them harshly criticizing the current council for coming up short on building and protecting affordable housing stock. How do you plan to address housing affordability in your work as the general manager of planning and development?

Brian Jackson: I’m very excited about working with the recommendations of the Affordable Housing Task Force. I think that they’ve made some very concrete recommendations and set a framework for what they believe should be addressed to increase the affordability of housing in Vancouver.

Clearly, it’s an issue that has to be addressed. I’ve got a niece and her partner who make $80- or $90,000 between them and they can’t afford to live in Vancouver. [Ed’s note: they live in Burnaby.] So it’s very personal, but it’s also professional for me in terms of wanting to help plan a city that provides a diversity of housing types for all income groups.

We’re going to be working very quickly to implement the top priorities of the task force, including the 20 pilot projects for affordable housing throughout the city, as well as in the area of implementing thin streets and the issues of incorporating the recommendations of the task force into the area plans.

It’s really important that people understand that there’s a difference between the function of council that looks at heights and densities and uses. When an application comes forward [to the Development Permit Board], [it] is in accordance with the policies and the overall zoning regulations that council has approved. The Development Permit Board, then, looks at the details of how the building’s design responds to the conditions.

MP:  Do you have new plans for engaging with community groups who are concerned about affordability and community plans for neighbourhoods?

BJ:  The first is making sure we develop a community outreach that tries to achieve as much public participation as we possibly can, using traditional and non-traditional methods. For example, I was just down in the Downtown Eastside for a day-long workshop that had been set up by staff.

I thought that the cross-section of people that attended that meeting was amazing: young and old and condo owners and people who live in SROs; there were people from First Nations. I think there was a real, concerted effort to make sure that there was a broad spectrum of people participating. They had more than 80 people there for a full day’s session. And they were coming up with great recommendations for moving forward with policies in that area. I think we have to do that with all our area plans.

We have to be as up to date as we possibly can, using all the social media techniques for those people—not necessarily us, me—who are very adept at social media. But we also have to look at the traditional methods and non-traditional methods to make sure that we get people who are and aren’t connected to the Internet and that they know about the community plans. 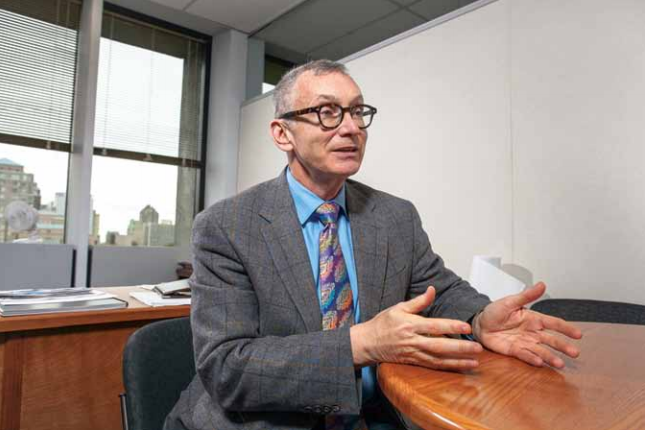 MP: Vancouver’s population is expected to grow exponentially over the next few decades. What is your vision for managing growth in Vancouver?

BJ: I think that growth can be managed well in Vancouver. The infrastructure is there in terms of the transit that is built and/or contemplated. The City has a wealth of park space and open space, and community amenities, and community facilities in place to accommodate people moving into Vancouver. I think that it can be done in a way that doesn’t have to scare people.

We’re looking at how to carefully do it, [so it] maintains the character of those areas. And in some cases, it is leaving the communities alone in terms of not encouraging new forms of development in some of the more stable single-family neighbourhoods.

When you look at the amount of the land base we have here in Vancouver, in order to accommodate growth, it’s going to be a very low percentage of the overall land base of the city. And so I think that when you look back 20 years, when you look forward 20 years, you’ll be able to recognize Vancouver. But you will be looking at good development along major arterials and adjacent to the downtown, because it helps to achieve more walkability, more livability, eyes on the street; all the things that we’re looking for in terms of creating a healthy city.

MP: Do you have lessons from Richmond as to how to manage growth in an urban setting?

BJ:  It’s important to put in place the plans as quickly as you possibly can in those areas where you’re anticipating growth. When you come forward with the plan, you have to make sure that the implementation strategy is part of it so that people understand what the community amenities that are going to be coming as part of growth is going to be happening, and then who pays for it.

When you do that as a package, which was done in Richmond, especially in the City Centre Area Plan, but also in the West Cambie area, which is the two areas where the bulk of the developments happening in Richmond—when you put that in place, then the development that follows after, if it’s in conformance with the previously approved plans, it tends to be less controversial.

MP: Do you think building density in Vancouver is part of the solution to improving housing affordability?

BJ:  When you increase the housing supply, that is a way of attempting, without other levels of government support—financial support—as a way for the City to do what it can, with all the levers that it has, to try and ensure that we provide a variety of housing types for the people who live here and want to live here, but also provide a range of housing affordability as well. So yes, selective density, in key locations, is a way of addressing the housing affordability issue.

MP: What do you make of the ShortTerm Incentives for Rental (STIR) program? Do you see it as a success?

BJ: Before council put in place the STIR program, there were no rental units being constructed at all: no market, no below-market. So the City took it upon itself a couple of years ago to look at the ways, the financial ways and the non-financial ways, to encourage residential rental accommodation. It provided some incentives through a fast-track process, but it also looked at forgiveness of some fees.

I think it is a success because it has generated hundreds of new residential units, which are now under construction, as well as through the son of STIR program, the STIR 100, it’s generating hundreds more.

I don’t think that would have happened had council not taken the initiative. The margins for constructing rental housing, with the cost of land that we have in Vancouver, are so razor-thin for developers that they wouldn’t have done it without that little bit of a boost that council gave them.

MP: What is it about urban planning and cities that keeps you inspired about your work?

BJ:  In Vancouver, we’re living in an extraordinary time. We’re one of the very few cities in the world that is growing the way we’re growing: not too fast, not too slow, in my opinion—and we’ve got concerns for the built environment in terms of good architecture. But we’ve also got concerns for the environment and sustainability and affordable housing and trying to do something for the hard-to-house and the homeless.

We live in an extraordinary place. And it just is very exciting to feel like I can make a difference in any or all of those particular aspects. All we do as planners is provide our best professional advice to city council. We’re often between council and the developer, between the public and the developer. It is the profession in between. And the best we can do is to provide our opinion as to what we think is the appropriate action and make those recommendations to council.

I think that we’re all in this together; it’s all of our city. And I’m looking forward to creating opportunities where people can realize that we’re all going in the same direction. It’s a wonderful thing that we get to do in terms of creating and enhancing this wonderful place.