join us donate
LOG IN or SIGN UP
Liquid syntax error: Error in tag 'subpage' - No such page slug join
find a vendor
November 23, 2012 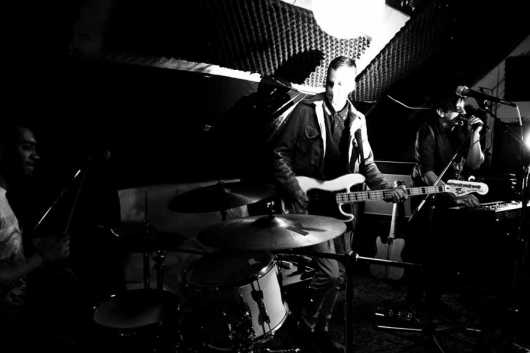 The event began about six months ago as a way to create a sense of community and showcase local talent. Each night has three Vancouver bands, with its latest incarnation comprising Blank Cinema, Ghost House and Spell tonight, November 23rd.

“We want to establish more of a rapport with the neighbourhood and with the people who listen to the station,” says outgoing production coordinator and event organizer Jordan Mitchell. “There have been a lot of repeats, many people come back, which is very cool.”

So far, CJSF chooses the bands based on genre, album releases and word of mouth. Spell, for example, just released their second EP Lull and by next Friday will have returned from a western Canadian tour.

“I’m pretty excited for the show,” says Spell lead vocalist PrOphecy Sun. “People can really expect to be mystified, to draw upon their internal struggles. It’ll be a simple set up, our stuff is emotionally driven.”

PrOphecy Sun describes Spell as dark and ambient with electronics and beats brought in by her band partner Kristen Roos. The duo improvises the recording process, as Roos sets up the music while PrOphecy Sun adds the vocals in one take.

“I find the more time I put into practicing and rehearsing, the more unnatural the sound feels,” she says. Getting Blank Cinema involved was more coincidental than album-based. Mitchell ran into vocalist Jake Fox at Long & McQuade while browsing for some instruments.

“I thought it was a great idea when Jordan approached me,” says Fox, who works at the music store. “It’s always good to promote local bands and put the focus on Vancouver talent because there’s lots of it. For some reason, it’s always tough in a city to get people interested in local talent.”

Blank Cinema formed in 2008, but has recently added two new members, due to one member moving to New Zealand. One of their first shows with the new lineup was at Olio Festival in September.

At any given show, the band promises enthusiasm and some yelling, encouraging lots of foot stomping from the audience. Ultimately, Blank Cinema is “a lot of people playing different noisemaking machines.”

For Ghost House, Mitchell drew from his SFU connections and approached guitarist Katie Lapi about performing at November’s show. “Some people aren’t aware of what’s going on in the city, so this is a great way to bring out more bands,” says singer/pianist Jesse Gander, who is also recording engineer at The Hive Creative Labs Burnaby location.

The five-piece band has a dense sound with a lot of vocals, as every member sings. A pop band with a fast and frantic rhythm, Ghost House might manage to get the crowd dancing, a rare feat for notoriously Vancouver concert goers.

Mitchell hopes to continue CJSF Presents at Pat’s Pub into the new year after a holiday break in December. Draft plans include a folk/blues show in January and a hip hop one in February where CJSF would partner with W2.

“Sometimes people find it difficult to get into the music scene here,” says Mitchell, who’s been a musician in Vancouver for close to 20 years. “For these shows, anybody can come out and dance, so hopefully they will.”

The first instalment of CFSF Presents at Pat's Pub starts TONIGHT at 10pm. Tickets are $8 at the door. For more information, check out the Facebook event page.