join us donate
LOG IN or SIGN UP
Liquid syntax error: Error in tag 'subpage' - No such page slug join
find a vendor
December 05, 2011 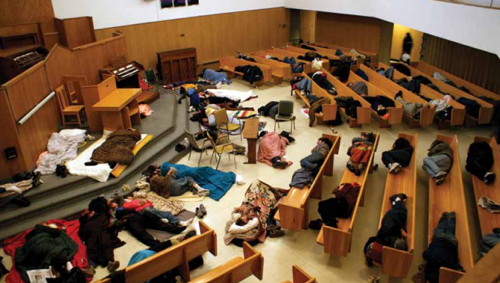 First United Church in 2009. The pews have since been removed to make room for more beds. Photo by Jay Black

Vancouver’s signature mix of rain and sleet is back again, and the harsh winter that people have been bracing for and talking about for months is finally settling in. Yet the city’s homeless shelters, typically packed to capacity over winter months, continue to struggle with a contentious hot-and-cold provincial funding landscape that persistently jeopardizes Vancouver’s most marginalized citizens.

Twisting in the wind has been the name of the game for Sandra Severs, deputy executive minister of First United Church. The Downtown Eastside church was the first homeless shelter opened under Mayor Gregor Robertson’s Homeless Emergency Action Team (HEAT) in winter 2008.

The church is packed to its fire-code capacity of 240 shelter spaces on most cold nights. It receives $243,000 of operating funding from BC Housing, and that funding is now scheduled to run out by the end of March 2012.

Despite the shelter’s uncertain future past next spring, the March closure date comes as a relief after Severs was first notified the funding would be cut in half by the end of December 2011. That would have likely resulted in the loss of 120 beds at the height of the winter shelter season.

When Severs spoke with Megaphone on the morning of November 18, the future of the First United shelter swung from dire to more stable. A meeting that afternoon with BC Housing revealed the funding would not, in fact, be cut in half in the middle of the winter as was originally expected.

That kind of abrupt, on-and-off funding shift has been a regular occurrence with HEAT shelter funding all along. It’s created an uncertain shelter landscape despite the obvious need for stable, abundant spaces.

‘What kind of housing would work?’

A provincial housing representative did not return Megaphone’s request for comment on the future of HEAT shelters. However, an October 11 press release announcing the continued winter 2011 operation of three HEAT shelters—First United Church, Central Street and Stanley-New Fountain—included a quote from Rich Coleman, B.C. Minister of Energy and Mines and Minister Responsible for Housing.

“The opening of 309 new supportive apartments since April this year has reduced the need for the 160 temporary Winter Response spaces that we have funded in past years,” Coleman said in the prepared statement.

Coleman justified the spring HEAT shelter closures with the construction of new permanent housing units this year. But the addition of new permanent housing units is cold comfort for the hundreds of people who use the shelter at First United Church. The church offers refuge to people for whom the province and city lacks a housing strategy, Severs says. The shelter occupants there are among the most marginalized of the city’s homeless population, and would require more specialized supports than a standard supported Single Room Occupancy (SRO) unit would provide.

“There’s a core group of people in the city that we don’t have a strategy for, who are the most street-entrenched, who might, if the weather gets really bad, might come indoors. We’ve worked with these people over the last four winters, and we think that there needs to be some effort made to think creatively about what kind of housing would work for this group,” Severs says.

“What happens for people who are disconnected with any sense of community, who have extremely low social skills, who might be illiterate, who are brain damaged: what kind of housing works for those individuals? I’m not convinced that putting people in a supported SRO is going to meet the needs that they have.”

An end to the funding

Not every housing type works for everyone. But finding the right fit takes time, and shelters offer needed spaces for people to stay before they get into housing, says Sarah Blyth, a park board commissioner and mental health worker at the StanleyNew Fountain Shelter. The New Fountain, located on Cordova Street between Carrall and Columbia Streets, has been packed to capacity since it opened under HEAT in winter 2008.

The New Fountain receives funding for 27 beds, but it houses 40 to 45 people per night. Blyth estimates that 500 people have accessed jobs and housing through the New Fountain since the shelter’s inception.

“Putting people into the proper housing where they can get the support they need has been really important,” Blyth says.

The New Fountain offers a safe space for people to stay while on the wait list for housing that best fits their needs. Finding appropriate housing supports for individuals is crucial for their long-term success in permanent housing, Blyth adds.

In the meantime, positive, often transformative, communities of support and friendship have flourished at the New Fountain, due in large part to the extraordinary community building efforts of Blyth and other New Fountain staffers. The popular Portland FC street soccer team originated from that shelter.

These days, former residents who are housed have returned to volunteer with the New Fountain to build community gardens and develop the soccer pitch at Hastings and Abbott Streets. “It’s quite a beautiful thing to see happen,” says Kailin See, who opened the New Fountain with other Portland Hotel Society staff in 2008. “None of it would have been possible if the shelter had closed.”

But just like in spring 2011, funding for the Stanley-New Fountain is set to run out by the end of March 2012. A 24-hour soccer relay and extensive public awareness campaign put pressure on the provincial government to re-instate funding in April 2011. As has been the case for all HEAT shelters, however, the New Fountain future remains uncertain past spring 2012.

See and Blyth have stayed optimistic despite the shaky situation. Their aim has always been to create positive awareness about the shelter to support its continued livelihood.

“We’re trying to improve people’s lives so that they can be independent, so they can have jobs, so they can have selfconfidence. Because that’s ideally how we all want to live,” Blyth says. To her and See, keeping the shelter open is simply “the right thing to do.”

Given the province’s history of making last-minute funding announcements to open winter homeless shelters, Spencer Chandra-Herbert also remains hopeful that the HEAT shelter in the West End will re-open this winter. The NDP MLA for Vancouver-West End helped open the 40-person shelter at Cardero and Alberni in December 2010. The shelter, operated by RainCity Housing, was the first ever to operate in the West End. It closed in April 2011.

The West End shelter served a population that otherwise camped in Stanley Park or on the streets. It was important for West End shelter users to stay in their neighbourhood and not need to travel to the Downtown Eastside to access services, he says.

“People did not want to go to the Downtown Eastside where there were some shelter spaces or where [Rich Coleman] said there were shelter spaces, despite the fact that they were often full,” he says. “They wanted to stay here to avoid drug dealers, to avoid bad memories of things that may be have gone wrong in that community for them, and also because they felt that this was their home.”

“We know the shelter spaces are needed. My suspicion is Rich Coleman and the Liberals have used it as a bargaining chip with the City to try and pressure council, pressure the mayor’s office, because otherwise, there’s no good reason why they would do this,” he says.

“They could easily have announced ‘this is going to be a three-year program’ until more housing comes on stream, and then re-assess. But instead, every year was a battle to get it to happen.”

At a November 7 mayoral debate on homelessness and affordable housing, Robertson expressed similar optimism that the province would come through with last-minute funding for more HEAT shelters this winter.

“Increasingly, it’s come down to the early weeks of December for the funding to come through,” Robertson said. As the winter weather picks up, extreme weather alerts for local emergency shelters will demonstrate the persistent need for shelter spaces for the estimated 1,605 people who live on Vancouver’s streets.

The Greater Vancouver Shelter Strategy (GVSS) lists 10 shelters for people of all ages and genders in the City of Vancouver. Additionally, there are four youth-only agencies, three men-only shelters and two for the exclusive use of women.

Using numbers collected by the GVSS in January 2010, Vancouver had 1,074 shelter beds and 217 cold wet weather beds (cold wet weather beds are opened during extreme weather alerts), comprising a total of 1,291 shelter spaces.   Even by the most optimistic estimations that some shelters may take on more people than the spaces they’re funded for, the total number of shelter spaces still falls at least 314 beds short of providing indoor overnight space for Vancouver’s total homeless population. That number is likely higher because the Metro Vancouver Homeless Count is widely understood to be an undercount.

With a Vision Vancouver-dominated council one week into another three-year municipal term, the task of ending street homelessness by 2015 remains a noble yet complicated goal. Vision councillors Geoff Meggs and Kerry Jang told reporters that they plan to push the provincial government for more shelter funding this winter following their re-election last weekend.

“Mayor Robertson was extremely courageous in that first week of his first [2008] term to hold out this vision of ending street homelessness by 2015, but that’s going to be quite difficult given the situation,” says Severs of First United Church. “There’s potentially a large group of people who are extremely marginalized and very difficult to work with and are not going to easily housed.”